A Sotheby’s exhibition in Dubai is showing off masterpieces from Middle East artists that will be up for sale in London next month.

The three-day exhibition of modern and contemporary art by Middle Eastern artists, which opened yesterday, is being held at Dubai International Financial Centre (DIFC) in the UAE city.

The exhibition coincides with the Art Dubai fair, which is currently under way as part of the UAE city’s Art Week festival.

It features some of today’s most celebrated artists from the region including Monir Farmanfarmaian, Farhad Moshiri and Shakir Hassan Al-Said.

These works will be offered for sale at Sotheby’s London as part of a week dedicated to over 1,000 years of Arab and Iranian art.

Middle Eastern Art Week, which will take place in the UK capital from April 15 to 22, includes Sotheby’s relaunched 20th Century/Middle East Art sale and a single-owner sale of works from the collection of an anonymous Iranian-French collector, artist, designer and curator.

Ashkan Baghestani, Sotheby’s Contemporary Arab and Iranian Art Specialist and Head of Sale, said: “We are hugely excited to present a treasure-trove of artworks from across the region and cultures for our Dubai exhibition. Together these works chart a history of modern and contemporary Art in the Middle East, with a particular focus on portraiture. They will form part of a ground-breaking week of London auctions, including the first-ever Iranian single-owner sale in the UK – a collection that reflects decades of connoisseurship defined by cross-cultural encounters.”

Works on view at the exhibition include:

Farhad Moshiri, Untitled (From the Jar Series), 2001 (est £100,000-150,000/$143,000-214,000)
Reinterpreting the traditional Persian calligraphic practice sheets widely mastered during the Safavid dynasty, this work marks the beginning of the artist’s exploration of the writing system’s physical and symbolic significance. Moshiri draws on Eastern and Islamic aesthetics to celebrate the visceral beauty of form, whilst hinting at the exciting possibilities of hidden meanings. Part of his first exhibition in 2001, in Tehran, this painting was acquired directly from the artist in 2002.

Mahmoud Mokhtar, On the Banks of the Nile, 1921 (est £120,000- 180,000/$171,000-257,000)
Mahmoud Mokhtar depictions of the struggle for political independence and the emancipation of women in Egypt in the first decades of the 20th-century are unparalleled. This work, characterised by the elegance and determined posture of the present water carrier echoing the aesthetic of the great sculptures of Ancient Egypt and the fashionable Parisian Art Deco, is typical of his oeuvre.

Au Bord du Nil represents the peasant woman who was adopted as the emblem of Egypt’s revolutionary movement. She stands tall, poised to adjust her veil, revealing her feminine beauty whilst carrying out the menial but essential task of sourcing water from the river. Her frontal pose and the stylised visage and folds of the drapery are reminiscent of statues of Egyptian queens. As such the figure at once symbolises ancient and modern Egypt and the reinstatement of the woman at the centre.

Mokhtar moved to Cairo from the countryside in 1902 and was amongst the first to enroll in the city’s new School of Fine Arts six years later. He famously said, ‘When I was a child, there had been no sculpture and no sculptor in my country for more than seventeen hundred years’, becoming the first Egyptian sculptor to follow the pharaonic tradition of sculpting. His sculptures now form part of Cairo’s architecture, a life-size marble version of this work stands at the entrance of the Mokhtar Museum and an example was initially showcased at Exposition Universelle in Paris in 1930.

The present work is the largest of its kind to appear at auction, an iconic testament to the father of modern Egyptian sculpture.

Monir Farmanfarmaian, Mirror Ball, circa 1976 (est £45,000-60,000/$64,000-86,000)
Mirror Ball is a timeless yet contemporary work that brings together the decorative elements of Iranian traditional craft with Western abstraction – in playful yet poignant homage to Islamic geometry and the glitz of 1970s American pop culture.

It was Farmanfarmaian’s 1966 visit to the Shah Cheragh Shrine in Iran that truly redefined her artistic trajectory.

Adorned with mirror mosaics, the architecture, the light and the people were said to have felt like a mystical performance to the artist.

Immersed in New York’s avant-garde scene, she mixed with the likes of Frank Stella, Mark Rothko and Andy Warhol. Warhol famously kept a similar work on his desk in his Madison Avenue home until his death – a gift from the artist.

Her recent retrospective at the Guggenheim Museum, New York in 2015 featured an important series of these glittering and rare mosaic balls. Her works have long been met with international acclaim, from being awarded the Gold medal at the Venice Biennale in 1958 to her installations for the Victoria and Albert Museum in London.

Shakir Hassan Al-Said, The Woman, The Moon and The Branch, 1954 (est £65,000-85,000/$93,000-121,000)
The Woman, The Moon and The Branch is one of the most important works by renowned Iraqi artist Shakir Hassan Al-Said ever to appear at auction. Among the leading figures of Arab artistic heritage, the artist has pushed the boundaries of Iraqi modernism and played an integral role in establishing the influential Baghdad Group of Modern Art.

Merging past and present in beautiful harmony, this iconic depiction of a Mesopotamian woman encapsulates the artist’s clear shift towards cubism and abstraction whilst drawing on ancient folkloric iconography. The angular and exaggerated lines suggest a strong parallel with Picasso, yet the palette is drawn from colours found in Iraqi ancient carpets.

The figure looks towards to the future as a symbol of Iraq’s walk towards modernisation, particularly at a time when the country was going through major socio- political change.

Paul Guiragossian, Karantina Camp (Bourj Hammoud), circa 1964 (est £30,000-40,000/$43,000-57,000)
One of the most versatile and avant-garde Lebanese painters of his generation, Guiragossian was born to Armenian parents, survivors of the Armenian Genocide and experienced the consequences of exile from a very tender age. Karantina Camp is an emotive landscape scene of a migrant camp on the outskirts of Beirut, where Armenians in exile were originally placed and began to rebuild a new home – a rare work with a deeply personal resonance to the artist but universal motifs.

As part of a series done in response to the plight of Armenian migrants in the 1960s, the work expresses the heaviness of exile, yet coloured with hope. The painting is a beautifully poignant record of old Beirut and the subsequent birth of a constructed hometown – and one which has special meaning after the Karantina Camp massacre of 1976.

This April marks the 40th anniversary of the first Islamic art auction in London, which was pioneered by Sotheby’s in 1976 following the World of Islam Festival opened by Queen Elizabeth II. Sotheby’s London will be staging the most wide-ranging week of events to cover over millennia of history of art from the Middle East. The unique group of fascinating sales will be accompanied by a programme of talks and lectures by leading scholars of the region.

The Library of Mohamed and Margaret Makiya - April 19
The single-owner sale of the library of distinguished Iraqi architect Mohamed Saleh Makiya, who died last year aged 101, reveals a collection of rare books and works on paper that embraces the culture of the Middle East and the wider Islamic world, and its connections with Europe.

The Orientalist Sale – April 19
The Orientalist Sale showcases important Orientalist paintings of Turkey, North Africa, the Levant, and the Middle East. These paintings are coveted as fascinating glimpses into the history of these countries before the widespread use of photography and when representative painting was little practiced by local artists. The auction includes works by John Frederick Lewis, David Roberts, Ludwig Deutsch and Rudolf Ernst.

Arts of the Islamic World – April 20
Beautiful objects with stories of over a thousand years of artistic exchange and influence in the Islamic world from China, to India, Persia, Turkey, North Africa and Europe. The highlight of the Arts of the Islamic World auction is a magnificent Ottoman tortoiseshell, mother-of-pearl and brass-inlaid scribe’s box of exquisite craftsmanship from the sixteenth century. One of the earliest works included is an extremely rare Qur’an leaf written in Eastern Kufic script on a background of delicate foliate scrolls from a manuscript dated between 1075 and 1125 AD.

Alchemy: Objects of Desire - April 21
The first-ever single-owner modern and contemporary Iranian sale, the collection of a major Iranian artist and curator brings together a treasure-trove of artworks from across continents and cultures.

An artist himself, he has also been one of the key figures in the development of forward-looking Iranian art-serving as a mentor to up-and-coming artists, opening a space in Tehran and participating in major shows around the world.

His works are held by museums such as The British Museum in London, the Metropolitan Museum of Art, New York and the Centre Georges Pompidou, Paris. 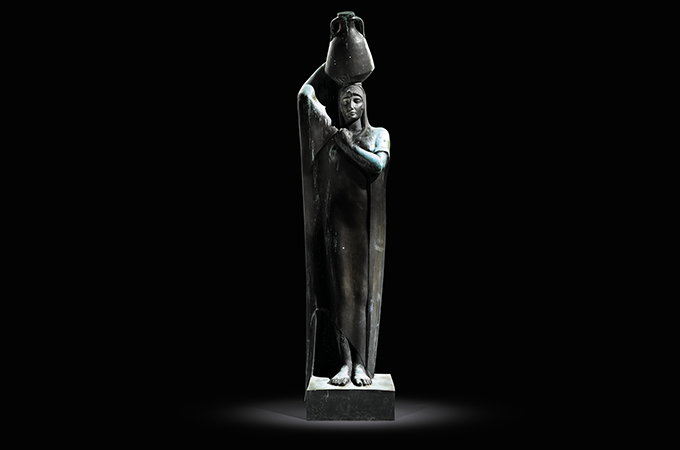 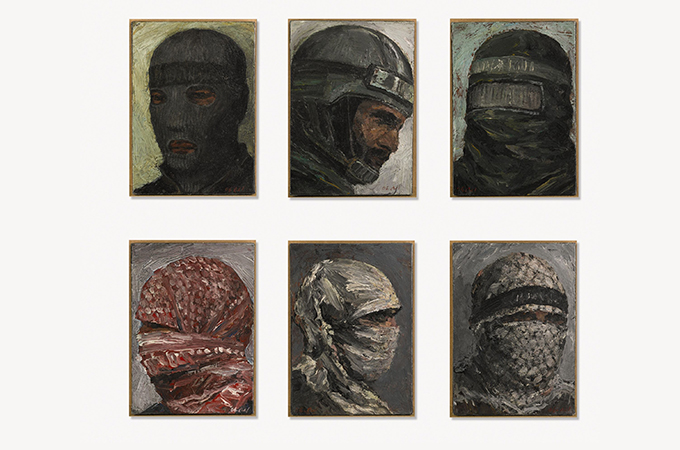 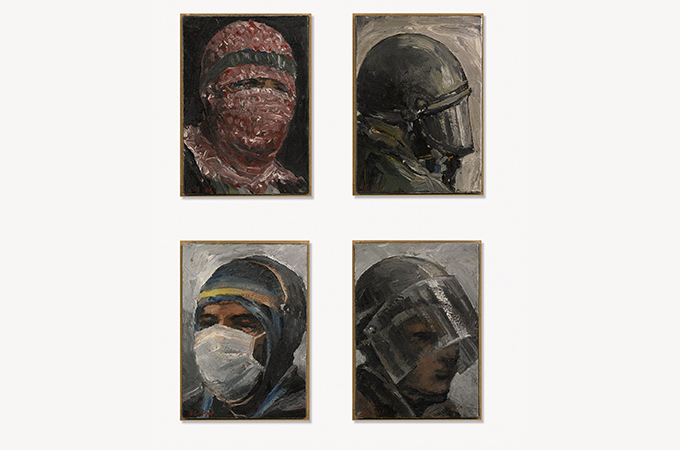