Business aviation across the world is expected to grow by an average four per cent over the next decade with $280 billion worth of jets sold over the period, a report has revealed.

However, the Middle East and Africa is lagging behind because of political upheaval, lower oil prices and health crises, currently accounting only for 3 per cent of global demand, Honeywell said in its 23rd annual Business Aviation Outlook.

The 2014 Honeywell outlook reflects an approximate 7 to 8 per cent increase in projected delivery value over the 2013 forecast. Slightly higher unit deliveries are coupled with modest list price increases and the continued strong showing of larger business jet models in the delivery mix to generate the growth.

Honeywell forecasts 2014 deliveries of approximately 650 to 675 new jets, a single-digit increase in percentage growth year over year. The improvement in deliveries expected in 2014 is largely due to programme schedule recoveries, new model introductions and additional fractional uptake.

Despite lower overall purchase expectations, operators continue to focus on larger-cabin aircraft classes ranging from super midsize through ultralong-range and business liner, implying these types of aircraft will command the bulk of the value billed from now until 2024. This large-cabin group is expected to account for more than 75 per cent of all expenditures on new business jets in the near term.

Another notable finding in the 2014 survey is the improved interest levels for midsize and small-cabin aircraft in operator purchase plans. While large-cabin models still garner the largest share of specific buying plans, the midsize and smaller models recovered some share for the first time in several years, reflecting improved prospects for popular production models as well as stronger interest in newer models just now available or soon to enter service.

This year, Honeywell sees a realignment of near-term regional market shares. The overall level of forecast aircraft demand coming from inside North America slipped back after increasing for the first time since 2010 last year. Roughly 59 per cent of projected demand comes from North American operators, down two points from the 2013 survey.

Honeywell first began spotlighting growth in the BRIC countries (Brazil, Russia, India and China) in 2011. Last year, these results led the survey with 42 percent of respondents reporting acquisition plans. This has lowered to 29 per cent in the 2014 survey, but remains above the world average of 23 per cent. Of the BRIC countries, Brazil remained a bright spot by recording the strongest new aircraft purchase plans in the survey. Overall, the BRIC countries still retain a relatively strong near-term demand profile with 45 per cent of intended new jet purchases scheduled for the next two years.

Operators in the Asia Pacific region report new jet acquisition plans for 12 per cent of their fleet. This is much lower than the 24 per cent reported last year and has slipped below the world average. Disappointing growth from several major regional economies, higher levels of regional tensions and government austerity have muted operator enthusiasm. As a result, the total share of global demand over the next five years for Asia Pacific is about 3 per cent, off two points from 2013 levels, Honeywell said.

The share of projected five-year global demand attributed to the Middle East and Africa moved below its historical range of 4 to 7 per cent to 3 per cent this year.

In the Middle East and Africa, 18 per cent of respondents’ fleets are projected to be replaced or added to with a new jet purchase, down from 26 per cent last year. The level of purchase plans is under the world average and unsurprising in that it has been a year of significant political upheaval and ongoing conflict in the region as well as a year in which oil prices have drifted lower and health crises have emerged in Africa. Regional distress has taken a toll, with operators in the region scheduling their purchases later in the next five-year window than expected last year, with only 21 per cent of purchases planned before 2017, the report said.

Latin America’s survey results indicate 28 per cent of the sample fleet will be replaced or added to with new jet purchases, which is 11 points lower than last year’s result. The 2014 results remain above the world average, and planned acquisitions remain more front-loaded than the world average, with almost 47 per cent of this region’s projected purchases timed to happen between 2014-2016. As a result, Latin America’s share of total projected demand holds relatively steady compared with a year ago at 17 per cent.

North America has seen new jet purchase plan levels slip about six points to 22 per cent after averaging near 25 per cent for the past six years. Though buying plan levels might be moderate when compared with emerging markets, North America represents nearly 60 per cent of projected global demand for the next five years based on the region’s larger installed business jet base, affirming the region’s unquestionable importance to the industry’s future.

Europe’s purchase expectations jumped this year to 31 per cent, and are now back in line with the 30 to 33 per cent levels seen in the three surveys before 2013. The European share of estimated global five-year demand also moved back in line with norms at 18 per cent in the 2014 survey, the report said.

Within the current setting, the buoyancy of operator attitudes is surprising. Russia, which supported the region before 2013 with strong local purchasing ambitions, has slipped in reported purchase plans in the 2014 survey, as Western sanctions expanded over the Ukraine crisis. Honeywell notes that Russian responses in this year’s survey were again limited, so the small sample has an added element of volatility

Honeywell Aerospace products and services are found on virtually every commercial, defense and space aircraft, and its turbochargers are used by nearly every automaker and truck manufacturer around the world. The Aerospace business unit develops innovative solutions for more fuel-efficient automobiles and airplanes, more direct and on-time flights, safer flying and runway traffic, along with aircraft engines, cockpit and cabin electronics, wireless connectivity services, logistics, and more. The business delivers safer, faster, and more efficient and comfortable transportation-related experiences worldwide. 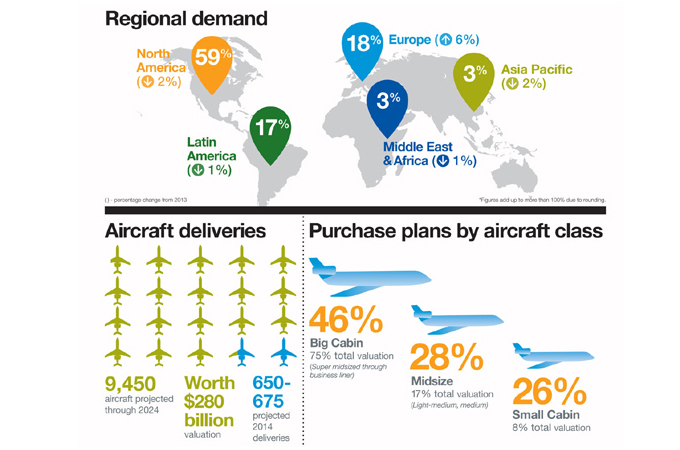