Lufthansa Technik and Airbus Corporate Jets have renewed their Elite Cabin agreement, building on a co-operation which begun in 2005, when the ACJ318 was launched.

Revealing the news at the National Business Aviation Association (NBAA) Convention and Exhibition which is currently under way in Orlando in the US, Lufthansa Technik said the agreement has been extended till 2020.

Under the initial agreement, Lufthansa Technik was contracted to design, in partnership with Airbus, and then to outfit, the cabins of ACJ318 aircraft.

The pre-defined cabin of the ACJ Elite introduced the wider and taller cabin of the Airbus ACJ320 family to a broader market, while continuing to give customers a choice of options and a wide range of colours and fabrics. These options now also include more floorplan variations.

Airbus ACJ318s were initially equipped with Elite cabins by Lufthansa Technik’s completion centre in Hamburg, but the work was shifted later to the company’s US-subsidiary BizJet International in Tulsa, Oklahoma.

Deliveries of outfitted Airbus ACJ318s began in 2007, and 19 of them have been produced so far. They are in service with clients around the world, including several VVIP charter companies.

The first of an updated version, the Airbus ACJ318 Enhanced, has just been completed. It introduces as standard several features that were previously only options - such as domed ceilings throughout the cabin - as well as introducing further optional features.

To support sales activities and customer talks, Lufthansa Technik’s Creative Design department has developed an IT-based configuration tool for the ACJ Elite programme which can be used on different electronic devices. The tool offers the possibility to demonstrate the large variety of cabin configurations of the ACJ Elite and to adapt the cabin layout quickly to individual customer needs including the visualization of different colour concepts. 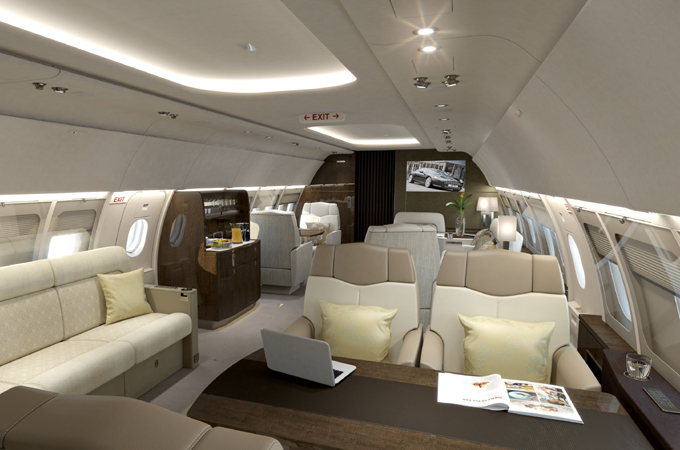