Modern Iraqi art collected by the Director of the American Friends of the Middle East, Orin Parker and his wife Rita, will be offered by Christie’s this month.

Along with their five young children, the Parkers lived in Baghdad from 1960-65, and created one of the most diverse and historically important modern Arab art collections from an American family to come to the market. The collection comprises 21 works by the then-emerging artists including Faeq Hassan, Dia Al-Azzawi and Lorna Selim, with estimates from $3,000.

David Parker, the youngest of the couple’s five children who was born in Baghdad, remembers their daily swims at the Alwiyah recreational club, and to frequent showings at its outdoor cinema and camping trips to explore archaeological sites across the country at Ctesiphon, Ur and Babylon.

Orin Parker (1923-2014) was the director of the American Friends of the Middle East (AFME), a non-profit organization founded in 1951 that was dedicated to promoting US-Iraqi relations. The fruits of this intercultural dialogue opened up many opportunities to interact with the artistic community, and the Parker’s were at the heart of it, using their position and influence to support pioneering artists like Jewad Selim, Faeq Hassan and Dia Al-Azzawi alongside other lesser-known artists within the Basrah art circle, including Maurice Haddad and Jabbar Daoud. The majority of works offered in the sale were produced and acquired within a key turning point for the country, both culturally and politically, making the collection exemplary of this crucial time period.

The importance of the Parker Collection is made in part by the treasure trove of archival images and detailed texts that have survived with the children today. Exhibition catalogues and event invitations in perfect condition and primary source documents detailing memories from important exhibitions, stately visits and cultural family outings offer a glimpse into the colourful picture of the Parkers' engagements within the Iraqi society. It also tells the story of a family of seven exploring and embracing the region.

Upon reaching Baghdad in 1960, Orin was already developing a niche insight into the modern art circles in the country, befriending leading figures like Jewad Selim and Faeq Hassan, two of the most important educators and artists of the modern movement for the following generations. Hassan and Selim were instrumental in opening Baghdad’s Institute of Fine Arts, where both men would also teach — and where Iraqi modernism was born.

Broadly speaking, the institute promoted an art which drew on the latest European trends yet remained rooted in a local tradition that dated as far back as the Mesopotamians. (Selim’s 1953 painting, The Watermelon Seller, which sold at Christie’s in 2017, is a fine example of this cultural synthesis.) Selim was a close friend of Parkers and when he died, Orin Parker was part of the procession who carried the artist’s coffin in 1961.

“The Parker collection presents a rare window into such a pivotal moment for Iraqi history as seen through an American family who were eager to support the start of these artists’ early careers. Offered at a range of attractive price points, these works narrate a story of the nascent scene that was built by local artists and patrons within these circles, including the Parkers and the importance of the support offered by the events and exhibitions arranged for them by the American Friends of the Middle East,” commented Suzy Sikorski, Christie’s specialist for the sale.

* A work from Kadhim Haider’s most important series ‘Martyr’s Epic’ depicting a significant moment in Islamic history and the political and cultural context of the 1963 coup. Painted in 1963, the work is offered with an estimate of £40,000-60,000.

* Bridging the gap between Iraqi heritage, traditional art and modern art, Faeq Hassan’s Family Group was painted in 1964 using oil on canvas and is estimated at £25,000-35,000. This painting was exhibited in 1965 at an exhibition at the American Friends of the Middle East and represents a key work for its experimentation in colour and thick impressionist brush strokes. Hassan is notable within Iraq as an arts educator, as founder of the Institute of Fine Art's painting department and known for his depictions of everyday life.

* Student of Faeq Hassan, Dia Al-Azzawi graduated in 1962 from the Institute of Fine Arts in Baghdad with additional degrees in Archaeology from Baghdad University. His artworks combined folklore imagery with popular religious and cultural iconography in his modern paintings. The oil on canvas painting Man and Woman (estimate of £40,000-60,000) was shown at the artist’s first solo exhibition at Al Wasiti Gallery in Baghdad in 1965.

* Lorna Selim, who died recently, was the wife of renowned Iraqi artist Jewad Selim and member of the acclaimed Baghdad Modern Art Group founded in 1951. Originally from Sheffield in the UK, she met Selim whilst they were both students at the Slade School of Fine Arts, London, in 1948. Lorna’s works Old Houses in Karkh and Shorja Square are painted with oil on board in 1965, representing an important body of work focussing on landscapes and architecture of old 19th Century Baghdadi houses and city centres. Both works are each offered at £3,000-4,000. 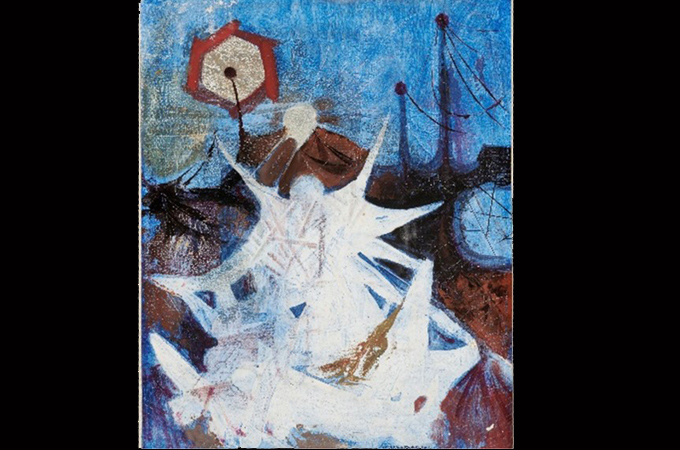 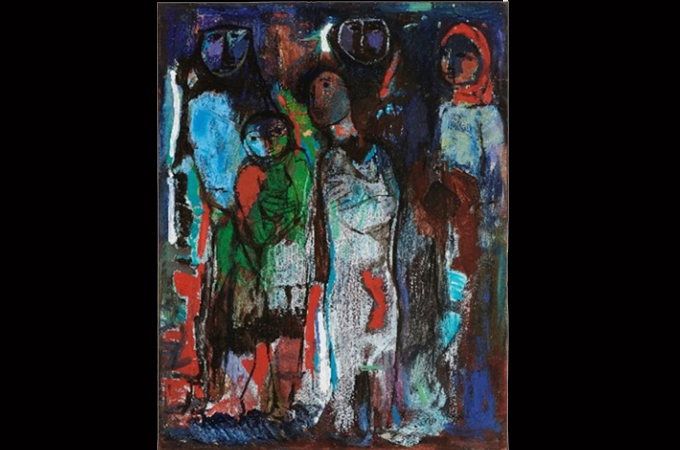