The company won the auction on October 11, at an event organised by NFT BAZL, a leading gallery bridging the gap between art and disruptive technology by leveraging DeFi and NFTs, for a whopping $56,000.

The mural is now live at the Dubai International Financial Centre (DIFC), a leading international financial hub in the MEASA region, and a destination for business, art, fine dining, shopping, and more, said a statement.

Award-winning artist Sethi, the Middle East’s first NFT artist, and creator of the 'Future NFT Dubai' AR NFT Mural, is known for her signature Voice note Art style, which exists at the intersection of art and technology, as well as auditory and visual experiences.

Sethi captures the fluid shape and structure of sound waves created by a spoken phrase, by painting the contours to reflect the meaning of the phrase - merging, art, sound and technology. Her unique approach has received coverage from well-known media platforms; and her live installations in the Middle East, Asia and Europe, have won multiple awards.

The rapidly growing global NFT art scene, and the exponentially expanding possibilities being enabled by Blockchain, have both found fertile ground in Dubai.

The Dubai government has been extremely proactive in support of these disruptive technologies, as reflected by the Emirate’s formation of the Global Blockchain Council; and the patronage of artists like Sethi, who is a recipient of the prestigious Golden Visa Residency in Dubai, for her contribution to the Digital Art Market in the UAE.

Sethi’s artwork is prominently featured at the ongoing Expo 2020 mega-event, as well; and the live display of the 'Future NFT Dubai' by the DIFC is further confirmation of Dubai’s enthusiastic adoption of these tech-enabled innovations, said the statement.

“Dubai is a city of the future, defined by its ability to constantly innovate. And I believe NFTs & Blockchain will be at the centre of innovations in the future”, says Christian Chalfoun, CTO at ColossalBit. “As a trusted consultant and advisor, to both NFT artists, as well as investors in Blockchain and NFTs, ColossalBit is thrilled to have placed the winning bid on this first-of-its-kind artwork.”

ColossalBit Management Consultancies – a company that empowers builders, makers, brands, and young startups, to establish projects, accelerate growth, and thrive in this dynamic and constantly evolving space - has further cemented its credentials by stirring the region’s collective imagination about future possibilities for these disruptive tech-enabled models with the winning bid for the world’s first Augmented Reality NFT Mural.

“This is historically significant and pivotal moment for the NFT industry, in the UAE and globally,” says Ciro Arianna CEO at ColossalBit Management Consultancies. “Dubai is unique in the world, in terms of Blockchain and NFTs getting energetic institutional and administrative support; and being home to both a growing number of creators and entrepreneurs exploring these emerging spaces, as well as an investor community that realizes the huge potential”.

“We are proud to be associated with such an important ‘world first’; as well as being involved in showcasing an artist such as Amrita, who has such a unique and groundbreaking vision. Looking back in a few years, this will be recognized as a turning point in the mainstreaming of NFT art,” Ciro concludes.

Art enthusiasts can visit the DFIC, for this first-of-a-kind experience, at the intersection of physical and digital creative expression. An Instagram filter can also be used to view the augmented reality art piece - just scan the QR code under the artist’s signature, and see the artwork come to life!

ColossalBit Management Consultancies is also a Golden Sponsor of the Crypto Expo Dubai, to be held on October 14 and 15, at Dubai Festival City, where they will unveil a free NFT drop, and extra surprises. 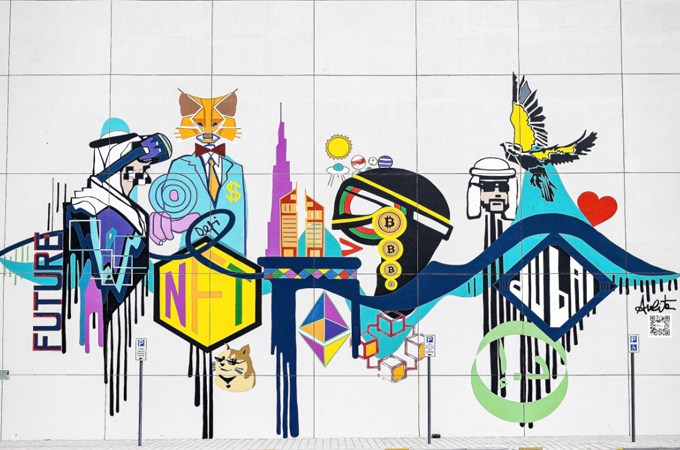