The Citation Latitude, Cessna’s newest midsize business jet, is set to make its debut tomorrow at the annual National Business Aviation Association (NBAA) Convention & Exhibition in the US, giving customers and industry observers a first look at the company’s latest in a long line of Citations, the world’s most popular line of business jets.

The NBAA event will be held in Orlando, Florida, from October 21 to 23, featuring over 1,000 exhibitors showcasing the latest products and services in the industry, nearly 100 side-by-side business aircraft at the static display, opportunities to network with 25,000 business aviation professionals and education sessions on flight safety and efficiency.

“From cabin to cockpit, customers are impressed with the expansiveness of the Citation Latitude,” said Kriya Shortt, Senior Vice President, Sales and Marketing of Cessna Aircraft Company, a subsidiary of Textron Aviation of the US.

“The superior flight functionality, performance and reliability that are inherently Citation are matched by the clean, contemporary cabin environment, superior in-flight productivity and integrated flight management suite – elevating the flight experience for both passengers and pilots.”

The aircraft on display is one of four Citation Latitudes flying in the company’s certification flight test programme, which has logged more than 600 flight hours in 260 flights. Performance improvements demonstrated in the flight test programme have prompted Cessna to update the aircraft specification to reflect an eight per cent greater range to 2,700 nautical miles at long-range cruise speed, and shorter runway performance with takeoff distance now an impressive 3,668 feet.

Type certification by the Federal Aviation Administration (FAA) is expected in the second quarter of 2015.

The Latitude is also the first business jet in the industry to feature cabin airbags for passengers in side-facing dual or single seating configurations. Taking a cue from technology prevalent in automotive airbags, the system is the first to meet new FAA occupant protection requirements and extends the Citation’s heritage for continued safety innovation.

The Latitude prototype first flew on schedule in February, followed by two additional aircraft in May and July. Cessna gained FAA Type Inspection Authorization (TIA) for the Latitude in May. The Citation Latitude is among 12 aircraft on display for Textron Aviation, which includes the four new Citation models certified in the past year – the Citation X+, Citation Sovereign+, Citation CJ3+ and Citation M2.

More than 6,600 Citations have been delivered to customers around the world since the first Cessna Citation business jet was put into service in 1972. Citations are the largest fleet of business jets in the world and have surpassed 30 million flight hours. 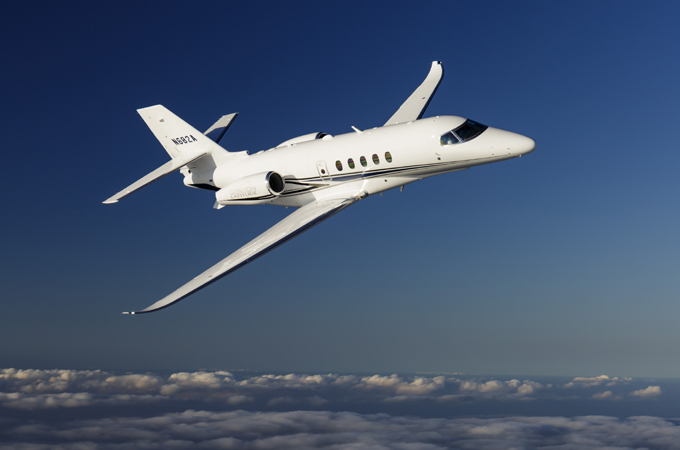