Art lovers were treated to a deep insight into a famous painting by Leonardo da Vinci at an event in Abu Dhabi, UAE, yesterday.

The fourth Louvre Abu Dhabi: Talking Art Series kicked off with a discussion on da Vinci’s La Belle Ferronnière, one of the masterpieces of the Musée du Louvre that will be on loan from France when Louvre Abu Dhabi opens next year.

Drawing attention to the first artwork by Da Vinci to be exhibited in the GCC, Vincent Pomarède, Director of Mediation and Cultural Programming, Musée du Louvre, Paris, brought to life the story and history of ‘La Belle Ferronnière’ in a lecture entitled: Leonardo Da Vinci in Abu Dhabi.

Painted circa 1495, La Belle Ferronnière was completed during the celebrated Italian Renaissance artist and inventor’s time as a court artist in Milan.

Also known as Portrait of an Unknown Woman, the identity of the young woman depicted in the painting remains enigmatic.

Different theories are discussed by specialists: La Belle Ferronnière, could depict Beatrice d’Este, the wife of Da Vinci’s then patron Ludovico Sforza, Elisabetta Gonzaga or the Duchess of Mantova. It is thought today that is Lucrezia Crivelli who is portrayed. It is a superb example of the artist’s exploration of beauty and divine geometry.

Presented by the Abu Dhabi Tourism & Culture Authority (TCA Abu Dhabi) in collaboration with the Agence France-Muséums and École du Louvre, the series will hold four more panel discussions between November and May next year.

Exploring significant themes throughout the history of art through artworks that form part of Louvre Abu Dhabi's growing permanent collection as well as key works on loan from partner institutions, this dynamic programme aims to bring together eminent specialists, curators, academics, architects, philosophers, writers and artists, whilst sharing their thoughts and ideas with the UAE public.

Hissa Al Dhaheri, Programmes Manager of the Louvre Abu Dhabi, says: “The series is a vital part of Louvre Abu Dhabi’s engagement with the scholarly community as well as local, regional and international audiences, giving the public an insight to the universal narrative of the museum. Fostering an awareness and understanding of art, history, culture and society through debate and discussion, this series will highlight key loans from the French museum in dialogue with artworks from Louvre Abu Dhabi permanent collection.”

As with previous Talking Art series, a series of talks and discussions tailored to UAE university students have been organised through sessions at their respective campuses.

Presented at Manarat Al Saadiyat located in the Saadiyat Cultural District in Abu Dhabi, the next talk entitled Museums as Sites for New Experiences will take place on the November 5. There are limited seats available throughout the series so those who are interested would do well to book in advance at www.saadiyatculturaldistrict.ae or call +971 (0) 2 657 5800.


The next lectures are as follows: 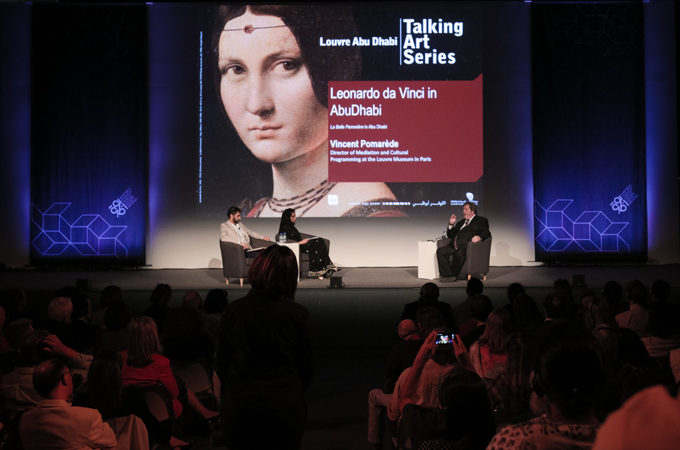