Montblanc unveiled a new edition of its Metamorphosis watch at the 2014 edition of the Watches and Wonders Exhibition, which was held from September 30 to October 2 in Hong Kong.

The Metamorphosis II is one of the most complex movements ever developed and designed in Montblanc’s workshops in Villeret, Switzerland, revealing the timepiece “in a completely new aesthetic”.

The exceptional timepiece will be produced in a limited edition of just 18 pieces, offering a unique interpretation of the metamorphosis of time, says the manufacturer.

The most striking feature of this new timepiece is its "metamorphosis" concept which is driven by a highly complex mechanical movement with 746 components. It was at SIHH 2010 when Montblanc first introduced connoisseurs to the concept of overlaid dials, which open majestically like a theatre curtain.

The aim of this unique complication is to offer a “spectacular change of design and function of the timepiece from classic time to chronograph and back using the same movement”.

Crafted entirely by hand, Metamorphosis II represents the perfect symbiosis of tradition and innovation, and will rightfully claim its place among the grand complications in the world of fine watchmaking, it says.

In the classic position, the timepiece displays the classical face of time showing the hours, minutes and date. A slide on the left side of the case is used to transform this elegant, classic indication, by revealing a new face. Additionally, the control device initiates a highly sophisticated mechanical process that transforms the dial with the classical time indication into a chronograph and new function.

The concept of the Montblanc Metamorphosis II is inspired by the opening of a theatre curtain to reveal a stage.

During the metamorphosis, which is controlled by the sliding bolt situated between "10 o'clock" and "8 o'clock" on the middle case, two wings fold in on themselves inside the lower part of the dial, gradually disappearing on each side. They unveil a chronograph counter disc for counting down the minutes, which rises gradually like a lifting ramp inside the movement until it "absorbs" the hand that indicates the date, thanks to a subtly defined opening.

Similar transformation is performed in parallel in the upper part of the dial. Two wings also move apart on the left and right sides, causing the classic time display with Roman numerals to disappear. They reveal a new dial in a new design with Arabic numerals and index, ensuring optimal readability of the chronograph face.

This process is reversible, and the opposite movement is initiated when the control device is actuated again: the sliding wings at the top and bottom of the dial are re-deployed, concealing the chronograph counter, which is once more lowered out of sight inside the movement, and bringing the timepiece's classic, elegant face back to the fore.

A total of 82 moving components, all of them meticulously crafted by hand, are involved in this extraordinary metamorphoses.

In its classic position, the Montblanc Metamorphosis II displays all the understated elements of elegance of a fine watchmaking timepiece in the most traditional sense. While the red gold case is perfectly round, the display itself is classical yet highly original. The time indication uses the regulator principle with separated hands and scales for the hours and minutes. The hours are indicated by a single hand which moves around a subdial with Roman numerals at 12 o'clock. The minutes display is even more technically complex, with its large central hand tracing a 210-degree retrograde arc between 8 o'clock and 4 o'clock. Once it reaches the ‘60’ graduation on the right of the dial, the hand instantly returns to the ‘0’ position and traces its path afresh. Finally, a small hand very clearly indicates the date on an additional dial graduated from 1 to 31 at 6 o'clock.

It takes just five seconds for the watch to undergo the transformation from classic time to a sporty, elegant chronograph face. Thus transfigured, a unique character emerges, poised for action and configured for the measurement of short intervals of time.

The emerging dial, which displays dynamic Arabic numerals, features a hand-crafted black-coloured Clous de Paris guilloché decoration at 12 o’clock for the indication of the hours, beautifully contrasting with the silvered spiral guilloché and circular-brushed satin finish of the centre part of the dial.

While the retrograde minute hand retains its original function, the central seconds hand changes its function to serve as the chronograph second hand. The chronograph minutes counter in black rises from inside the movement to the level of the dial and is actuated by pressing the pusher integrated in the crown. With its monopusher column wheel chronograph mechanism, horizontal clutch and large balance wheel with Phillips terminal curve, operating at a traditional frequency of 18,000 semi-oscillation per hour, Montblanc pays tribute to the legacy of the legendary Minerva chronographs, produced since 1858 in the Villeret manufacture. Once the brief time intervals have been measured, the slide can simply be slid across to return the Metamorphosis II to its original configuration featuring its classic face.

Incorporating 746 components made from precious materials and decorated entirely by hand - 494 of which are dedicated exclusively to the metamorphosis function - this extraordinary new timepiece is the subject of numerous patents and ranks among the most complex of contemporary watches, says Montblanc.

In the spirit of all the timepieces of the prestigious Collection Montblanc Villeret 1858, the new Metamorphosis II remains faithful to its dedication to perfection in terms of traditional artisanal craftsmanship and innovative construction, aesthetic refinement and reliability, it adds. 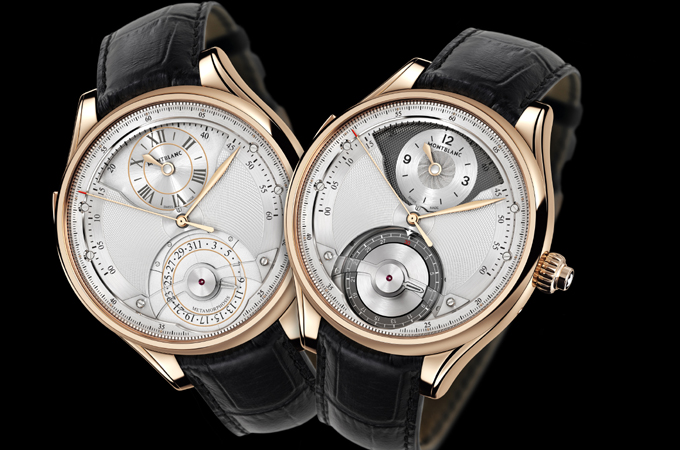