To celebrate the occasion, exactly 50 years later, a special timepiece has been created by Omega.

Combining animation with watchmaking art, this incredible Snoopy tribute has taken the Omega Speedmaster to new realms of design.

“Our favourite beagle plays a prominent role within the timepiece, first appearing as an embossed silver medallion on the blue subdial at 9 o’clock. Here, he is shown wearing his famous spacesuit, in the exact style of the silver pin that NASA astronauts give to award recipients,” says Omega.

On the caseback, Snoopy has gone into orbit, thanks to his animated black and white Command and Service Module (CSM) on a magical hand. When the chronograph seconds hand is in use, Snoopy takes a trip around the mysterious far side of the moon – just like the Apollo 13 crew – with the lunar surface being decorated on the sapphire crystal using a unique micro-structured metallisation.

The NAIAD Lock keeps all caseback engravings in the correct, upright position, including the date in 1970 that OMEGA received the Silver Snoopy Award, as well as a tribute to the imperilled Apollo 13 mission that same year.

Showing Omega’s superb attention to detail, the watch’s blue nylon fabric strap matches the other blue elements of the watch, and even features the trajectory of the Apollo 13 mission, embossed on the lining. This strap is attached to a 42 mm case in stainless steel, which is inspired by the fourth generation Speedmaster style (the first watch worn on the moon in 1969). The tachymeter scale, with the iconic “Dot over Ninety”, is shown in white enamel on a blue ceramic [ZrO2] bezel ring.

The timepiece comes with Omega’s full 5-year warranty, and will not be a limited production. Fans will receive the watch in its own Apollo 13 presentation box. 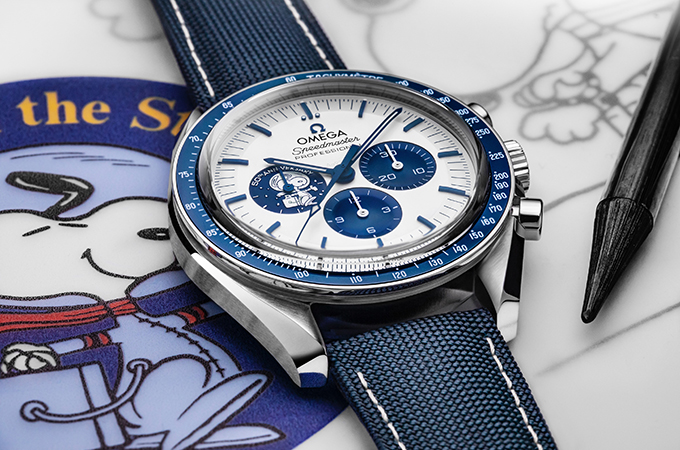