The New Rolls-Royce Ghost, the latest addition to the marque’s collection of the most refined vehicles in the world, was officially revealed in Bahrain by EuroMotors.

David McGoldrick, General Manager for Rolls-Royce Motor Cars at EuroMotors Bahrain, commented: “The New Ghost is a masterpiece of craftsmanship, it whispers its qualities; it doesn’t shout. Our founding father’s insightful saying ‘Small things make perfection, but perfection is no small thing’ stands true 116 years later and is embodied in the creation of our New Ghost.”

McGoldrick continued: “Succeeding the most successful product in the marque’s history, the New Ghost is the most technologically advanced Rolls-Royce yet, reflecting ‘Post Opulent’ design philosophy, and rejecting superficial expressions of wealth. It is a beautiful, minimalist and highly complex product; the very essence of Rolls-Royce. We are delighted to reveal the new Ghost here in Bahrain to our media friends and clients.”

The New Ghost is built on rigid aluminium Rolls-Royce spaceframe architecture, allowing designers and engineers to incorporate more technology such as all-wheel drive and all-wheel steering for unprecedented poise and surefootedness.

For effortless egress, doors now electrically open as well as close and the interior components are tuned to specific resonant frequency to create a sense of serenity. The down-lit Pantheon grille discreetly illuminates the Rolls-Royce iconography and the illuminated fascia debuts featuring Ghost nameplate surrounded by more than 850 stars. 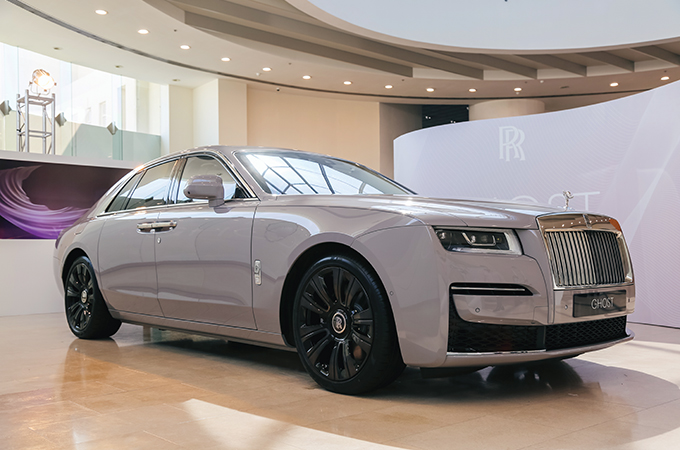