The new McLaren 765LT, a lighter, more powerful and offering even higher levels of performance on both road and track, was revealed in Bahrain by Kanoo Motors, the official retailer of British automaker McLaren in the kingdom.

The ground-breaking supercar is the latest in a line of McLaren ‘Longtails’ and the most dynamically advanced and engaging LT model ever from McLaren Automotive.

The 765LT opens a new chapter in the ‘Longtail’ story that began with the McLaren F1 GTR race car in the 1990s and elevates to new levels the attributes that underpin every LT: driver engagement, track-focused dynamics, minimised weight, optimised aerodynamics and increased power. The LT promise of being ‘limited to the few’ is also fulfilled, with just 765 individually numbered cars available globally for customer order.

Advanced carbon fibre technologies and bespoke carbon fibre LT body panels and aerodynamic features are key to an 80kg (DIN) weight reduction over the 720S. Together with power of 765PS and torque of 800Nm from the 4.0-litre, twin-turbocharged McLaren V8 engine, transmission gearing optimised for scintillating in-gear acceleration and LT-specific suspension springs and dampers, this is the basis for the wholly immersive driving experience the new 765LT delivers.

The dynamic ability and precision of the 765LT on both road and track is simply outstanding. The steering of the 765LT retains McLaren’s distinguished electro-hydraulic assistance but has been further honed with a quicker ratio and a stiffer torsion bar for even purer driver feedback. 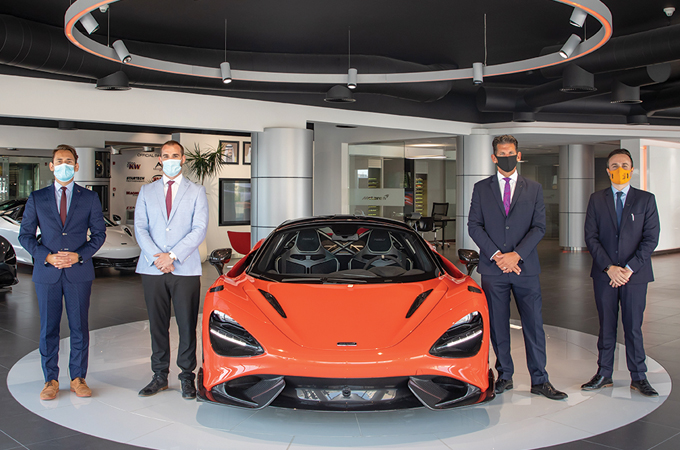