Kanoo Motors, the official retailer of British automaker McLaren in Bahrain, has unveiled the new McLaren 765LT, featuring lighter, more powerful and with even higher levels of performance on both road and track.

The ground-breaking supercar was revealed as the latest in a line of McLaren ‘Longtails’ and the most dynamically advanced and engaging LT model ever from McLaren Automotive.

The 765LT opens a new chapter in the ‘Longtail’ story that began with the McLaren F1 GTR race car in the 1990s and elevates to new levels the attributes that underpin every LT: driver engagement, track-focused dynamics, minimised weight, optimised aerodynamics and increased power. The LT promise of being ‘limited to the few’ is also fulfilled, with just 765 individually numbered cars available globally for customer order.

“The 765LT is the most accomplished and exhilarating LT model ever from McLaren Automotive. Incredible performance and astonishing levels of driver engagement – the result of hundreds of detailed engineering actions undertaken to ensure the purest possible connection between driver and car – are the stand-out attributes of an LT developed with single-minded determination to deliver a wholly immersive driving experience to those who secure one of the 765 available to customer order,” said Mike Flewitt, CEO, McLaren Automotive.

Advanced carbon fibre technologies and bespoke carbon fibre LT body panels and aerodynamic features are key to an 80kg (DIN) weight reduction over the 720S. Together with power of 765PS and torque of 800Nm from the 4.0-litre, twin-turbocharged McLaren V8 engine, transmission gearing optimised for scintillating in-gear acceleration and LT-specific suspension springs and dampers, this is the basis for the wholly immersive driving experience the new 765LT delivers.

The dynamic ability and precision of the 765LT on both road and track is simply outstanding. The steering of the 765LT retains McLaren’s distinguished electro-hydraulic assistance but has been further honed with a quicker ratio and a stiffer torsion bar for even purer driver feedback.

The aerodynamic performance of the 765LT is key to the abilities of the car on track, but also influences higher-speed road driving behaviours. The extended front splitter and elongated active rear wing work in conjunction with the carbon fibre floor, unique door blades and the extended rear diffuser to deliver aerodynamic downforce 25% greater than that available to a 720S driver.

Transmission gearing is optimised for acceleration, delivering virtually instant response to throttle and contributing to the cars benchmark acceleration figures: 0-100km/h (62mph) in 2.8 seconds (0-60mph in 2.7 seconds) and 0-200km/h (124mph) in 7.2 seconds.

Driven by a determination to minimise weight at every opportunity, McLaren engineers achieved an 80kg (DIN) saving over the superlight 720S coupé. At 622PS per tonne at lightest dry weight, the 765LT redefines the class, bettering rivals by more than 50PS per tonne.

The cockpit of the new 765LT is an enticing blend of generous interior space and excellent ergonomics, with racetrack efficiency and supercar luxury combining to create an overall ambience of cutting-edge technology and high-level craftsmanship in an environment defined by its driver focus.

A wealth of personalisation opportunities are available, from unique exterior colours and soft-grain leather to a world-class audio system, while customers who wish to explore their own unique specification can turn to McLaren Special Operations (MSO) for even greater choice. 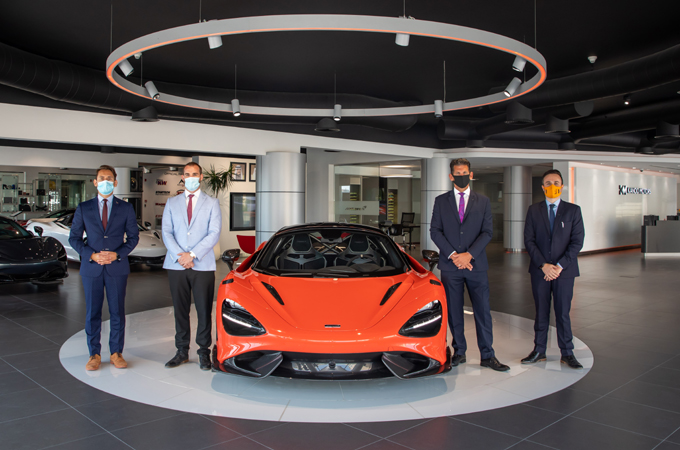 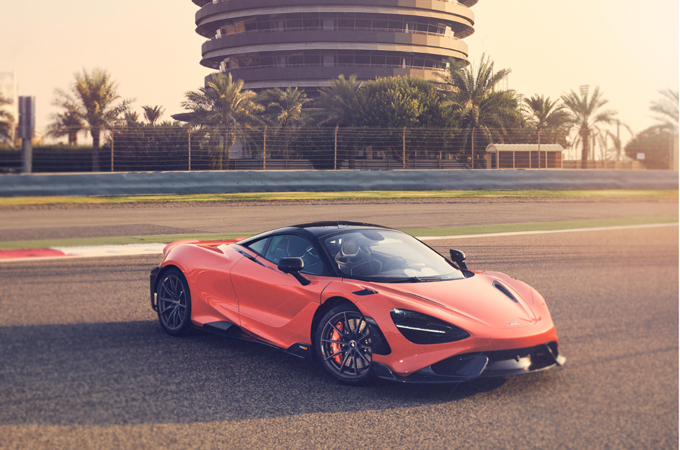