Ferrari has unveiled its Portofino M, the evolution of the Prancing Horse’s 2+ GT spider, the Ferrari Portofino.

In a move unprecedented in the Maranello marque’s 70-year-plus history, the new car’s premiere took place entirely online. The build-up to the unveiling included the sending out of a series of newsletters to clients over recent weeks at the end of which they were given access to a platform containing exclusive videos illustrating the concept behind the car, its restyling and main technical contents.

The Portofino M is the first Ferrari to be presented in the wake of the company’s temporary closure due to the Covid-19 crisis, making it the symbol of a voyage of rediscovery.

It is the (re)starting point for Prancing Horse’s pursuit of innovation whilst fully respecting its heritage, passion and constant search for perfection. All of these values are reflected in the new Portofino M. In fact, the ‘M’ in its moniker stands for ‘Modificata’, which in Ferrari nomenclature refers to cars that have undergone an evolution that has significantly boosted their performance.

The most notable technical innovation in the stunning new evolution of the Ferrari Portofino is its redesigned powertrain, a brand-new eight-speed gearbox and the five-position Manettino that includes a Race mode, an absolute first for a Maranello GT spider. As a consequence of these and many other new features, the Portofino M guarantees an unprecedented combination of authentic GT performance, driving pleasure, agility and exceptional versatility in everyday driving contexts.

This latest design and engineering masterpiece from the Prancing Horse is the perfect evolution of the Ferrari Portofino. Sportier in character than its predecessor, it also delivers superior handling whilst not only maintaining but enhancing on-board comfort, courtesy of specific new optional features, such as ADAS, and ventilated and heated seats. The Ferrari Portofino M thus retains the Ferrari Portofino’s twin soul and is the only car on the market that can rightfully be described as an authentic coupé with its top closed and a genuine spider when it is open. This is thanks, of course, to the Retractable Hard Top (RHT), the signature feature of all the Prancing Horse’s convertibles.

The Portofino M’s compact dimensions also make it ideal for all occasions. In fact, its unparalleled versatility and on-board comfort turn every trip into a voyage of (re)discovery, says the company.

A speed sensor was also added to the turbocharger assembly to measure the turbine revolutions. This in turn allowed the maximum revolutions per minute of the turbine to be increased by 5,000 rpm.

The 8-speed gearbox is a completely new unit compared to the previous 7-speed version and is based on a dual-clutch oil bath architecture. It differs from the SF90 Stradale’s 8-speed transmission in its longer gear ratios and the introduction of a mechanical reverse gear. The new layout and integration of its components have also optimised the gearbox’s size and its installation in the car.

Like all the other turbo cars in the range and in line with the “zero turbo lag” concept, the Ferrari Portofino M delivers instantaneous throttle response throughout the rev range. The car boasts Variable Boost Management, a control software developed by Ferrari that adjusts torque delivery to suit the gear selected. The result is increasingly powerful pick-up as revs rise, whilst optimising fuel consumption. As the car goes up through the gears (from 3rd to 8th), the amount of torque delivered by the engine increases all the way up to 760 Nm in 7th and 8th gear.

The new Ferrari Portofino M’s harmonious styling is the product of a global approach to design in which all the various elements are treated as part of a single whole and builds on the success of the Portofino design. This applies both to the bodywork, where the front, flanks and tail are part of a single seamlessly sculptural design, as it does to the cabin where the general arrangement of the volumes and lines is stylistically consistent. This approach can be seen in the interaction between the car’s exterior and interior.

The fact that the Portofino M’s performance is more powerful than the Portofino resulted in the Ferrari Styling Centre’s designers making very precise, targeted adjustments to highlight the model’s characteristics and underscore its sportiness.

The wraparound front bumpers incorporate imposing, sculptural air intakes that lend a decisive, aggressive look to the front of the car. They also feature a new air vent at wheelarch height, added because of the need to reduce the car’s overall drag. Part of the air flow coming off the front radiating masses is directed towards the new vents and then accelerated up as it exits, boosting its extraction power. The resulting improvement in aerodynamic performance is underscored by a slash on the front bumper that flows into the design of the flanks, adding visual harmony to the side view of the car. Thus, the signature Portofino side scallop finds its visual counterpart on the Ferrari Portofino M’s front bumper, which has been sculpted to accentuate the car’s dynamic profile.

At the rear, the new exhaust system has allowed the removal of the silencer assembly, making the Ferrari Portofino M’s tail more compact. The result is that the rear bumpers are now more streamlined and sculptural. Visually, their forms are lighter too and their styling more in harmony with the front bumpers, creating a much more coherent overall aesthetic.

With the top down the Portofino M reveals its stylish GT soul and occupants will appreciate how compact and organic the whole car feels. There is exceptional design coherency in the development of the cabin, in fact. The Styling Centre team began by pinpointing certain specific prerequisites essential to the success of the design, the foremost of these being formal and functional coherency between the car’s exterior and its interior, weight reduction and more occupant space.

The seats are the product of a special research project and have an innovative magnesium structure. Different density padding and an ultra-compact seatback profile have freed up space for rear occupants too.

The Ferrari Portofino M’s HMI (Human-Machine Interface) centres on a digital cluster with dual TFT displays arranged around the analogue rev counter in a generous circular, anti-glare binnacle. Located on exactly the same axis as the multifunctional steering wheel, this cluster allows the driver to interact more easily and intuitively, both visually and physically, with the car by delivering optimal driving feedback.

The infotainment system functions are controlled via the touchscreen handily located at the centre of the dash within easy reach of both driver and passenger. Designed to be as quick and accessible as possible in terms of both use and content, it includes a full HD multi-touch capacitive screen with Split View to allow different types of content to be viewed simultaneously. Both Apple Car Play and Android Auto are also available.

Ferrari’s unparalleled quality standards and increasing focus on customer service underpin the extended seven-year maintenance programme offered with the Ferrari Portofino M. Available across the entire range, the latter covers all regular maintenance for the first seven years of the car’s life. 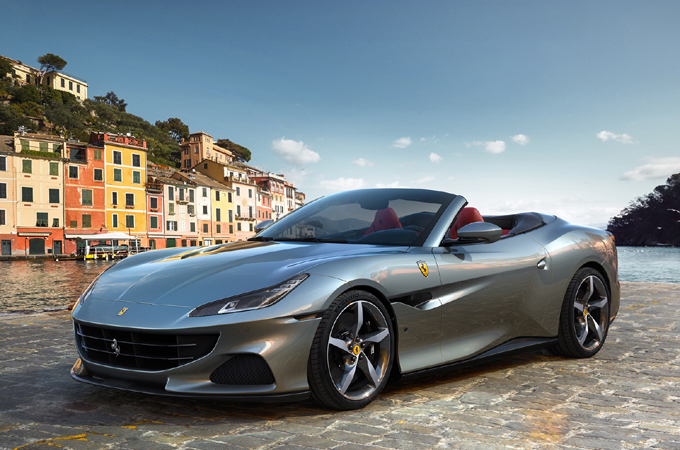 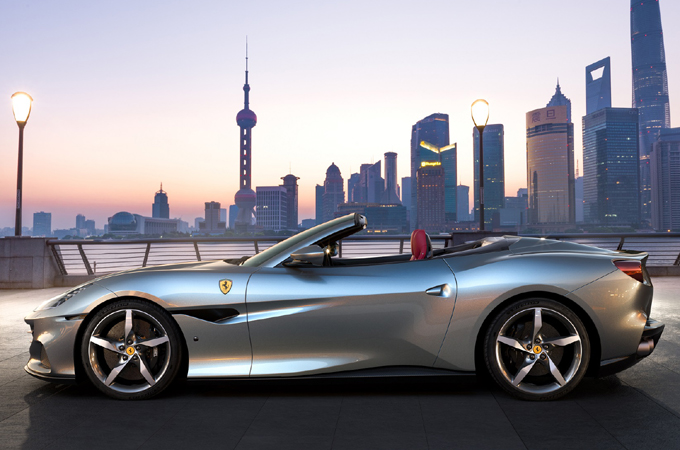 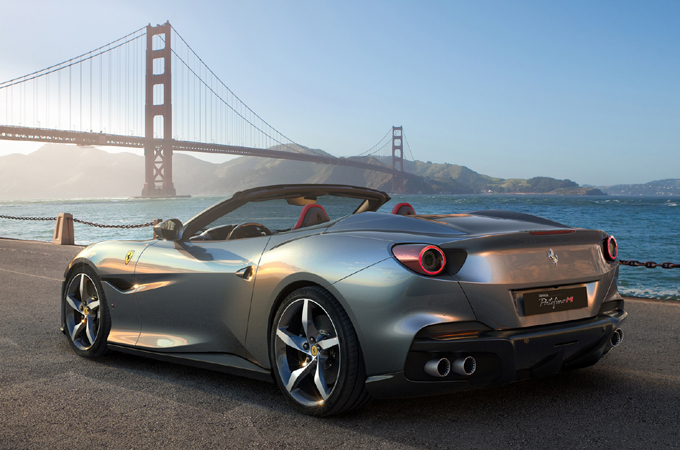 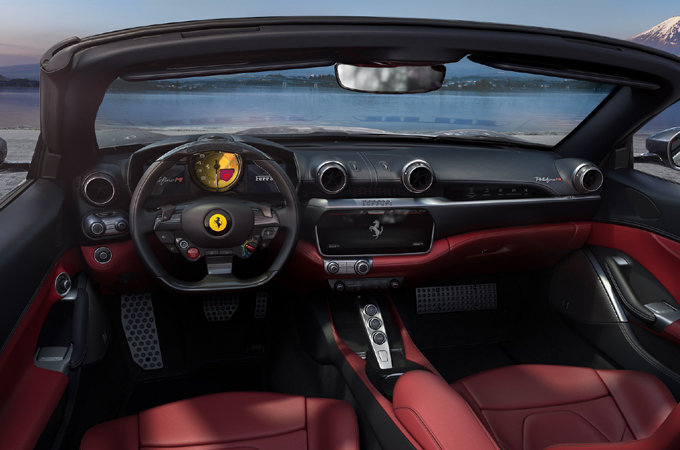