At the 2014 Paris Motor Show in October, Ferrari put the spotlight on its 458 Speciale A, a new limited edition special series.

The A stands for Aperta, which means ‘open’ in Italia, as the Italian manufacturer explains.

The new open-top car celebrates the success of the various versions of the 458, a model that has collected an array of international awards and track victories, not least a double WEC title and category wins in classic endurance races, such as the 24 Hours of Le Mans, the 24 Hours of Daytona and the 12 Hours of Sebring.

Limited to just 499 cars, the 458 Speciale A is the most powerful spider in the Prancing Horse’s history, effortlessly marrying extreme performance with the sublime pleasure of droptop driving. Its aluminium retractable hard top, which takes a mere 14 seconds to deploy or retract, helps reduce the weight difference with the Speciale coupé to just 50 kg.

The 458 Speciale A sports the most powerful naturally aspirated road-going V8 engine ever built by Ferrari. It punches out a massive 605 cv and 540 Nm of torque at 6,000 rpm yet only generates 275 g/km of carbon dioxide (CO2) emissions. The three international Best Performance Engine awards the V8 has won are acknowledged on a special plaque in the cockpit.

The car sprints from 0-100 kmph in just 3.0 seconds and has a Fiorano lap time of 1.23.5. These superb results are thanks in great part to its front and rear active aerodynamics, the rigidity of a chassis that incorporates 10 aluminium alloys, and side slip angle control (SSC) which guarantees unparalleled sporty driving in all conditions, underscored by the exhilarating signature Ferrari soundtrack.

The 458 Speciale A’s sculpted forms are absolutely performance-oriented. Most of the bodywork panels have been redesigned without modifying either the passenger cell or the signature design features of the car. The composite bumpers have been redesigned and the front bonnet now features two deep air outlets to channel away the air exiting the radiator.

The 458 Speciale A is being premiered in an unusual yellow triple-layer livery with a Nart Blu and Avus white centre stripe.  Its new forged five-spoke wheels are available in three colours: Oro, Grigio Corsa and diamond-finish matt black.

The cabin has a distinctive racing-inspired atmosphere with the focus on eliminating all superfluous weight. This was achieved by adopting lightweight yet exclusive materials including Alcantara and carbon-fibre crafted with Ferrari’s signature artisanal sophistication.

The newly-designed seats have Sabelt carbon-fibre shells and boast excellent side bolstering.  The shoulder-rests are trimmed in Alcantara for improved grip while seated, and the backrests and seat itself are padded with a breathable 3D fabric to guarantee excellent air circulation and comfort.

Ferrari is calling the Aperta “the most aerodynamically efficient Ferrari spider ever”. 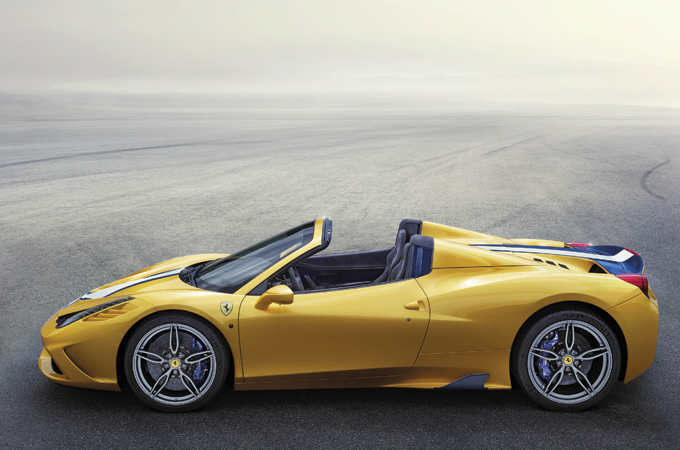 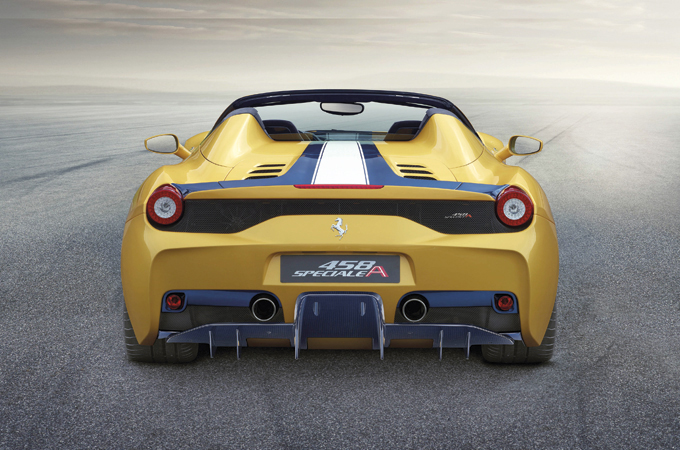 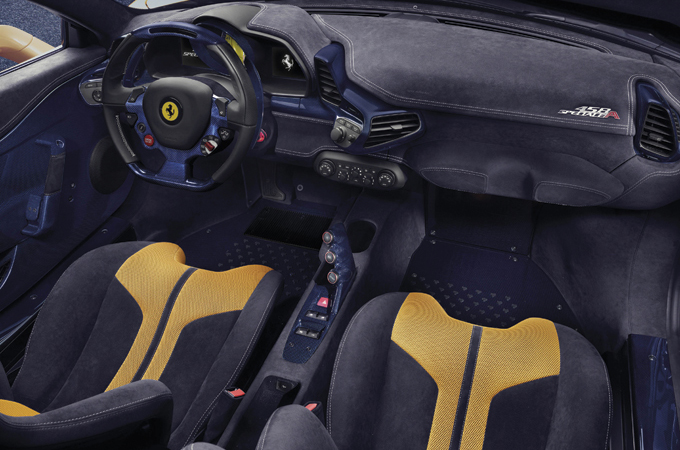 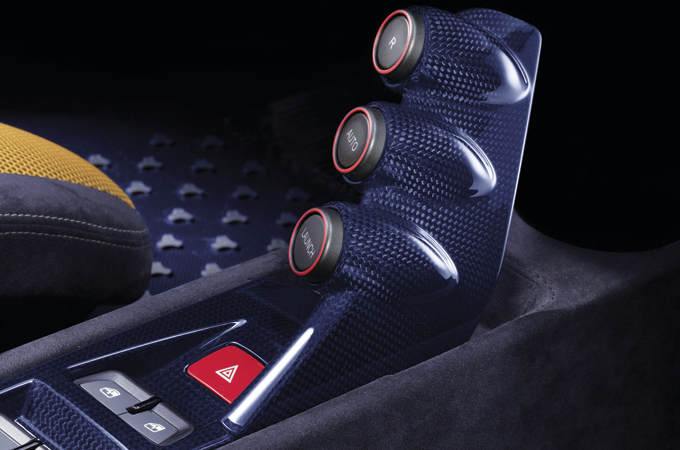