BIDEC will showcase the latest defence equipment, technology and systems, as well as live demos and numerous networking opportunities. There’s plenty for visitors to see too…
Defence and home land security is generally a domain for experts in the field. However, the upcoming Bahrain International Defence Exhibition and Conference (BIDEC), while catering to the industry specialists, will also give the public a chance to understand what goes behind keeping everyone safe.

BIDEC will present the latest equipment, technology and systems, as well as live demos and numerous networking opportunities and with over 200 exhibitors, there is plenty for visitors to see and awe at. The biennial event will be held at the Bahrain International Exhibition and Convention Centre, Sanabis, from October 28 to 30.

Organised under the patronage of His Majesty King Hamad bin Isa Al Khalifa, HH Brigadier Shaikh Nasser bin Hamad Al Khalifa, Commander of Bahrain Royal Guard and Chairman of BIDEC 2019, has been the force behind the success of the event.

The show continues to be fully supported by the Bahrain Defence Force (BDF) and it also has continued backing from other authorities, including specially selected committees within the BDF, Naval Force, Air Force, Royal Guard, National Guard and other government divisions. This support allows the event to grow and ensures a high level of attendance from the host nation, says Thomas Gaunt, Managing Director of Clarion Events Middle East, the organiser of the show, in an interview with Arabian Knight.

“The official support from the BDF and other authorities ensures a high level of attendance from the host nation. The strong governmental support also means that other Middle Eastern countries with close relationships with Bahrain are expected to send senior military representatives to the event. In 2017, there were huge delegations that attended from the UAE and Saudi Arabia, two of Bahrain’s closest allies,” he says.

The event is expected to welcome over 200 exhibiting companies with approximately 35 per cent from the Middle East. This year will see more exhibitors and visitors from more countries than in 2017 with over 50 new exhibitors confirmed and over 10,000 visitors expected. The show floor will feature nine country pavilions – France, India, Pakistan, Russia, Saudi Arabia, Turkey, UAE, UK and US.

About 20 exhibitors from Bahrain are taking part in the show including BDF, Interior Ministry, Asry, Building Defence Systems and Sniper Trading, among others. The largest delegation is from the US, featuring 36 companies, including Lockheed Martin, Airborne Systems and Bell.

“Our goal for BIDEC 2019 was to increase the exhibition space to fill both halls of the Bahrain International Exhibition and Convention Centre,” says Gaunt.

“The main new feature of the show this year is the change in the topic of the conference. In 2017, the focus was on alliances and coalitions, something which was very relevant for the region at the time. This year, the focus will be on military technology, and how the development of technology is reshaping conflicts in the Middle East. There are some superb international speakers lined up,” elaborates Gaunt.

On what makes Bahrain an ideal location for such a prestigious show, Gaunt explains: “With more than 7,000 years of civilisation and a key strategic location in the Middle East, linking East with West, Bahrain has been a hub within the region for trade and travel for many years. Bahrain has recently shown great support for international navies and the Bahrain Defence Force is currently supporting coalition forces overseas. The country has a strong history of education and training working with international partners, which will only strengthen in the years to come.”

Prior to the exhibition, the organising team has visited various international defence events around the world. “Attending such events helps to attract new countries to attend and exhibit, growing the number of countries represented year on year. The BIDEC team attends numerous defence and security events with an official delegation from the Bahrain Defence Force, meaning potential exhibitors can concurrently hear about Bahrain’s current requirements as well as learn about the benefits the event can bring to their company. The team’s presence at other defence events also ensures strong relationships with current exhibitors who exhibit across other events,” says Gaunt.

Speaking on the show’s importance to defence decision-makers in the region, Gaunt says that the VIP Delegation Programme of the show is structured to ensure exhibitors meet the right people at the right time, meaning a growth in attendance from both the military and industry sides this year. “Decision-makers are given a schedule tailored to their interests, ensuring they engage with the right exhibitors and take part in the most suitable meetings,” he adds.

BIDEC provides a platform for local defence companies to engage with the thousands of international visitors, including high-level decision makers from militaries around the world, giving them invaluable face time they wouldn’t have otherwise, continues Gaunt.

“In the previous edition, we welcomed 61 official delegations from 26 countries such as Saudi Arabia, Kuwait, UAE, Oman, Malaysia, Egypt, and others. The VIP Programme at BIDEC is designed to maximise the time the delegations have, and ensure all exhibitors meet as many VIPs as possible,” he says.

The off-site activities include:

•  Parachute demonstrations – Companies showcase their latest parachute systems in a pioneering display with the BDF. Visitors with the appropriate military free-fall licence will be given the opportunity to trial these products;

•  Shooting demonstrations – Military personnel have the chance to test new firearms and ammunition on an indoor and outdoor shooting range;

•  Sniper and night-vision demonstrations – Military personnel have the chance to test new night-vision equipment, firearms and ammunition on a long-range shooting range in the BDF grounds;

•  Warship Display – VIPs and visitors will have the opportunity to examine today’s most technologically advanced warships and naval fleet at Mina Salman Port. 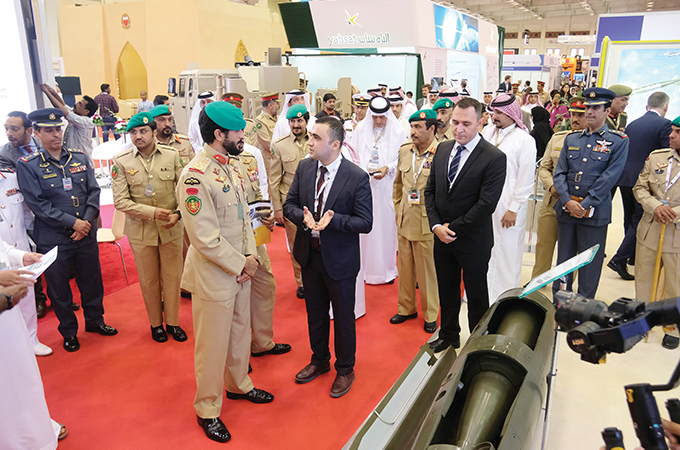 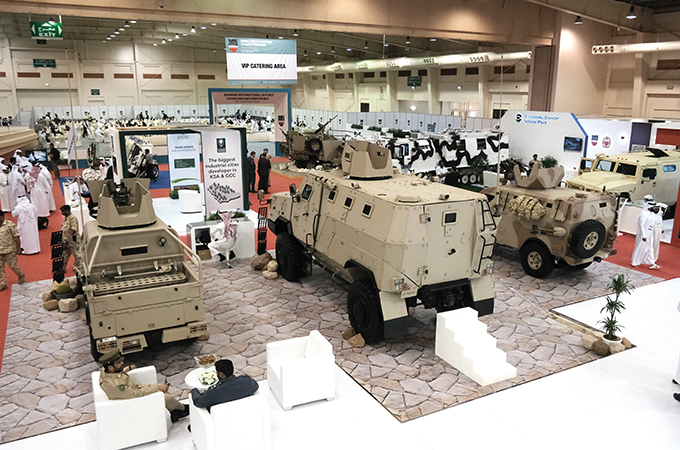 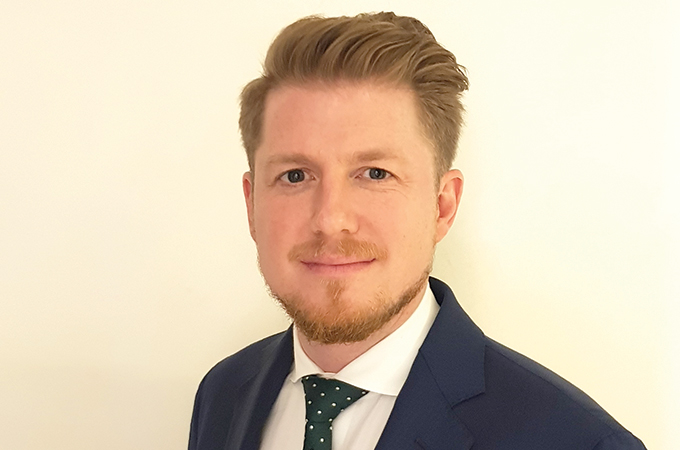 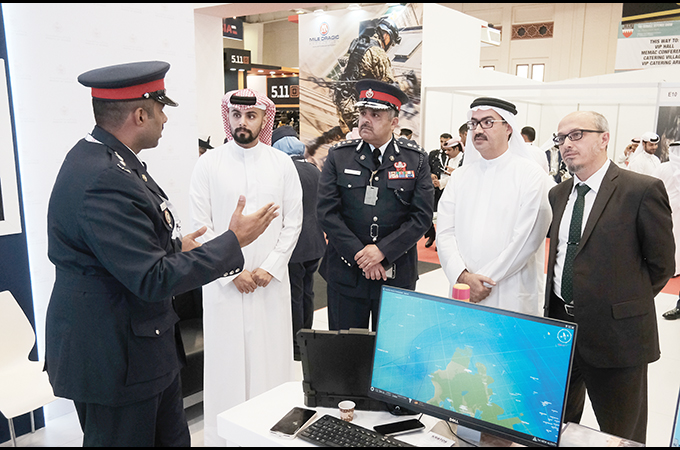 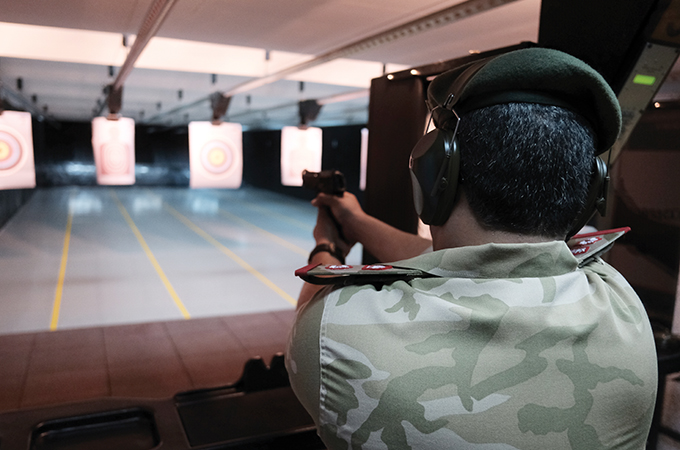 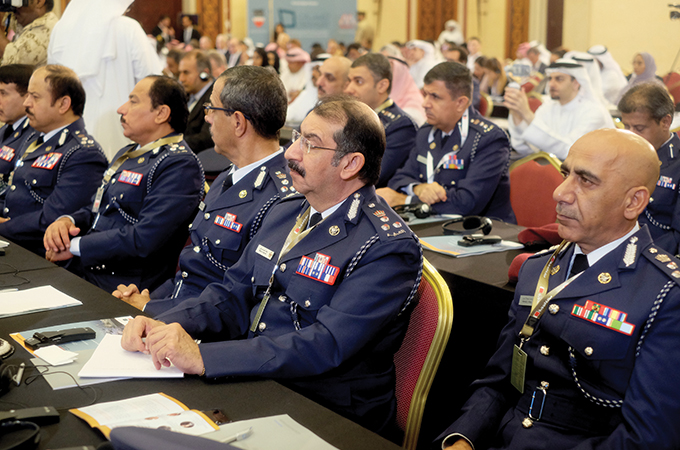 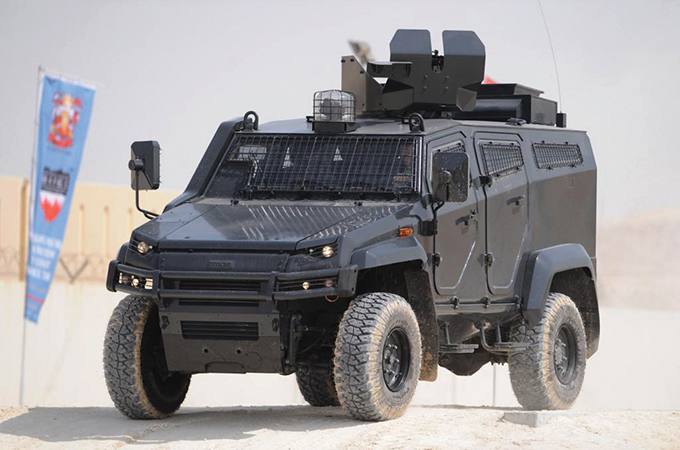 "
This year will see more exhibitors and visitors from more countries than 2017 with over 50 new exhibitors confirmed and over 10,000 visitors expected