On September 25, AlMansoori will be launched to the International Space Station, making him the first Emirati in space. The project is being managed and executed by the Mohammed Bin Rashid Space Centre (MBRSC). MBRSC is also responsible for the development of various projects including the UAE Astronaut Programme and the development of the Mars 2117 vision to build a human colony on Mars.

After undergoing rigorous training to prepare for this mission, AlMansoori was selected from thousands of applicants to become the UAE's first astronaut in space, taking a leap into the future, whilst writing a new chapter in the history of the UAE. AlMansoori will be accompanied by his backup Emirati astronaut Sultan Al Neyadi.

“This unique pen was made to celebrate the historic feat and is a symbolic representation of this mission and the forward-thinking vision of the leaders of this country,” said Charles Nahhas, Montegrappa’s Middle East Distributor.

He continued: “We are pleased to have the opportunity to present this unique writing instrument on this momentous occasion.”

Montegrappa was founded in 1912 and operates, to this day, from the same historic building at the foot of the Monte Grappa mountain in North-East Italy where Italians heroically defended their country during two world wars. Today, Montegrappa continues a long tradition of craftsmanship in producing exquisite hand-made masterpieces that celebrate mankind's mastery of the written word. 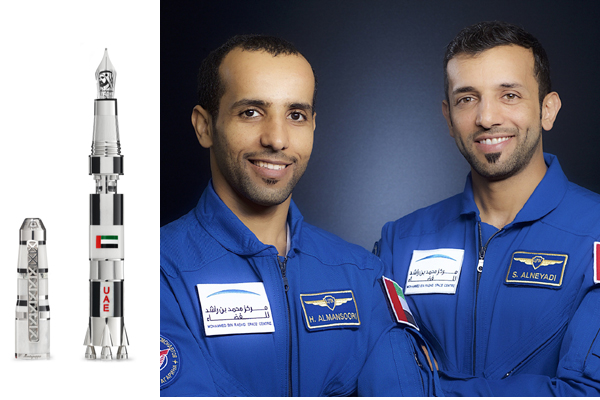