Phillips, a leading auction house for art, design and watches, in association with Bacs & Russo, the global market leader in collectors’ watches, has unveiled highlights from "Double Signed: A Celebration of the Finest Partnerships Between Manufacturers and Retailers".

The auction, to be held on November 9 at the Hôtel La Réserve in Geneva, will feature more than 60 timepieces of exceptional quality, including vintage and modern collectors’ watches sold by the most prestigious retailers around the world, from Tiffany & Co, Bailey Banks & Biddle, Serpico Y Laino, and Freccero in the Americas, to Cortina in Asia, and Beyer, Gübelin and Gobbi in Europe, just to name a few.

More than an auction, this historic event will reunite what many seasoned collectors consider to be absolute grails of their collecting field, in many cases bringing them back “home” to Switzerland for the first time since they were made.

Alex Ghotbi, Head of Watches, Continental Europe and the Middle East and Virginie Liatard-Roessli, Specialist, Head of Sale for Double Signed, jointly said: “Preparing the Double Signed watch auction took us on an incredibly beautiful journey across the last century of watchmaking, as we travelled through time and space, from one continent to another, via exotic destinations where the world’s most important watches once travelled towards as well. From an aesthetic point of view these watches appeal to watch lovers thanks to their additional signature and extra rarity. With them we are able to celebrate the finest partnerships between watch manufacturers and prestigious retailers who were extremely proud to associate their names to the finest timepieces available.”

Phillips will present some of the rarest pieces sold by historically important European retailers in Italy, Germany, Switzerland and the United Kingdom, including:

* An extremely fine, highly important, and possibly unique pink gold Patek Philippe perpetual calendar chronograph Reference 2499, made in 1971 and retailed by Trucchi, in Naples, Italy. The iconic reference 2499 was the successor of reference 1518, the world’s first perpetual calendar wristwatch made in series. From 1951 until 1985, a total of 349 pieces were made. Furthermore, it is the only known pink gold example featuring the prestigious and extremely rare “Trucchi” signature.

* A very fine and rare yellow gold Patek Philippe perpetual calendar chronograph Reference 2499/100 retailed in Switzerland by Gübelin, with original certificate. The present version is not only fresh to the market but one of only four examples in yellow gold (regardless of series) to bear the prestigious Gübelin signature on the dial.

* The only publicly known pink gold Patek Philippe chronograph reference 533 with pink dial signed by Italian retailer Hausmann. Reference 533 was in production from 1937 to 1957, and was made in very restricted numbers. It is estimated that the total production was about 350 pieces, of which exceedingly small numbers were cased in pink gold.

* An extremely attractive and rare pink gold Audemars Piguet chronograph wristwatch, made in 1939 retailed by Gobbi-Milan. Current estimates indicate that little more than 300 Audemars Piguet chronographs were produced overall between 1930 and 1962. According to the brand’s archives only 19 models like the present one were ever made, and only two were sold to Gobbi in Milan, Italy.

* An important, stately, large yellow gold automatic Patek Philippe perpetual calendar Reference 3450 with moonphases, retailed in Switzerland by Beyer. An evolution of reference 3448 (first launched in 1962), it was released in 1981 and remained in production for a much shorter time than its sibling: only 5 years - until 1985. Such a short run dictated a very scarce output, with a total of 244 pieces made.

* A unique and important yellow gold minute repeating Patek Philippe Reference 3652, and retailed by Golay Fils & Stahl. The present reference 3625 is unique in many ways, not only is it the only known example of this reference, leading us to believe it was made upon special order, but it was manufactured in 1985, years after Patek Philippe has ceased serial production of minute repeater wristwatches.

FROM THE AMERICAS & THE CARRIBEAN

Phillips will offer a selection of the finest watches sold in North and South America, during the 20th century boom of Swiss watch exports, including:

* A fine, rare, important and attractive 14K yellow gold Rolex Cosmograph Daytona Reference 6241 with "John Player Special Paul Newman" dial, made circa 1969 and retailed by New York based Tiffany & Co. Only a dozen of yellow gold reference 6241s with "John Player Special" dials are known today, and to discover a second example with the retailer's signature is nothing short of spectacular.

* An incredibly attractive and rare pink gold chronograph Reference 1463 with pink dial, made in 1952 and retailed by Serpico y Laino. Manufactured from approximately 1940 to 1969, the reference 1463 is one of the most popular vintage chronograph wristwatches on the market today. According to research, only four examples of pink gold references 1463 fitted with pink dials retailed by Serpico y Laino have appeared in public to date.

*A rare and attractive pink gold Patek Philippe Reference 565 with pink dial and bracelet, made in 1947 and retailed by Le Palais Royal in Havana, Cuba. This reference 565 is one of the most impressive examples of its kind to ever appear on the market.

* An elegant and beautiful pink gold Patek Philippe chronograph Reference 1579 with pink dial and pulsometer scale, made in 1946 and retailed by Freccero, in Montevideo, Uruguay.

* The only publicly known yellow gold Rolex GMT-Master Reference 6542, made in 1958 and retailed by Serpico y Laino. The present watch is an absolutely breath-taking and exceptional GMT-Master.

Finally, Phillips will present a selection of modern watches that are notoriously difficult to obtain. Sold by today’s biggest retailers, these models command long waiting lists or are simply not available to the general public until they are offered at auction.

* A unique platinum F.P. Journe Octa Calendrier annual calendar with retrograde date made for John Asprey, and retailed in the United Kingdom by William & Son.

Watch collectors can meet the Phillips team and admire the exceptionally fine and rare selection made for Double Signed. "We are confident our selection of watches will continue to fuel the remarkable passion for watches that collectors have, and look forward to welcoming them to our previews later this month in Taipei (October 1 and 2); New York (Oct 18-21); London (Oct 25-28); Hong Kong (Oct 28-30). The Geneva preview and auction will be from November 7 to 10. 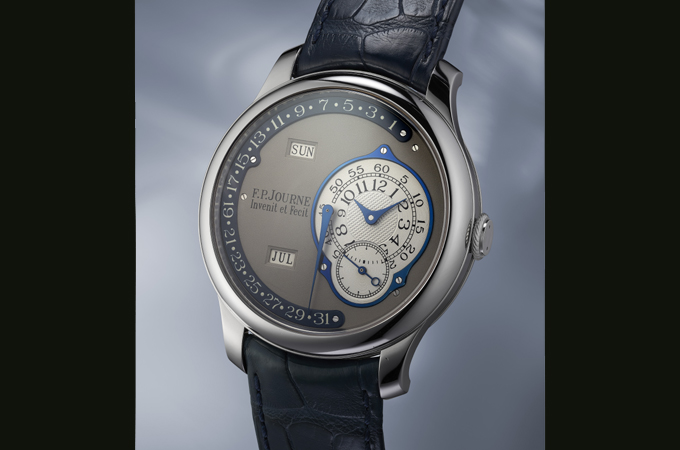 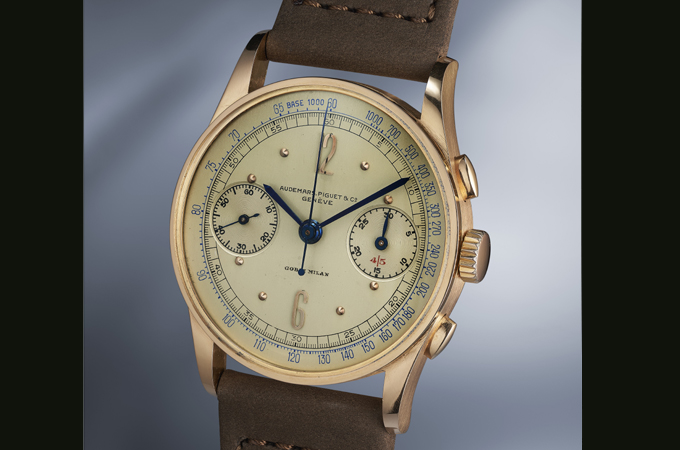 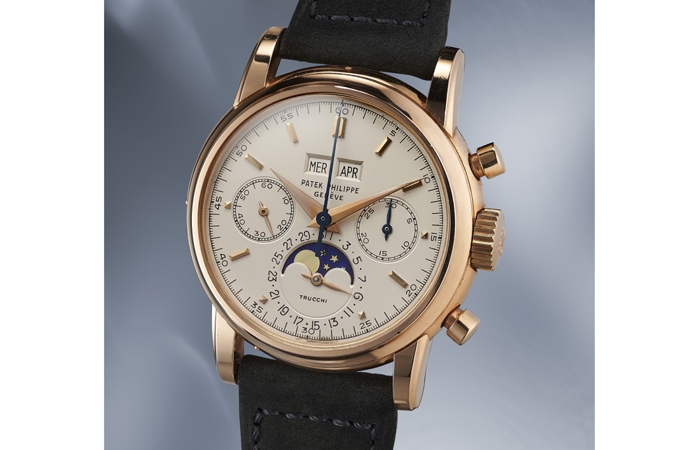 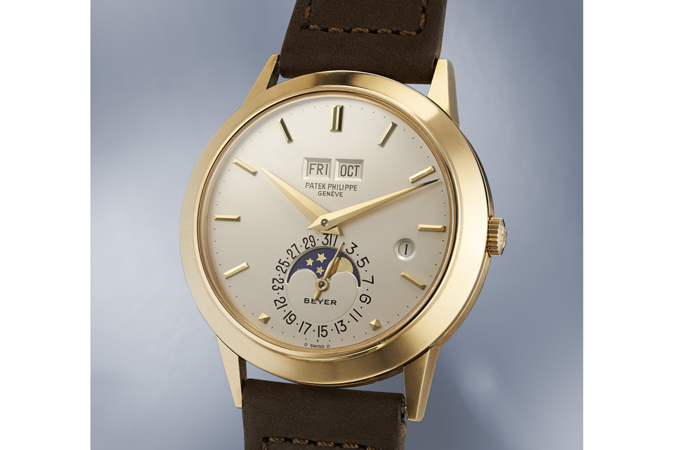 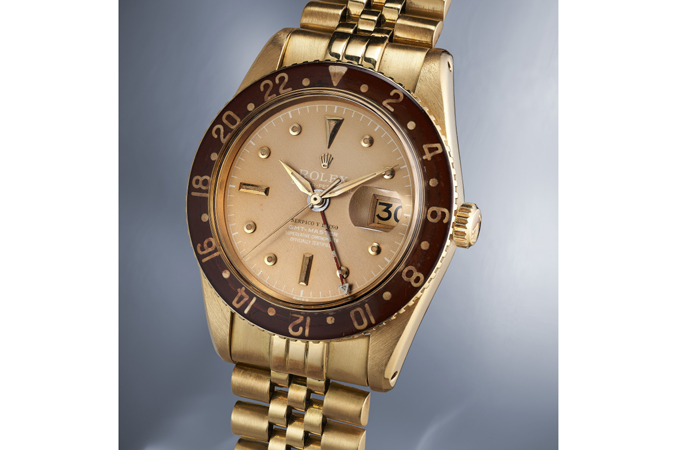