The Louvre Abu Dhabi will feature some 300 paintings and sculptures from 13 of France’s most renowned collections spanning from pre-Bronze Age to pop art, says Abu Dhabi Tourism and Culture Authority (TCA Abu Dhabi), the developer behind the museum.

Here is the first of a two-part preview of some of the most remarkable items loaned from the French museums that will go on display at the museum, which will open in December next year.

The Birth of Civilisations section will offer the viewing of contrasted representations from emblematic figures who reigned over the earliest kingdoms and empires. Gudea, who ruled over the Mesopotamian kingdom of Lagash, was famously pious and built many temples. He is shown standing, enveloped in a fringed mantle and wearing the traditional royal turban, with his hands clasped to indicate his devoutness. The quality of the sculpture is indicative of the high level reached by Mesopotamian art tradition at the end of the third millennium BCE, when the representation of the human figure in sculpture was already long-established.

These two deep vessels resting on square bases were discovered in China in 1929. At the end of the Western Zhou dynasty, gui vessels were usually cast as single pieces with wide parallel epipedic pedestals. They are flanked by two handles in the shape of a dragon swallowing a bird with only the base of the wings still visible. From recognisable animal decorations inherited from the art of Shang period and still common at the beginning of the Zhou dynasty, the 9th century saw the emergence of a new vocabulary of geometric patterns. Nearly flat hooks only offer a faint echo of the original animal shape. Inside each receptacle, 111 characters are inscribed and explain the history of the cast. Thus we know that the Ling family had the set produced using a royal gift around 1000 BCE. Vases would become historical monuments made on the occasion of major events, which history is recorded on such thin bronze walls.

No museum dealing with the great civilisations of antiquity would be complete without a monumental effigy of a pharaoh. This statue will be one of the high points in the tour of Louvre Abu Dhabi. It will complement the museum’s acquisitions in Ancient Egyptian art, which at the moment have mainly focused on the topic of funeral rites. The monumental statue of Ramesses II will be set in counterpoint to a figure of the Mesopotamian prince Gudea, the two of them offering contrasting images of the splendour of the royal person. Ramesses II is shown in the conventional posture of the pharaohs, seated on a cubical throne, with his hands placed flat on his thighs, wearing the nemes headcloth with a rearing cobra on the brow.

This breastplate was one of seven similar pieces that were found by chance. They had been stored together intentionally, no doubt for ritual purposes. These seven breastplates are decorated in a similar yet exceptionally sumptuous manner that has no real equivalent up to now in Europe. Small lines of studs run in areas marked off by small pearls, in parallel lines and curves. The rich decorations adorning this defensive armour indicates that it was ceremonial rather than for use in war. This find – the only one of its kind – is a superb testimonial of the talented metal workers and armourers of the Bronze Age.

Several examples of monumental sculpture will be joining Louvre Abu Dhabi’s substantial collection of Greek art. The larger-than-life-sized statue known as the Mattei Athena will provide a majestic illustration of the Classical period in statuary and complete the series of acquisitions of the Louvre Abu Dhabi begun in 2011 with an archaic female Sphinx. This figure of Athena is sometimes called the Pacific Athena on account of the goddess’ gentle expression. The position of her hands and the fact that heraegis is simply worn as a sash are the only reminder that she is the goddess of Wisdom as well as of War.

Leonardo da Vinci is probably one of the most famous and popular artists in the history of art. Louvre Abu Dhabi will have the opportunity to display one of his most attractive works – a portrait of an elegantly dressed young woman painted when the artist was based in Milan. Thematically, this picture will illustrate Renaissance artist’s quest for naturalism with the aid of the new technique of oil painting. It will echo Louvre Abu Dhabi’s own Bellini’s Madonna and Child, also painted in oil on wood, another head-and-shoulders portrait in which the figure is depicted behind a parapet and against a dark background.

In the wing devoted to the medieval period, Louvre Abu Dhabi reflects on how contacts between civilisations has enriched their artistic traditions. This stunning reliquary from the cathedral of Moûtier-en-Tarentaise, one of the treasures of the French National Museum for Middle Ages, will highlight exchanges between cultures around the Mediterranean rim. It was made by reusing plates of rock crystal from a secular casket made in Fatimid Egypt in the 10th century, and then adding a silver-gilt mount typical of northern French goldwork between 1200 and 1210. This piece shows how the circulation and reuse of Islamic objects encouraged the spread of Oriental motifs through Europe at the same time as placing them in a totally Christian context of Western Europe.

This is one of the masterpieces of the Islamic Art Department of the Musée du Louvre. Used as a fountain spout, it was found at Monzón in the Spanish province of Palencia. It is one of the few metal items of this kind preserved dating back to the Islamic kingdoms of Western Europe. The very fine floral Kufic inscription engraved in the bronze dates it from the 12th or 13th century. It wishes the owner “Baraka kamila/Ni’ma shamila” (Perfect blessing, Complete happiness). This object displays striking similarities with lion-shaped aquamaniles in 13th-century German goldwork and brassware, which many consider to have been directly influenced by the zoomorphic vessels produced in the Andalusian workshops.

This cobalt-glazed figure of a court lady exemplifies a style in vogue in China during the Tang dynasty (618-907) at its zenith. The court lady ample figure is draped in a long tunic whose dark-blue colour was made using cobalt-blue colour imported from Iran. Her wide face, full cheeks and prettily arched laurel-leaf eyebrows counterbalance her voluminous hairstyle. As a testimony of this period characterised by the international expansion of imperial China, this rare work fits perfectly with the museum’s curatorial programme and completes ideally the group of Tang masterpieces acquired by Louvre Abu Dhabi.

This rare salt cellar comes from the Benin Empire, located to the southwest of today’s Nigeria and dates back to the 16th century. At the time, many royal workshops worked with elephant ivory. Some objects were produced for the local elite while others, like this one, were manufactured for export and brought back by the Portuguese for a rich European clientele. The lower part of this salt cellar depicts four bearded Portuguese soldiers. Two of them holding a lance and a sword are wearing European garments, a hat with a feather, and a cross pendant on their chest. The other two figures are wearing a helmet and carrying a small shield. On the top, the image of a caravel with a sailor is an illustration of the picturesque and African look on new realities.

This anthropomorphic mask sculpted from black stone is representative of the Teotihuacan culture in Mexico. The mask was originally encrusted with shells and fragments of obsidian to represent the pupils and teeth, making it both expressive and realistic. This piece embodies a great Mesoamerican civilisation that grew up at around the same time as Han China and the Roman Empire. It was formerly part of the collection of the writer André Breton.

The softness and new sensuality with which Titian depicted his human subjects represent a crucial turning-point in the history of European art. Like the Da Vinci portrait, this painting, loaned by Musée du Louvre, will be located in a section focusing on the new naturalism in Renaissance painting. 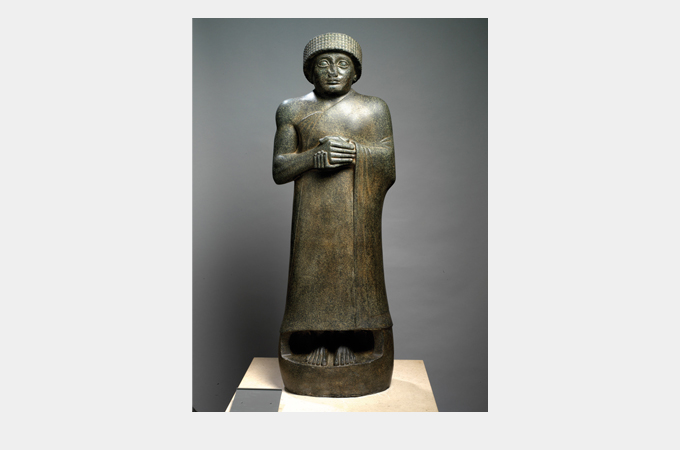 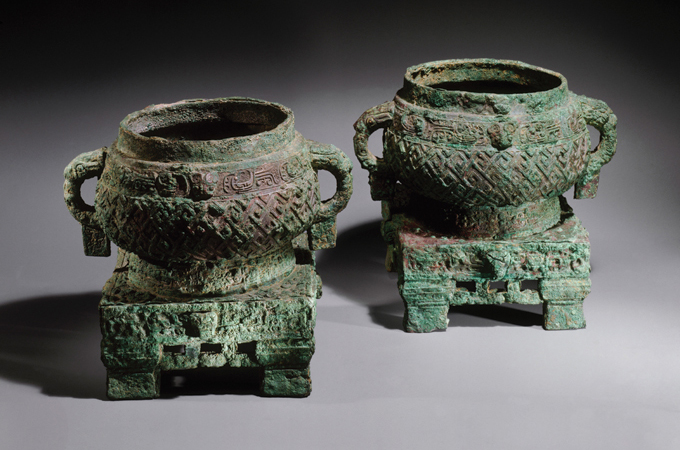 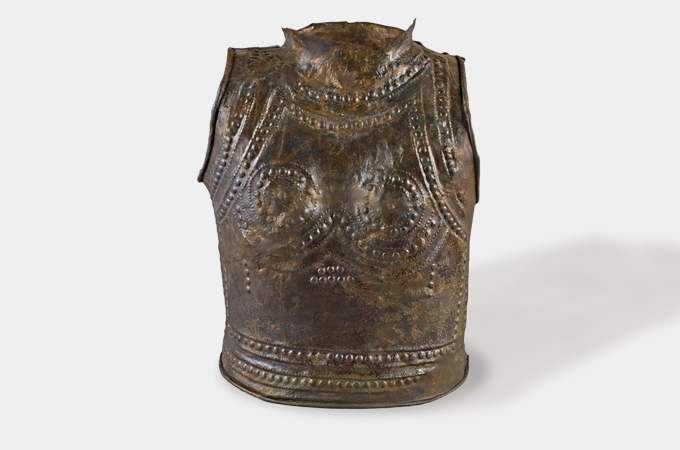 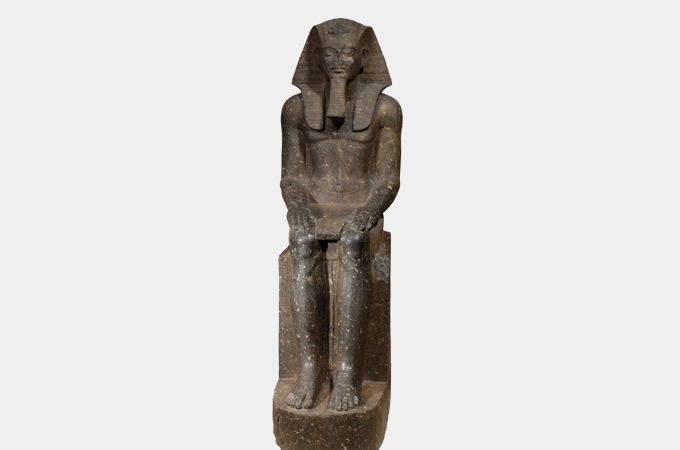 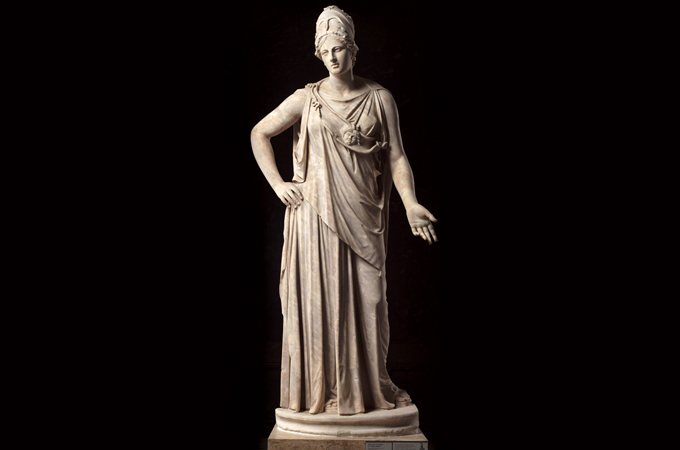 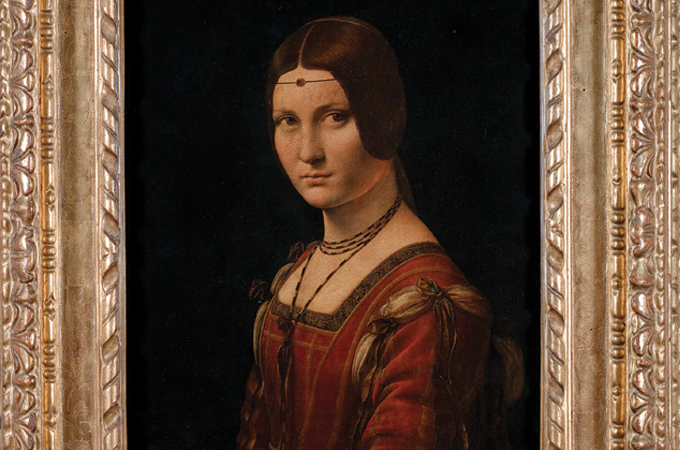 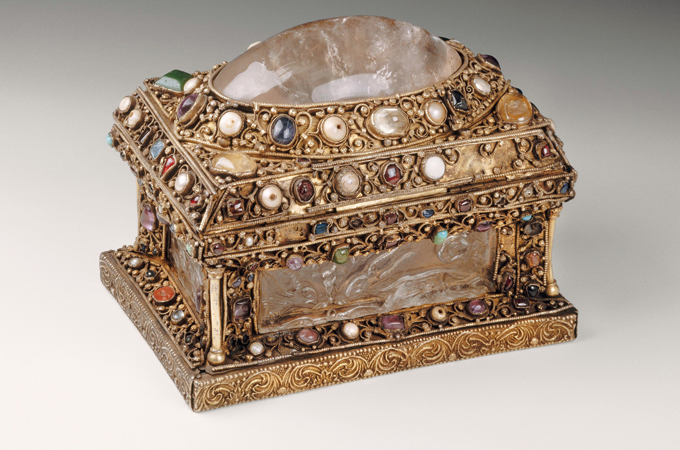 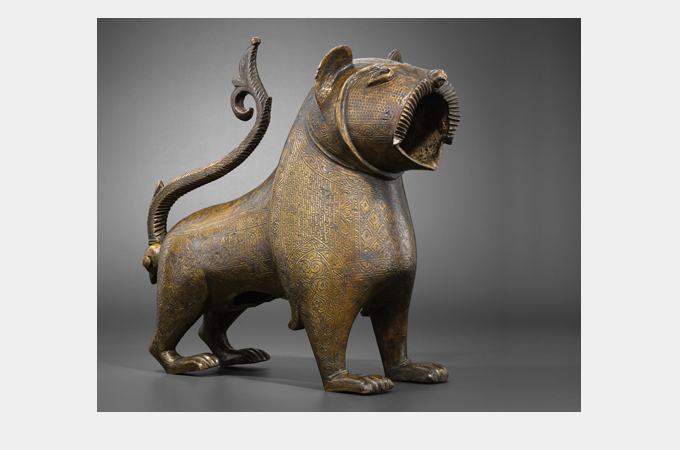 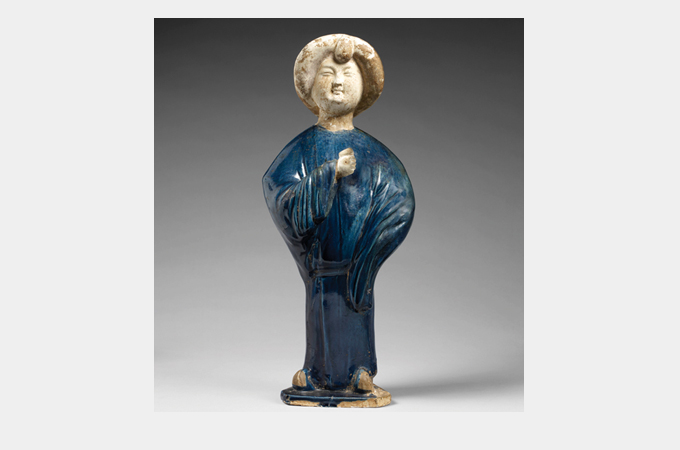 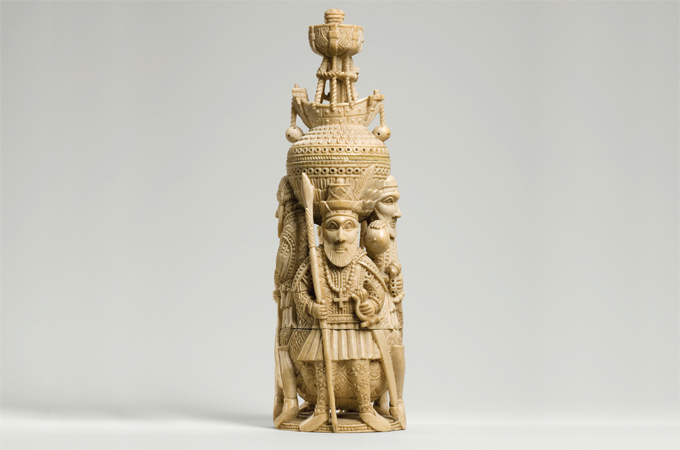 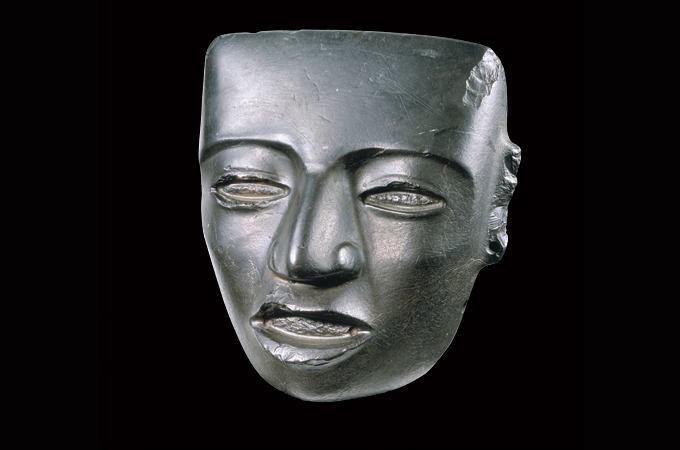 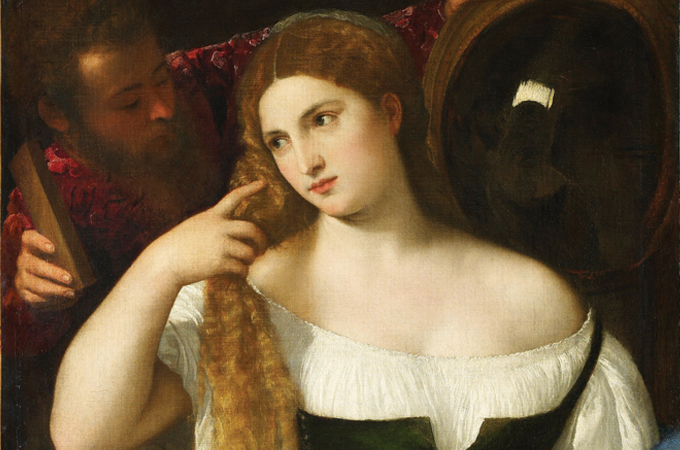