When Daniel Nicholas Thévenon, a French wine merchant, arrived in England to escape his creditors and set up Café Royal in 1865, little did he know that his venture would one day become an iconic rendezvous for the rich and famous.

Today, this legend lives on, thanks to the efforts of The Set hotels, which has not only reincarnated the central London landmark but expanded it to cover three buildings. Leased from the Crown Estate in 2008, the hotel was closed for extensive renovation that was carried out under the guidance of David Chipperfield Architects before reopening in late 2012.

Following the launch, it opened its Akasha Holistic Wellbeing Centre last December; and September 2014 saw the launch of The Domino, a fine-dining venue. And now, with the opening in early October of The Club – a haven for members within beautifully appointed entertaining and dining spaces that blend English and French design – Hotel Café Royal proclaims its return to London’s social scene.

Exclusivity, luxury and privacy are the watchwords at this hotel, which continues its tradition of attracting the elite while respecting their desire for privacy, says Anthony Lee, the hotel’s General Manager.

He says the property aims to provide a total package by embodying the essence of London: the architectural grandeur that continues to attract millions from around world to the UK’s capital city; the gastronomic delights including a chance to sample British afternoon tea; the vibrancy of the social scene; the pub culture that is so inherently British; and a spa for those who hanker for serenity while being in the midst of the metropolis.

With Mayfair to the west and Soho to the east, Hotel Café Royal is perfectly positioned within walking distance of London’s finest shopping streets such as Bond Street, tourist attractions, and world-famous theatres and art galleries.

For over 140 years, Hotel Café Royal has welcomed a variety of guests, from royalty to rock stars, bohemians to barons and serving as a rendezvous for creative minds – right from Virginia Woolf to Rudyard Kipling and from Louis Armstrong to Muhammad Ali.

Café Royal is a hotel of The Set, a “new breed on the block” – as Lee describes it – which takes on landmark buildings and transforms them into lifestyle palaces that offer superlative hospitality. Hotel Café Royal is the second hotel under its wing, after the Conservatorium Hotel in Amsterdam, and The Set is now readying yet another landmark, the Hotel Lutetia in Paris, France, for an opening next year.

To give form to the vision of The Set, the architects and designers have created spaces that are contemporary in conception, whilst evocative of the style and glamour of the past.

The transformation has created rooms that virtually eliminate any noise from outside. Because of the high standards of insulation, the premises is probably “the heaviest hotel per sq m,” quips Lee, who exudes the charm of Father Christmas.

The hotel features 160 contemporary guestrooms, including 49 suites and six signature suites and a selection of restaurants and bars that are overseen by the passionate Executive Chef Andrew Turner. The facelift to the facility has seen the careful use of rusticated Portland Stone, which is emblematic of Regent Street.

Crowning the hotel under a copper domed rotunda is the Dome Suite, which can transform from a penthouse retreat to a party hall exuding vibrancy within its circular space and terraces that overlook the statue of Eros at Piccadilly Circus. Other signature suites which come with a butler service include the classically gilded Empire suite – the hotel’s largest at 212 sq m which itself can be linked up with the en-suite Regent suite – Marquis, Tudor, Celestine and Club.

They come with complimentary wi-fi and access to the Akasha Holistic Wellbeing Centre.

Hotel Café Royal offers a selection of dining and entertainment venues. Perhaps the most stunning is the ornate dining space that was once frequented by English playwright Oscar Wilde, and now named after him. Originally established in 1865 as Grill Room, the Oscar Wilde Bar has been through extensive restoration to revive its former resplendent Louis XVI décor and detailing, including its gold leafing, marble busts, and fresco paintings on the ceilings. The place to go to sample British high tea, the space after 6 pm serves cocktails and a light menu of British dishes, complemented by live entertainment on select evenings.

At the heart of the hotel, the Ten Room is a British informal dining all-day venue with a French twist. And overlooking this space that offers 60 covers is The Club, the latest facility to be opened at the hotel.

To sample the pub culture, Café Royal boasts yet another historic venue: The Green Bar with the original entrance dating back to 1865 while The Café revives the European tradition of café culture and proudly sports black-and-white prints of the hotel’s well-known patrons which include Winston Churchill, George Bernard Shaw, Elizabeth Taylor, and Mick Jagger.

While The Café has its own pastry chef – Andrew Bas – the gastronomic delights from the hotel’s kitchens are the creations of chef Turner and his team, who take particular pride in its “house-made” fare, right from their delicious butter created using Himalayan salt to the jams, chocolates, pastries. They are now developing ‘lamcon’ – a bacon that is made using lamb.

Firm in the belief that guests are not just looking for a room when they book a hotel but in the entire experience with food playing a major role, Turner aims to be a trendsetter in the field steering a team of some 70 chefs that look to cater for various cuisines – be it Scandinavian or Chinese – and dietary requirements – whether halal or vegan, gluten-free or sugar-free.

The 1,200-sq-m spa features an 18-m lap pool, a Watsu pool offering a selection of Watsu hydro experiences and water meditation, a private hammam, steam room, sauna and Vichy treatment room. The gym features equipment by LifeFitness, as well as a fitness and spinning studio, and bespoke yoga, Pilates and meditation classes.

In conclusion, Lee says he is looking at promoting the hotel “among VIPs who are looking for luxury, history and above all, privacy”. 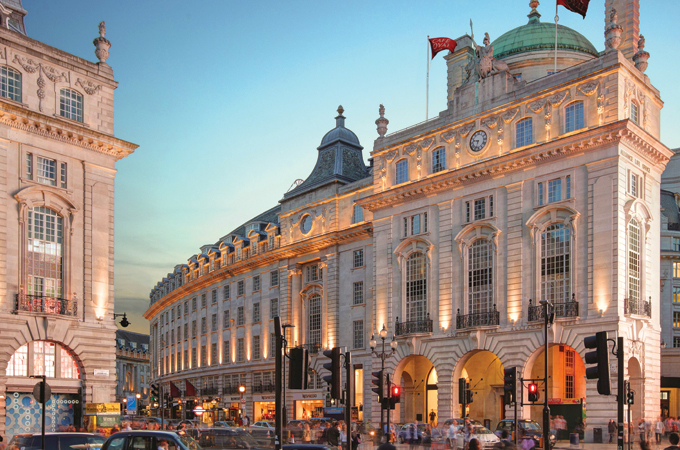 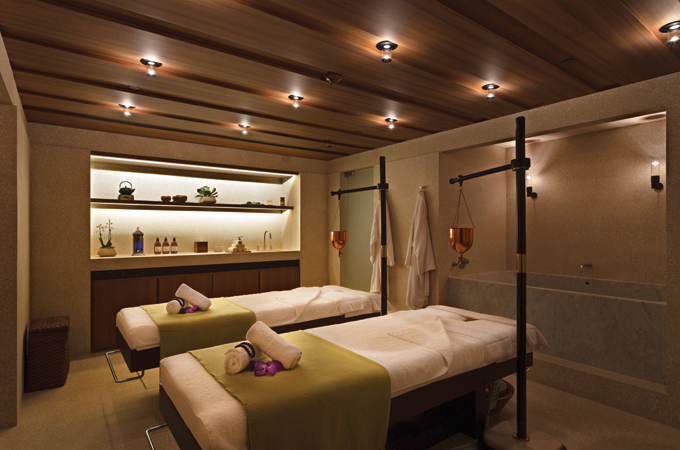 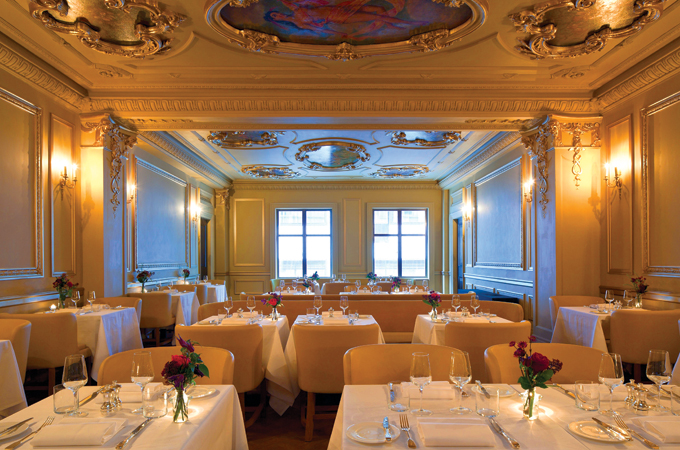 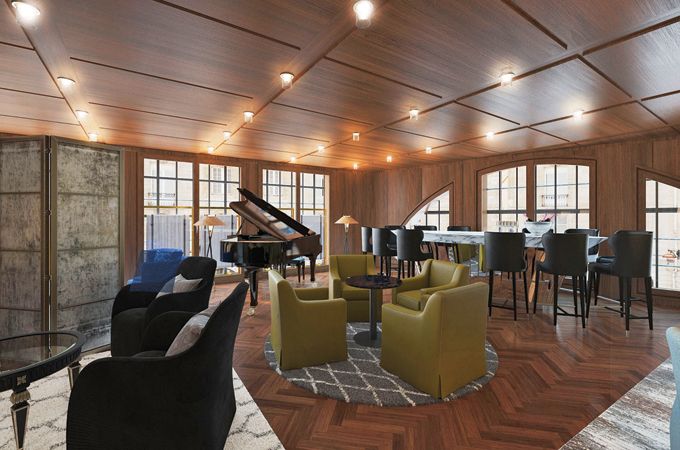 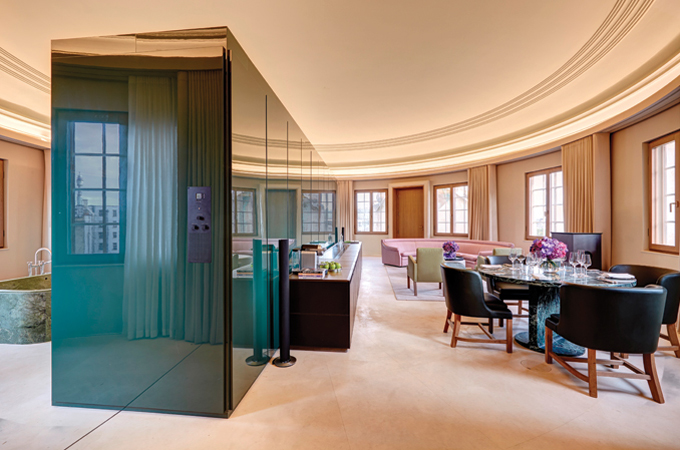