This month’s occupancy rate is expected to reach around 60 per cent, says Pirkle, adding that at peak capacity, the hotel will have 650 staff of which at least 15 per cent would be Bahraini.

The five-star hotel features 273 rooms, seven options for indoor-outdoor dining and drinks including three outlets by celebrity chef Wolfgang Puck, five swimming pools, a spa with 17 treatment rooms, two ballrooms and a “sky bridge” with meeting rooms on the 50th and 51st floors.

Located on a man-made island in Bahrain Bay, the hotel has an H-shaped design with two 68-storey towers connected by the sky bridge.

The project is expected to have injected more than a billion dollars into the local economy, but Pirkle declined to reveal the investment made and said Four Seasons Hotels was the operator on behalf of property owner Bahrain-based Signature Hotel Management Company.

Puck will be in Bahrain on March 18 to open the outlets.

The design and decor of the hotel incorporates a blend of local culture with international themes.

"We have works by Bahraini artists, including a series of ceramic tiles depicting the region's ancient Dilmun culture by Huda Al Saie," Pirkle says.

"Interiors are by Pierre Yves Rochon, inspired by ocean liners of the 1930s, with Art Deco accents and a calming colour palette, mainly blue, orange and green."

Unique offerings at the hotel include a free-form infinity pool featuring an underwater sound system, the Vento Italian restaurant with motorised floating cabanas, and one of the largest spas in the Four Seasons portfolio at 3,485 sq m. 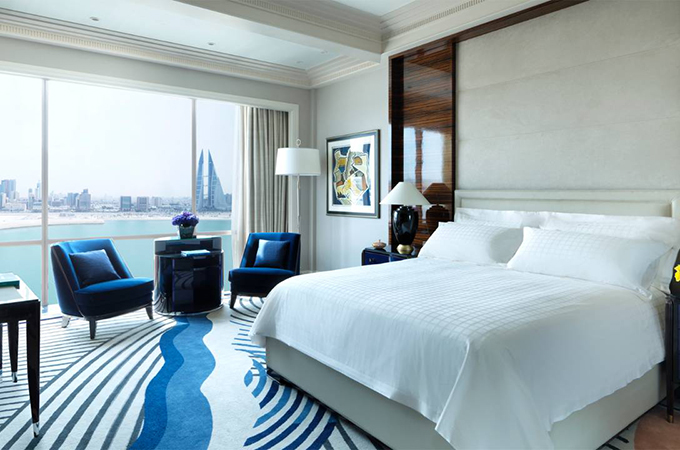