McLaren Automotive has rolled out the 5,000th model of its celebrated Super Series line of sports cars.

Based on a carbon fibre chassis and launched with the 12C in 2011, followed by the 12C Spider and then 650S and Asia-only 625C, the Super Series is now the highest volume carbon fibre supercar range ever, says the British luxury sports carmaker.

This milestone comes shortly after McLaren announced a third consecutive growth in sales, with more than 1,400 Super Series models being delivered during 2014.

The 5,000th car, a volcano yellow 650S Spider commissioned for a customer in Australia, rolled from the assembly line in the McLaren Production Centre yesterday.

It was joined at the end of the production line by the first production 12C, which has now become part of McLaren’s Heritage Collection.

“McLaren has come a long way in four short years. The completion of the 5,000th vehicle in the Super Series is a fantastic milestone for the brand. The 12C was, and still is, a groundbreaking supercar and we have continued to develop and build on this great product into the 650S which has delighted our customers and won awards across the world,” says Mike Flewitt, Chief Executive Officer at McLaren Automotive.

‘We have built a solid foundation for the business, delivering record numbers year on year, and I look forward to our next production milestone with the addition of the 675LT  to the Super Series, and the new Sports Series later in the year.’

Close to 450 of the 5,000 cars produced so far have been sold or allocated to the Middle East and Africa region, with the UAE and Saudi Arabia leading the demand.  This is a relatively small number of cars when compared to the numbers produced by McLaren Automotive competitors, however, this is a key component of the company’s business strategy to ensure exclusivity.  As such, the Middle East region has a strong 650S order bank, as exclusivity is one of the attractions of McLaren ownership along with greater power performance and technologies than the competition.

The McLaren Super Series forms the core range of McLaren supercar offering and sits above the Sports Series in the model hierarchy.

The family of models will be expanded with the McLaren 675LT confirmed for global reveal at the 2015 International Geneva Motor Show in March. 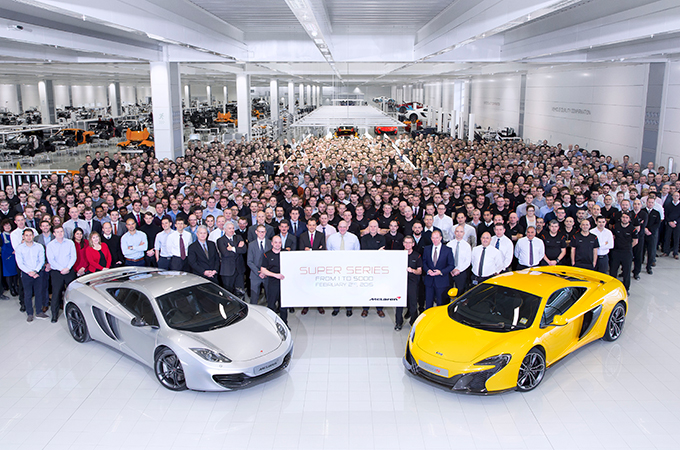