“No one can debate the hundreds of years of Swiss fascination with the art of fine horology that we all appreciate today. Yet, many will be unaware of the refined and age-old Swiss tradition regarding the creation of mimetic mechanical objects of art that imitate nature, thus blurring the lines between artistic creativity and life itself,” says a spokesman for the manufacture.

The new RM 19-02 Tourbillon Fleur, he says, epitomises these traditions of horological artistry in a vibrant expression of watchmaking distinctive to Richard Mille’s vision of timekeeping in the 21st century.

For the creation of this timepiece a special flower, the magnolia, was chosen “as its existence marks millions of years on the Earth even before the emergence of bees within the environment, flowering in an endless cycle of birth and regeneration”.

At the lower left of the dial on the RM 19-02 the magnolia surrounds a flying tourbillon escapement with five delicate, hand created and colored petals. Working either in passing, or on demand using the pusher at 9 o’clock, the magnolia opens and closes with rhythmic regularity in a delicate kinetic ballet.

However, if one look very closely, one will see that Richard Mille chose to imitate nature in the most exquisite manner possible: the flower does not just open, the entire flying tourbillon with its stone set stamen actually moves upwards 1 mm when fully opened, copying the natural motion of the flower’s arching upwards of its stamen to increase its chances of pollination.

Attention to details such as these exemplify Richard Mille’s approach to watchmaking artistry on every level.

For those interested in the technical mastery behind this grade 5 titanium tourbillon caliber, a complex mechanism comprising five levers surrounds the underside of the petals, and yet another system combined with a long pinion is used to raise the flying tourbillon and stamen upwards within the flower’s circumference – all using energy supplied by a separate, second winding barrel.

As an added attention to the tiniest details, it is even possible to adjust the opening and closing cycle

Meanwhile, the RM 51-02 Tourbillon Diamond Twister is a high jewelry tourbillon that takes all of its cues from the swirling form of a twisting spiral, a shape expressed in many organic forms around us in the natural environment.

The spray of diamonds emanating outwards in 14 rays from the tourbillon escapement at 6 o’clock can also be associated with the spiraling vortex one perceives in myriad galaxies of the Milky Way, an allusion to a whirlwind (the English translation of the French word tourbillon) or the spirally formed patterns of organic growth found within certain sea creatures, plants, trees and animals.

The baseplate of the manual winding tourbillon has been created of black onyx, a variety of cryptocrystalline quartz chalcedony composed of silicium dioxide (SiO2).

Onyx varieties with rectilinear black and white parallel stripes are actually a part of the agate family, whereas the fully black type is what one commonly calls true black onyx.

The the RM 51-02 has a free sprung balance and skeletonised bridges in PVD treated grade 5 titanium with various hand finishing techniques such as anglage and black polish used throughout the movement.

An additional security system in the form of a torque limiting crown prevents any possibility of accidental overwinding that might damage to the winding stem or exert extreme pressure on the mainspring barrel.

Each spiral ray of the RM 51-02 is perfectly set with a single row of diamonds; the case is set with white diamonds, and black sapphires have been added to accentuate case details.

As a final flourish, the crown has also been set with three rows of diamonds to complete the brilliant richness of this shimmering new timepiece.

The RM 51-02 Diamond Twister will be available in an edition of 30 pieces. 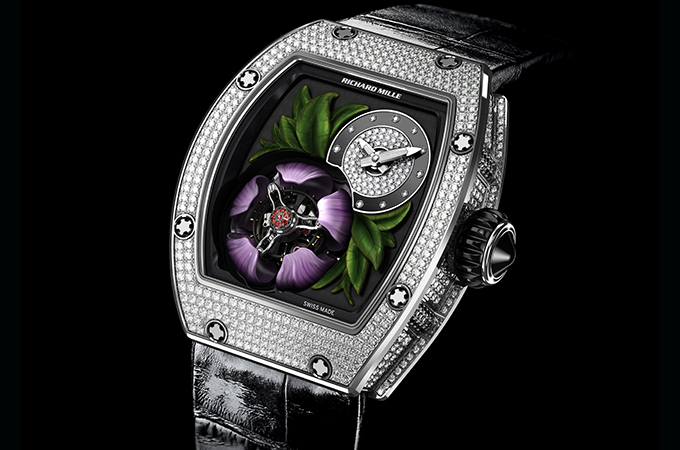 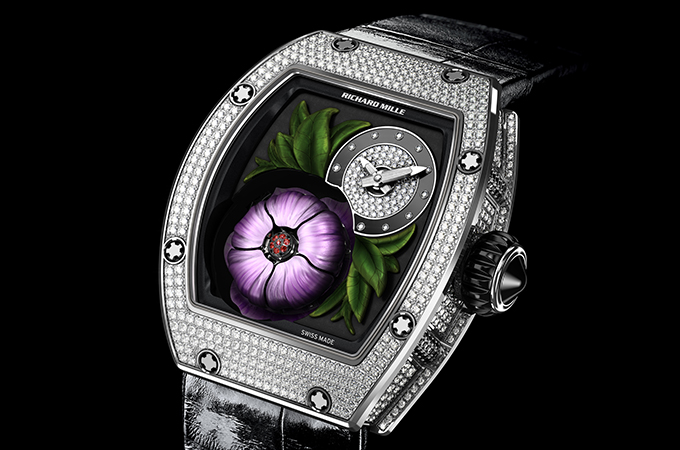 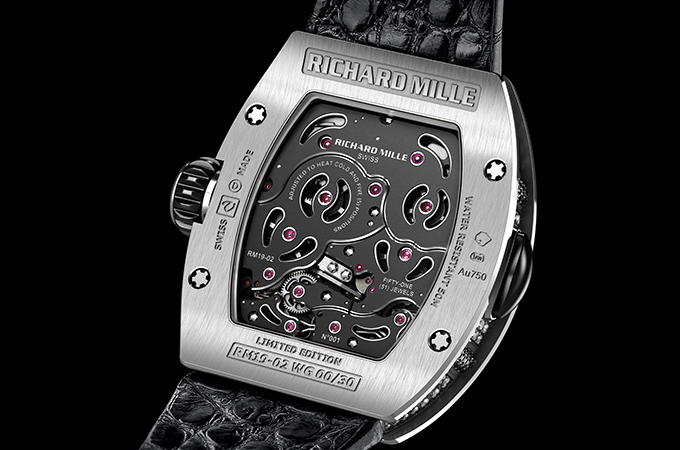 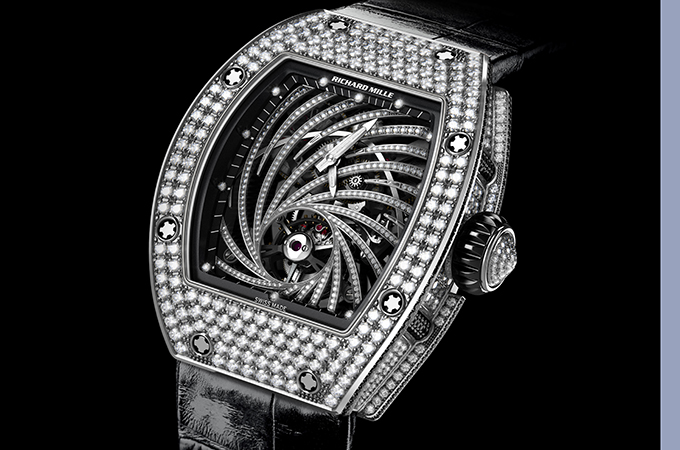 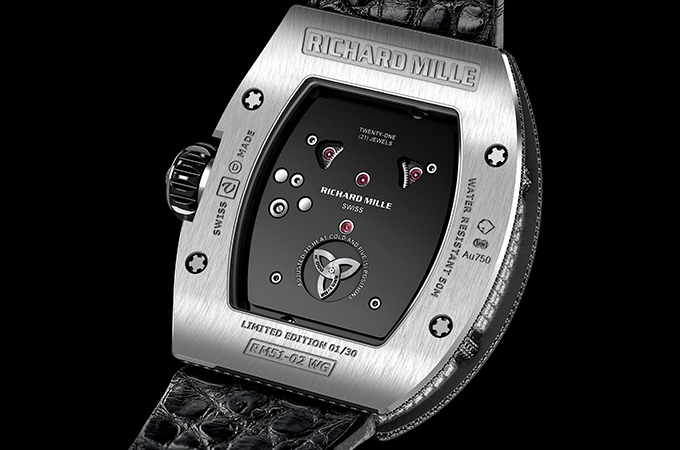