Harry Winston, Inc has bought a rare 13.22-carat, flawless, fancy-vivid blue diamond for nearly $24 million. Purchased at Christie’s Magnificent Jewels auction in Geneva, Switzerland, in May, the magnificent pear-shaped stone has been described as the largest of its kind and now will be called the ‘Winston Blue’.

Harry Winston’s Chief Executive Officer Nayla Hayek comments: “Harry Winston always had an eye for the exceptional. It is what led him to acquire some of the most famous and greatest jewels that have ever been discovered, and what earned him his place as the King of Diamonds.

When he founded the company in 1932, he started with the motto ‘Rare Jewels of the World’. With the acquisition of the Winston Blue diamond, as well as the flawless 101-carat Winston Legacy diamond last year, we can say with confidence that this is no longer just the history of the House, it is also our future.”

Harry Winston bought the diamond for a stunning $23.79 million, setting a world record price of $1.79 million per carat for a blue diamond.

“When Christie’s announced they were offering the largest flawless fancy-vivid blue the GIA (Gemological Institute of America) had ever graded, I had to buy it. Today, I am proud to own the most beautiful blue diamond in the world,” says Hayek.

The Magnificent Jewels sale realised a total of $154.19 million, achieving the highest total ever for a jewellery sale in auction history. 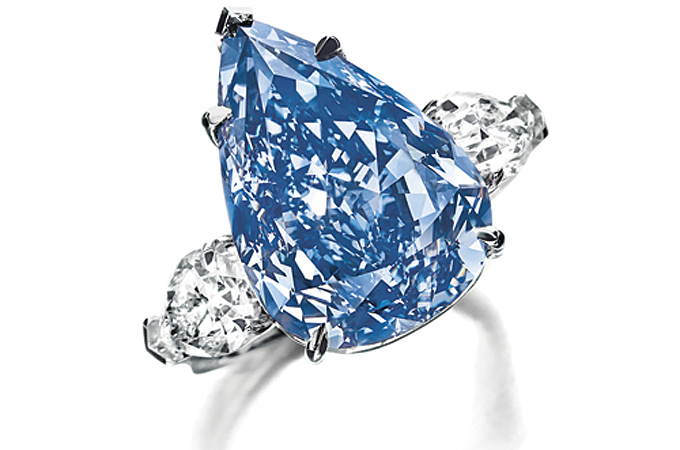