Neil Armstrong and Buzz Aldrin became the first humans to walk on the lunar surface on July 21, 1969. Their moonwalk lasted just two and a half hours, but their achievements left a defining footprint on the history of space exploration.

It was during this iconic moment that the Omega Speedmaster Professional became the first watch worn on the moon.

The Apollo 11 mission is certainly the most celebrated moment in Omega’s considerable space heritage. “With the eyes of the world on Apollo 11 in 1969, every piece of technology and kit had to be just right. There was no room for error. That’s why it is such an honour for Omega to look back and know that its watches were implicitly trusted by everyone involved. 50 years later, we are still incredibly proud to have timed mankind’s greatest hour,” says an Omega spokesperson.

The success of Apollo 11 was fervently celebrated around the world in 1969. On November 25 that year, a special “Astronaut Appreciation Dinner” was held in Houston, Texas, in tribute to the moon landing heroes.

The dinner was especially notable for a certain Omega Speedmaster that was presented to the astronauts in Nasa’s space programme. The watch, Speedmaster BA145.022, was crafted from 18K yellow gold and included a rare burgundy bezel, as well as an inscription on the caseback that read, “to mark man’s conquest of space with time, through time, on time.”

This gold Speedmaster housed the calibre 861 and was Omega’s very first commemorative numbered edition, with only 1,014 models having been produced from 1969 to 1973.

For true Speedmaster fans, the BA145.022 is one of the great highlights in the chronograph’s iconic history.

Marking the golden anniversary of the first moon landing, Omega has produced a new Limited Edition Speedmaster of 1,014 pieces, delivered with a five-year warranty.

Following the famous design of the Speedmaster BA145.022, this new chronograph has been crafted from an exclusive new 18K gold alloy and is powered by a brand new manual-winding Master Chronometer calibre 3861.

The case, bracelet, dial, hour-markers and hour-minute hands have all been created in 18K Moonshine gold – a unique new alloy whose colour is inspired by the shining moonlight in a dark blue sky. In a paler hue than traditional 18K yellow gold, Moonshine gold offers high resistance to fading of colour and lustre over time.

The polished and brushed 42 mm case of this timepiece features the asymmetrical caseband of the 4th generation Speedmaster. Around the wrist, the brushed-polished bracelet bears the five–arched-links-per-row design and a grooved clasp with an applied vintage Ω.

The outer caseback ring features mechanically engraved markings: “1969-2019” and the Limited Edition number highlighted in burgundy, as well as an uncoloured “Master Chronometer”. 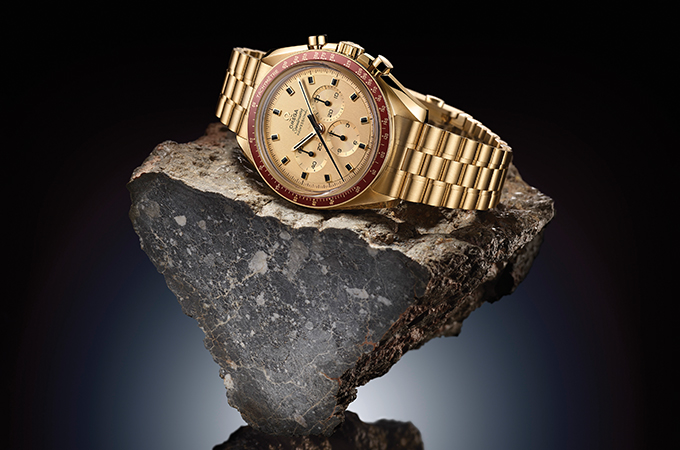 "
It is now 50 years since mankind took its first daring steps onto the moon. Omega is celebrating the occasion with a brand new Speedmaster that has a very special connection to the astronauts and the legacy of that Apollo 11 mission.