With their colour of burning embers, rubies have long fascinated civilizations the world over. The gems have fuelled Van Cleef & Arpels’ imagination ever since 1906, inspiring some of its most emblematic creations.

The maison now pays tribute to them with the high jewellery collection 'Treasure of Rubies'.

Made up of 60 unique pieces, this corpus of creations showcases the beauty and majesty of this extremely rare stone. Much sought-after, rubies of exceptional quality are often even rarer than diamonds.

Like a passionate and demanding collector, Van Cleef & Arpels has brought together more than 3,000 carats of certified rubies over the space of several years. The quest for exceptional gems has inspired the maison ever since its foundation, notably with the Arpels brothers’ numerous voyages to India and the Far East from the 1950s to the 1970s.

It here takes the form of a treasure trove of precious stones, in creations that reveal all their nuances and fires: from a flower with vermilion petals to a scarlet ribbon or a purple paisley motif, they reflect Van Cleef & Arpels’ inspirations in a palette of glowing red.

Rubies – which Indians call “the king of gems” – do not reveal all their secrets at first sight. It takes time to discover and explore them, and penetrate their hidden depths. Treasure of Rubies is an invitation to immerse the gaze in this precious material, a journey to the heart of colour, says the maison.

“With Treasure of Rubies, Van Cleef & Arpels is continuing an adventure that began in 2016 with Émeraude en majesté: dedicating a high jewellery collection to a single exceptional stone. In keeping with its historic quest for Pierres de Caractère, the maison has brought together more than

3,000 carats of certified rubies for the first time, in an ensemble of 60 unique creations,” says Nicolas Bos, CEO and president of Van Cleef & Arpels.

In 1982, Jacques Arpels told a journalist that rubies were his favourite stones. And indeed, they have frequently occupied a special place in the history of the maison. Rubies were used for the first pieces in Mystery Set and also for many of the ones that followed. Reflecting the maison’s inspirations and bearing witness to the styles of different eras, these ruby creations are not just a reflection of jewellery-making expertise; they express all the passion of Van Cleef & Arpels and its clients for this legendary stone.

Selected individually, the collection’s rubies display their magic in pieces specifically conceived by Van Cleef & Arpels’ designers to magnify their fires and show off their intense hues. The gems endow the compositions with unique personality, bringing all the subtleties of the original gouache designs to life.

The maison’s stylistic signatures run through the creations: the art of transformation, asymmetry and the Mystery Set technique. The astonishing Rubis impérial necklace can thus be worn in three different ways, while the Élixir de rubis necklace offers eight wearing options. The elements required for these transformations are hidden from sight, masked by the structure or within splendid jewellery motifs.

Asymmetry – another feature of Van Cleef & Arpels’ style – can be seen on many creations, such as the Kolam Between the Finger Ring, the Berunda bracelet or the Rivières necklace. On other pieces, such as the Unisson earrings with their symmetrical design, the colours of the stones themselves are inverted.

The Mystery Set technique, employed on the Amour sacré clip, perfectly depicts the slightly concave form of the flowers along with their soft texture. Patented by the Maison in 1933, this setting technique enables the underlying metal to be hidden beneath carefully adjusted stones, positioned alongside one another and slotted onto golden rails. The resulting piece forms a velvety surface with a three-dimensional form.

Depicting a wealth of faraway inspirations, the 60 unique pieces that make up this collection reveal an imaginary world full of elegance and poetry.

One of the collection’s major pieces, the Rubis Flamboyant necklace deploys a dazzling bejewelled harmony to reflect two of the maison’s cherished values: a passion for exceptional stones and the tradition of transformable creations.

Within a halo of diamonds shines a ruby of extraordinary quality, weighing more than 25 carats. Its history is equally extraordinary: its rough was kept as a treasure for many years by a family before being sold and cut into a cushion shape, which revealed its finely crystallized material and powerful red hue. According to the maison’s gemological experts, its colour is “perfect”. This Pierre de Caractère is being unveiled to the public for the first time on this very precious necklace.

In echo to its fires, 18 perfectly matched rubies adorn the necklace’s ethereal motifs. Weighing up to 4 carats, these oval stones are illuminated by diamonds of various cuts (baguette, brilliant, emerald), set in a complex interplay of three-dimensional volumes.

In homage to the precious necklaces of the maharajas, the Rubis Imperial showcases an ensemble of great rarity: nine rows of ruby beads of an intense red colour, weighing a total of over 1,000 carats. It took several months to bring together the stones – all of them of the same colour – and recut them

with precision. To create harmonious interplays of shade, each row was then intricately assembled using the traditional technique of threading in a falling line, which produces a remarkable effect of fluidity. Thanks to its two jewel-encrusted clasps, the necklace can metamorphose into 4, 5 or 9 rows. 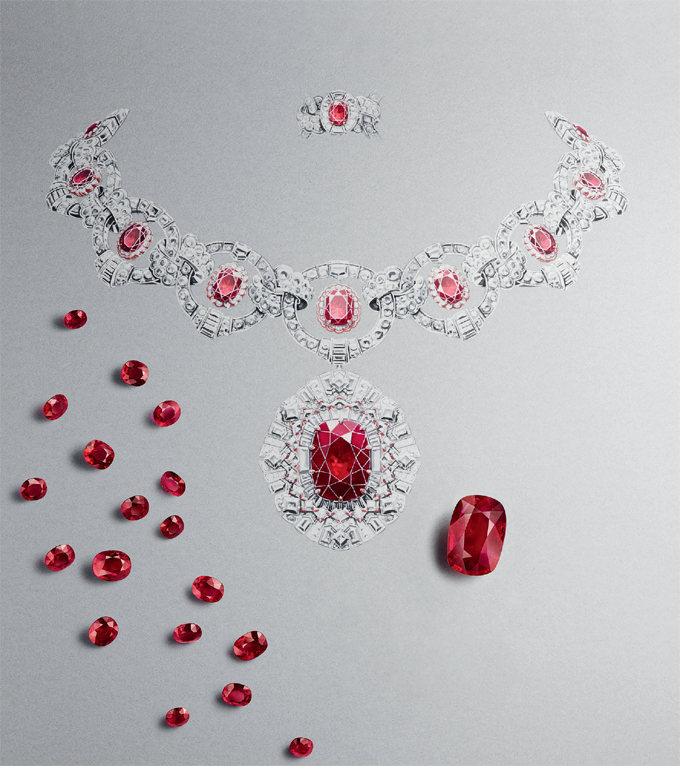 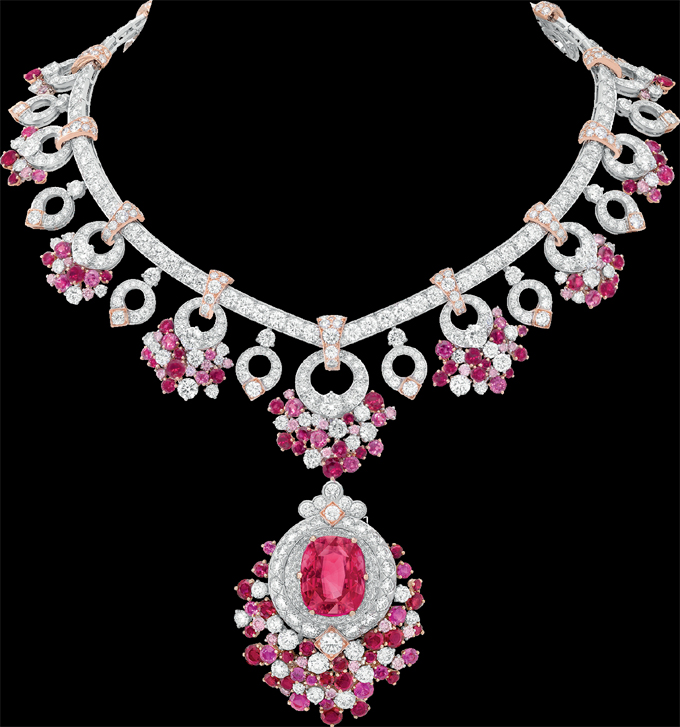 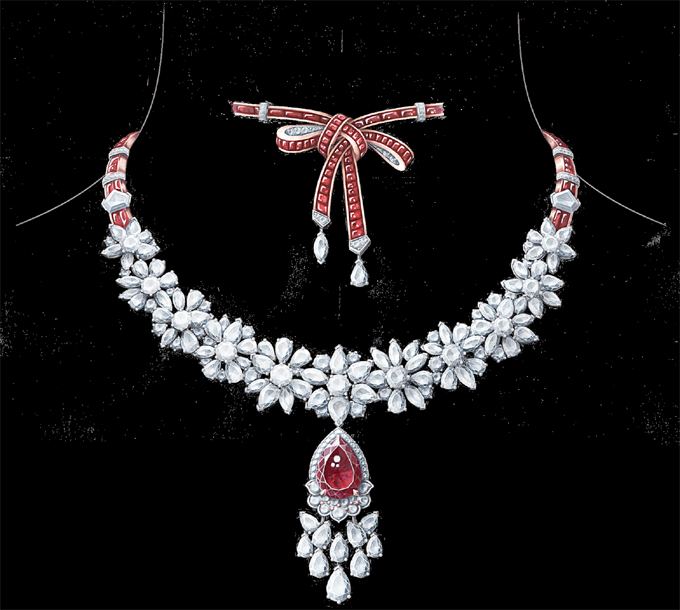 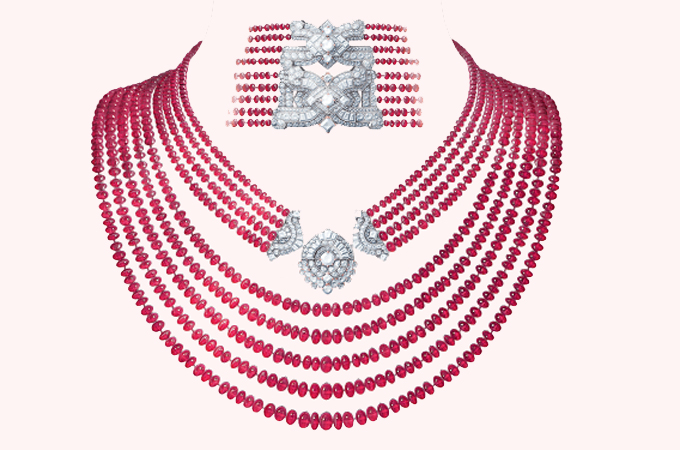 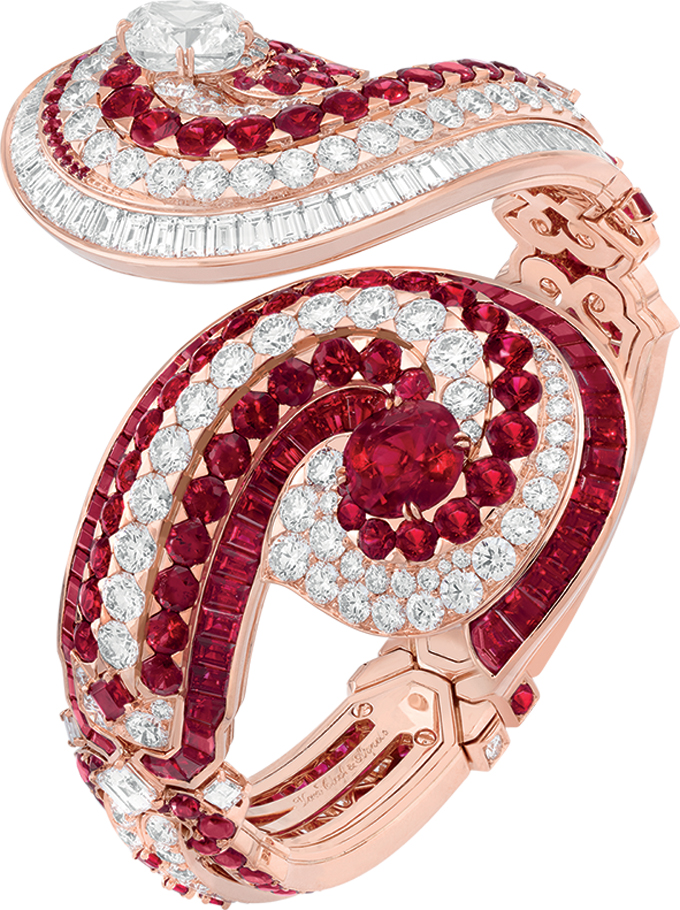 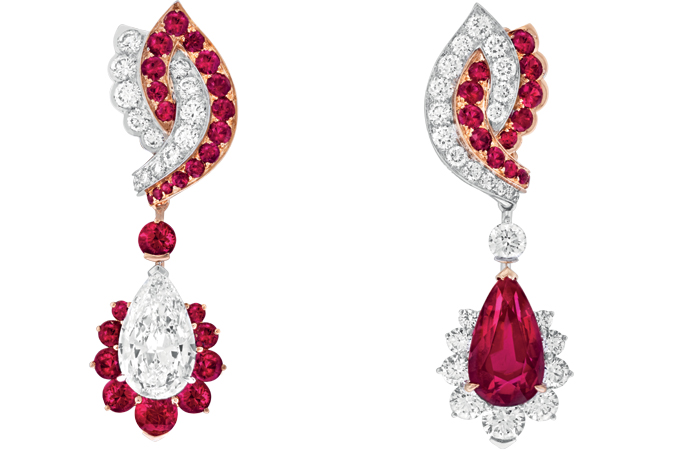 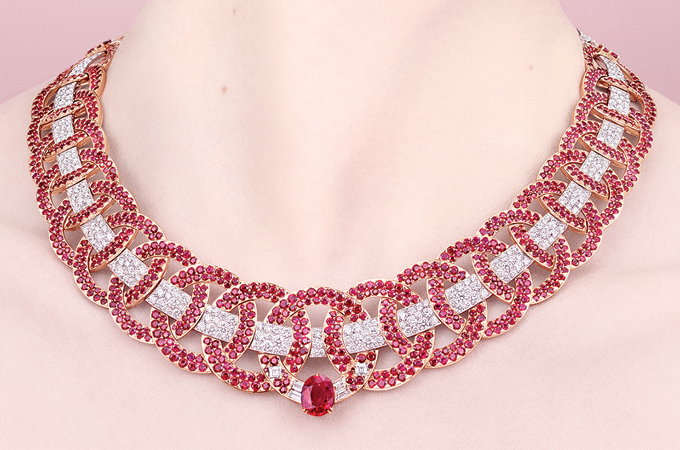