Corum has created a “Lab” collection where mechanics take precedence, in a disruptive, contemporary approach. The first two barrel-shaped series, each limited to 99 pieces, were launched recently in Beijing.

Corum’s conception of watchmaking is different, unique, off the beaten track. The new series, the Heritage Corum Lab 01, embodies this manifesto. The idea is to offer pieces with a racing, sculptural, technical, modern spirit which will only be available as limited editions.

The first two Heritage Corum Lab 01 models feature a barrel-shaped case made entirely of black DLC. A rare occurrence in modern watchmaking: the calibre that drives these two Heritage Corum Lab 01 watches is a “shape movement” – a movement that has been made to measure for the case, in contrast to a round movement that is placed in a differently-shaped case, which, for technical ease, is how the immense majority of watches are made. Here, the calibre and the case are closely intertwined, one moulding to the contours of the other.

Corum has opted for an open worked dial which allows for the CO 410 skeleton calibre that fits snugly in the case to be admired. The dial, reduced to its simplest expression, comes in grey anthracite enhanced with either red or white, depending on the version. Enthusiasts will also note the micro-rotor, visible from the dial side, featuring a contemporary spiral finish to accentuate the “speed” effect when it begins to rotate. 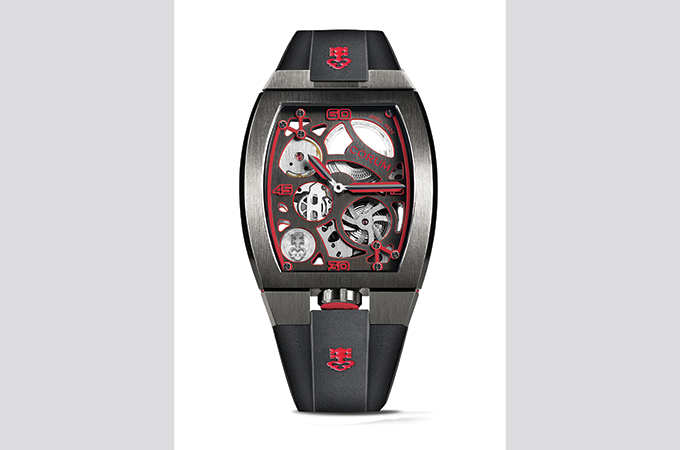