At the Paris Motor Show, Ferrari tapped into a leitmotif of the most evocative cars in the company’s history to create a new segment of special limited series cars for clients and collectors.

The Ferrari Monza SP1 and SP2 are the forerunners in a new concept, known as ‘Icona’ (Icon).

Ferrari aims to use a modern aesthetic to reinterpret a timeless style, with technologically advanced components and the highest performance possible through continuous innovation.

The Ferrari Monza SP1 and SP2 are inspired by barchettas of the 1950s which were driven to victory in international motor sport not just by official works team drivers from the Scuderia, but also by a legion of gentlemen drivers who, in those years, frequently found themselves wheel to wheel with legendary professional drivers of the era.

The result is a car that seems sculpted by the wind. It is the purity of the styling elements that impresses – an aesthetic that is futuristic but, at the same time, a respectful yet un-nostalgic homage to the past.

This model’s soul is, as is true of all Ferraris, in its engine. The Ferrari Monza SP1 and SP2 are equipped with the most powerful naturally-aspirated V12 ever produced by Ferrari. Thanks to specific areas of development, the power of the 812 Superfast’s 6.5 litre has been increased by 10 cv to 810 cv at 8,500 rpm with a slight increase in torque to 719 Nm at 7,000 rpm.

of carbon-fibre has been made throughout the construction of the Monza SP1 and SP2. 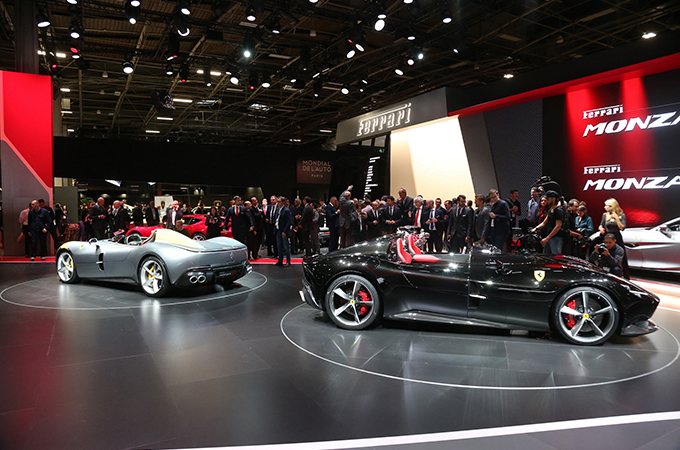