Ferrari’s first V8 four-seater fits into the category of a daily driver, offering all luxuries an enthusiast can think of and bringing screaming joy for occupants

Boys of the luxury cars club can rejoice in the fact that they can now take two more friends in their Ferrari GTC4Lusso T, which follows on the success of its V-12 predecessor with the same name sans the ‘T’.

This first V8 four-seater from the prancing horse fits into the category of a daily driver, but with all luxuries an enthusiast can think of, as Arabian Knight found out during a short spin around Bahrain.

The first thing you notice is the GTC4Lusso T’s unusual length. The car is as long as its name, it’s 4.922 m, with the engine sitting right in the middle. However, it is lighter than the previous model.

And it achieves this class-leading performance because of new pistons and con-rods made of high-resistance aluminium alloy that maximises pressure inside the combustion chamber, while new more linear high- and low-pressure air ducts in the intake system minimise losses, and a new intercooler increases air cooling and minimises fluid-dynamic losses.

As the car goes up through the gears (from third to seventh), the amount of torque delivered by the engine increases all the way up to 760 Nm in the seventh gear. This has allowed Ferrari to adopt longer gear ratios in the higher gears to the benefit of fuel consumption (the car’s range is, in fact 30 per cent more than the V12 model).

The rear-wheel steering system is integrated with the latest evolution of the electronic controls of the SCM-E suspension, ESP 9.0 and third-generation Side Slip Control (SSC3), allowing a firm grip on the road and perfect control even at steep cuts.

The GTC4Lusso T is as exciting from the inside as it is from the outside. Comfort starts from the moment you hop in, shut the door and push start engine. A delivery system pushes the seatbelt forward so you don’t have to turn around to reach for it.

Careful attention has been paid to the cabin design. It gives a sporty but elegant look. There is soft leather all around, including on the dashboard, door panels, and seats, and components of metal or carbon-fibre. One can wish for more storage space, though. You can find holders for a cup or two below the AC console in the front and some at the back. The window control buttons are near the handrest. There are protruding air-conditioning vents – four in the front and two in the back to keep the interior cool in the Gulf’s scorching heat.

The GTC4Lusso T comes with the latest infotainment system complete with an impressive 10.25-inch high-definition responsive touchscreen in the middle of the dashboard.  A separate digital display is also fitted for the passenger, who is like your co-pilot and keeps an eye on engine dynamics and navigation, in addition to media access. The touchscreen displays views of the front and rear through parking cameras. There are also parking sensors front and back.

The sporty steering wheel is adorned with many controls, including the ignition switch, wiper controls, and the manettino driving-mode knob. The turn signal push buttons are on both sides of the wheel spokes, markedly visible to the driver.

The front seats are automatic with adjustable lumbar and seat memory. At the back, there is enough room for passengers to comfortably enjoy a long ride with decent views of the outside.

The boot is huge and can hold 450 L, and the back seats can fold to further expand the cargo hold.

In conclusion, the biggest joy of driving a GTC4Lusso T is with two extra friends or family members – four smiles instead of two. It’s the best Ferrari made for daily drives. Sporadic sprints to show off all that horsepower on that long drive can get your passengers screaming in joy.

The GTC4Lusso T is sold in Bahrain by Euro Motors, the official importer of Ferrari and Maserati luxury sport automobiles. 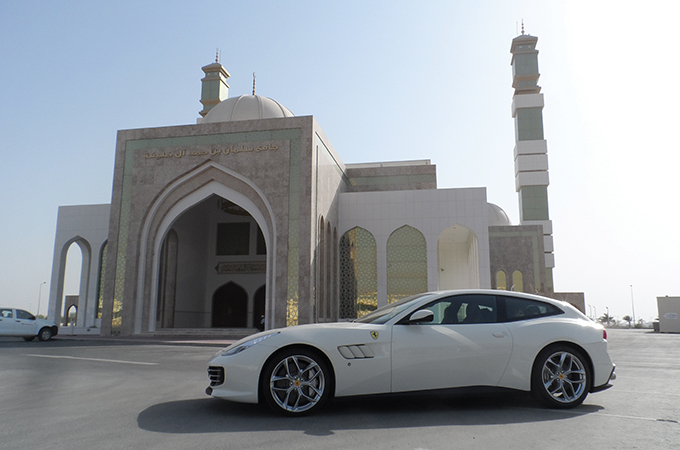 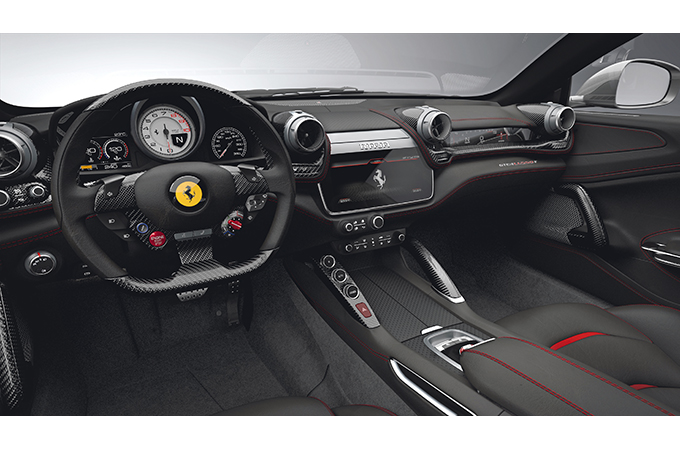