Cartier will be throwing the spotlight on three very special watches at the upcoming Salon International de la Haute Horlogerie (SIHH) watch show, which will be held from January 19 to 23 in Geneva, Switzerland.

These include the Rêves de Panthères, the Ronde Louis Cartier Filigree watch, and the Rotonde de Cartier Astrotourbillon Skeleton watch.

The Rêves de Panthères is described by Cartier as “a dream of femininity”.

A timeless subject of artistic expression at Cartier, the panther enters the decoration – at once diurnal and nocturnal – of a day/night movement in the tradition of the maison’s complications.

The watch, says Cartier, is “a complete and tangible vision of time measurement that resembles a jewellery dream lulled by a precious sky that changes from starry night to shining sun”.

Cartier’s emblematic panther has over the years ventured from one movement to another, sometimes skeletonised, sometimes oscillating, giving rise a creative repertoire to which the latest Rêves de Panthères watch belongs.

The famous feline appears for the first time in a pack, surrounding a fabulous disc: a graphic, feminine and jewelled interpretation of one of Cartier’s most recent fine watchmaking movements.

Driven by the self-winding 9916 MC calibre, the sun and the moon take turns indicating the time, appearing and disappearing in an alternating astral display, a magical spectacle observed by the three panthers.

Entirely pavé-set with diamonds, this celestial watch is an ode to the French luxury maison’s emblematic animal. On the Rêves de Panthères, their silhouettes spotted with black lacquer mark the timeless aesthetic with their enchanting trace.

Limited to just 20 pieces, the watch takes a figurative, precious approach to the ancient art of filigree, and is testament to Cartier’s mission to perpetuate forgotten crafts and expertise, such as granulation in 2013.

As diaphanous as lace, the art of filigree uses gold or silver wires soldered together in order to create an openwork grid with a desired motif.

For Cartier, the challenge consisted not only in adapting it to the restrained dimensions of a watch case but also elevating this craft by opting for a very precious selection of materials such as gold, platinum and diamonds.

The craftsmen of the Maison des Métiers d’Art worked with beaten gold and platinum micro-wires that required specific equipment specially created on site. Twisted, rolled, curled and cut into little rings, these wires were assembled using the openwork filigree technique that allows the elements to be attached on the sides but not to the base.

Over a month’s work was required to create the lacework watch that is home to a pair of panthers whose black-lacquer-spotted coats are literally woven from fine filigree elements of gold and platinum set with diamonds.

Sovereigns draped in brocade, the two panthers look at each other with their emerald eyes. This delicate feline tête-à-tête is set against the background of a starry sky and surrounded by a middle pavé-set with diamonds, which is partly covered by the motif.

Cartier points out that this work of art brought together numerous kinds of craftsmen - from gem setters to goldsmiths and jewellery makers to watchmakers - to give its emblematic animal “a rare preciousness with a balance, grace and absolute refinement that are as ethereal as the finest lace”.

The Rotonde de Cartier Astrotourbillon Skeleton is the latest addition to Cartier’s Astrotourbillon, one of the house’s emblematic complications in its ‘fine watchmaking’ collection.

In 2010, Cartier offered a new vision of tourbillon design with the Rotonde de Cartier Astrotourbillon. For the first time, this complication was no longer limited to its function, which consists of guaranteeing better timekeeping and reducing the effects of gravity, but instead was fully incorporated into the aesthetics of the watch.

Unlike classic tourbillons which rotate around their own axis, the Astrotourbillon is distinguished by its elongated cage that enables the balance to make a complete circle of the dial in a minute, thus marking the seconds and evoking a star.

In 2012, Cartier decided to use carbon crystal for the Astrotourbillon, making it the first Cartier movement to benefit from this technical advancement.

Now, in this new interpretation, the Astrotourbillon is entirely laid bare, disentangled from all other mechanisms in order to move into the foreground.

Behind lies an aesthetic intention, a daring creative stance that aims to highlight the movement’s structure so that it “disappears” behind the imposing XII and VI on the dial, a Cartier signature.

Freeing up this space allowed the maison’s watchmakers to showcase the Astrotourbillon in all its majesty and increase the amplitude of its rotation.

Entirely skeletonised, the main plate of the 9461 MC movement rests on just these two Roman numerals. In this unique architecture, these bridges powerfully structure the calibre, defining its appearance and supporting the construction.

This architecture is aerial both in terms of its structure and its tourbillon cage. In fact, its elongated form enlarges the amplitude of its trajectory and evokes a celestial body travelling through space.

Limited to 100 pieces, the Rotonde de Cartier Astrotourbillon Skeleton embodies the maison’s ambitions as it is at once creative and innovative, from both a technical and aesthetic perspective.

In this watch, Cartier says it has accomplished the double feat of “reducing the movement to an almost sculptural form and generously enlarging the orbital trajectory of this unique complication”. 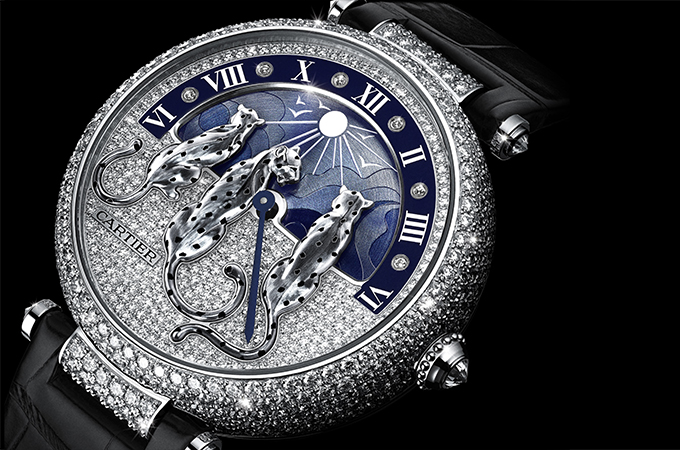 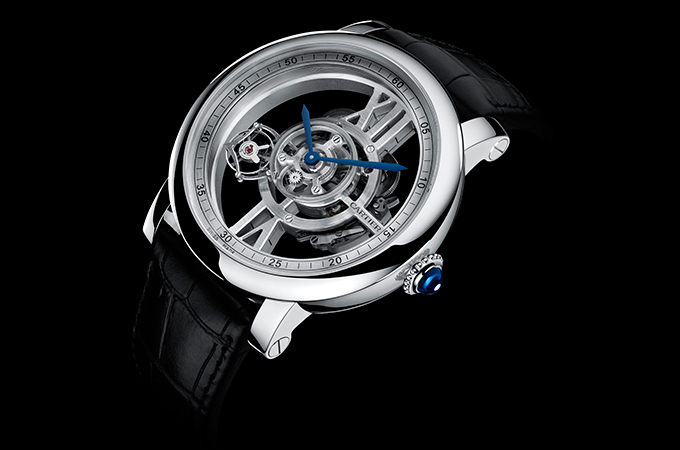 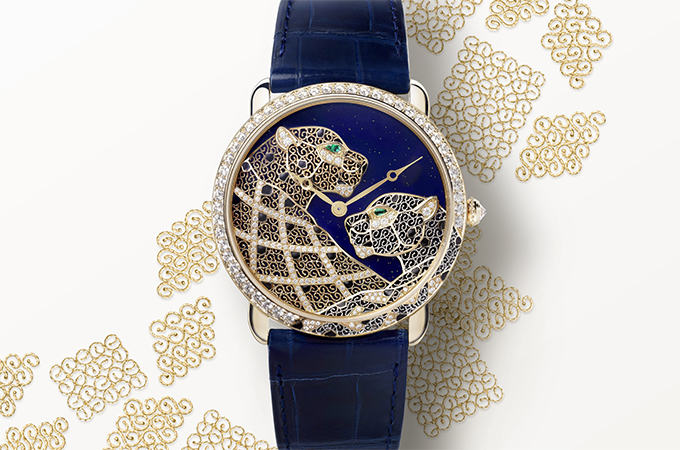