Ziad Al-Turki’s story is never complete without detailing his contribution to the game of squash. The businessman from a country with little squash tradition, stormed into the world of squash and almost single-handedly propelled the sport to new heights.

Since 2008, Al-Turki is the chairman of the Professional Squash Association (PSA), the global governing body responsible for the administration of both men’s and women’s professional squash around the world. With over 750 registered players and over 200 events taking place across the globe every year, the PSA World Tour showcases the game of squash at its highest level.

Tracing how he got the squash bug, Al-Turki says it all started with his uncle Abdulaziz, with whom he was spending a lot of time as a child, building a court. “It wasn’t really a squash court; it was a big room which had lines in it and we played squash.”

Why squash? “I was overly sheltered when I was a kid and this was an ideal sport for me who did not really like playing football and getting hurt. It’s indoors, within an air-conditioned environment and I did not have to play with bullies; I really enjoyed it,” says Al-Turki, who admits he still looks to get autographs from stars of the game.

“During my stay in Connecticut on vacation, I was looking to take squash lessons and was pleasantly surprised to know my club was hiring Brett Martin, one of the game’s leading players in the late-1980s and early-1990s. I was just in awe of the fact that I was with him and we became friends. Martin is one in a million, nobody can hit a squash ball like him,” he adds.

“One of the first things I did when I came back to Saudi Arabia after my studies was to build a squash court in my home and started playing,” he continues.

The big break came in 2004. “We always sponsored amateur squash tournaments in Aramco and I started thinking about a professional game in Saudi Arabia. I invited Martin for an exhibition match and while he was here, the idea of a tournament in Saudi Arabia with a professional squash association was born. I was told by the PSA that we can do a tournament with a prize money anywhere from $3,000 to $127,500. I said I wanted to do it with $127,500 prize money, the highest. I wanted it to be bigger than the others in the GCC. I did it out of my love and pride for Saudi,” says Al-Turki proudly.

The next year, after listening to players, the prize money was increased, attracting world-wide attention. In squash terms, the Saudi event was a ‘boast’ for Al-Turki.

The story of Al Turki’s move to the global squash arena is also quite interesting.  “In 2008, the World Series Finals being played in London had some problems and the person running it did not want do it anymore. So I took it over,” he says. A ‘nice get’ and he succeeded in organising the event quickly.

In the same year, the world’s top eight players told him that things had to change and he was the one who can make that change. For that he had to be on the PSA board. He was soon inducted to the board and at the end of the year, he was chosen as its new chairman. And the rest is history, as the cliché goes.

There was a lot to do for the energetic and passionate chairman. In 2009, the PSA went through a whole new phase. The courts were redesigned; a new standard for the floor was created; new colours and lighting were introduced. “In short, we broke several myths to create a new image for the sport,” Al-Turki says.

Next year, the changes went further. The event was held in the Queens Club where a special structure was built on their tennis centre court. “It really rocked this very prestigious club. We did a campaign in London with the slogan ‘Squash is back’. We had neon rackets and neon balls, DJs. We wanted to change the image of squash and portray it as a youthful, dynamic sport and not as an older, elitist one.”

Actually the outcome of that campaign was tremendous and the participation in London steadily increased. In subsequent, more changes ensured the presentation was world-class. Soon, against many odds, Squash TV was launched and the quality of its production was key to SKY TV taking the sport live. In 2011, the World Series Finals at Queens Court in London went live on SKY TV.

“Over the last six years, we have been able to go live in 154 countries and the prize money and the sport continue to grow from strength to strength,” says the supremo.

It’s no wonder Al-Turki is credited with revolutionising squash.  Actually, Saudi Arabia was the trigger for it. “I used the Saudi tournament to push the prize money higher. I could not do too much in terms of presentation here. So I used London for changing the way this sport is presented.

“I was lucky that my father supported me at that time. Lot of the sponsorship came from my father. All I cared about was the players and the sport; I wanted this sport to reach the limelight that I felt it deserved. And I felt that these players deserved more,” he says.

There was a time when players had to put money from their own pockets to take part in tournaments. “Now, players are making enough money to lead a happy life. I am happy that I have contributed to this and it gives me great satisfaction,” says Al-Turki.

The success is a result of the enormous amount of time and money Al-Turki has expended. “There were few years when I was deprived of sleep and I would sleep on vacation or on a plane. All of us –especially Lee Beachill and Alex Gough, who are now the COO and CEO – spent a lot of time together. We ended building an association.

“Now I sit on the sidelines as we have professionals running the sport including Gough, Beachill and Tommy Berden, who has now taken over the commercial side of things, and an active board. I am still involved and still trying to push as much as possible. We are trying to land a World Tour sponsor at a major level. I hope someone reading the article will come forward. Actually, we are perfect for airlines or banks,” he adds.

“It will happen again,” he says. “Hopefully, we can bring back a men’s event and it will be an annual event. The PSA World Tour is full this year but we are going to find a slot probably for 2019 and then do a men’s and woman’s tournament back-to-back,” says Al-Turki. 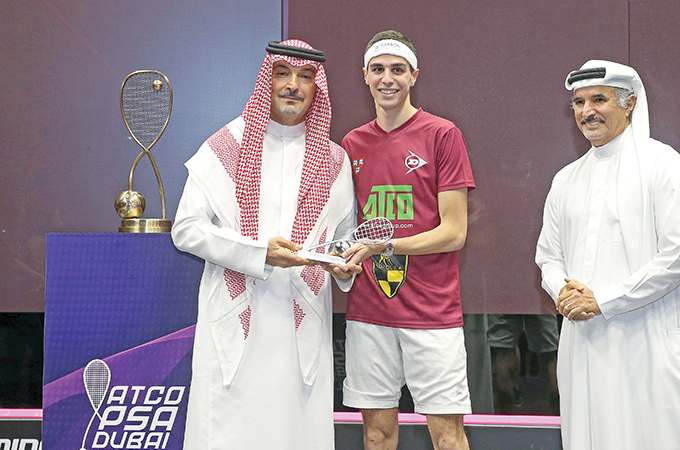 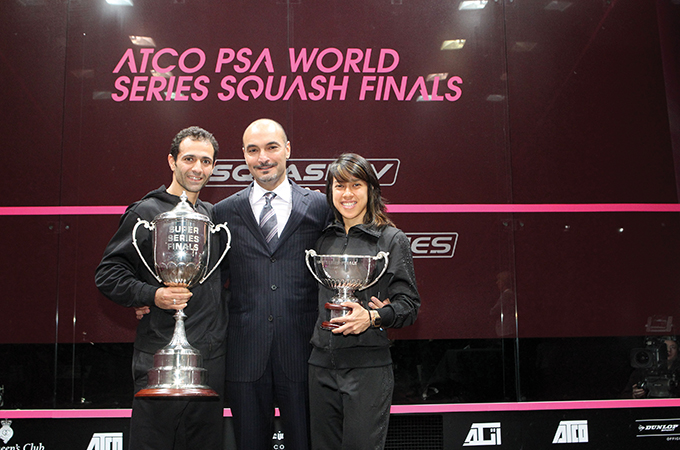 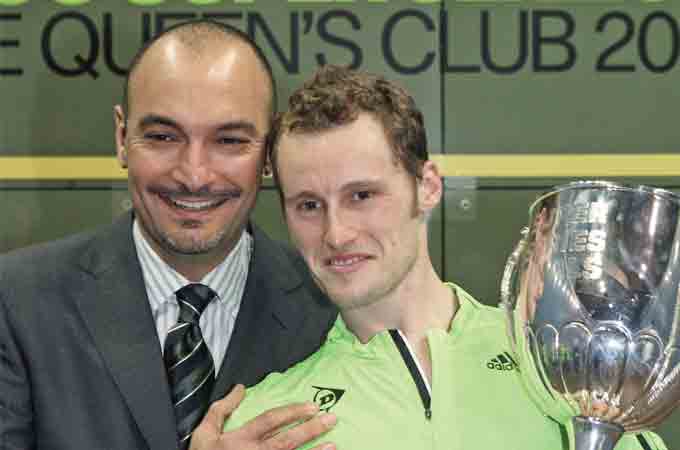