To celebrate the adventurous spirit of the people of the UAE, the desert life-style of the ancient tribes and its grand tradition of falconry, Ulysse Nardin has crafted the exceptionally unique Classic Tourbillon Falcon in a limited edition of eight timepieces, which will be available over Eid.

Ulysse Nardin's master watchmakers have created this exquisite timepiece drawing deeply on the inspira-tion of the desert heritage of the region as well as the much-loved tradition of falconry that has been held dear by the people.

The stoop and swoop of the peregrine falcon and its exhilarating speed and agility are much loved qualities that resonated through the ages and are intertwined as an integral aspect of the desert dweller's lifestyle.

While the sport has drawn in both rulers and commoners, it was His Highness Sheikh Zayed bin Sultan Al Nahyan, founding Father and first President of the UAE, whose love for the falcon saw him pioneer initiatives to preserve the bird and the sport for posterity, by putting in place far-sighted initiatives to conserve and protect the unique bird, which has seen the sport continue to this day.

Equipped with the UN-178 Manufacture movement, the new Classic Tourbillon Falcon is adorned with a dial displaying a faithful reproduction of a falconry scene in the desert at sunrise. One can admire the quality of the details, produced by the dexterous hand of the master enameler.

The miniature scale and the repeated firing necessary to create the vitreous enamel highlights the superior talent of the masters, who spend more than 50 hours making the gold “cloisons” or compartments that comprise the dial’s design. The Classic Falcon Tourbillon provides a three-dimensional effect thanks to the thickness of the enamel layer.

On the right, a man can be seen in a white kandoura, the traditional Emirati clothing for men. On the left is a peregrine falcon, the national emblem of the UAE. With wings spread in a strong, majestic pose, it is about to land on the welcoming arm of its master, who is looking in its direction.

The peregrine falcon is the fastest animal in the world; thanks to its keen eyes, it can dive on other birds with astounding speed and then seize them in the steel grip of its claws. An agile predator, the falcon quick-ly became a symbol of strength and courage, and in time even the national emblem of the UAE. Like the camel or Arabian horse, the falcon is fixed in the memories and hearts of the Arab people like never before.

All the expertise of traditional watchmaking is incorporated into this exceptional 44 mm timepiece, featuring cloisonné enamel, flying tourbillon, silicon escapement and a power reserve of over 7 days. Each watch of this 8-piece collection in white gold is unique and enameled by hand. Ulysse Nardin remains one of the few manufacturers to master the enameling technique in-house and one of the first to have contributed to the revival of the striking mechanism. 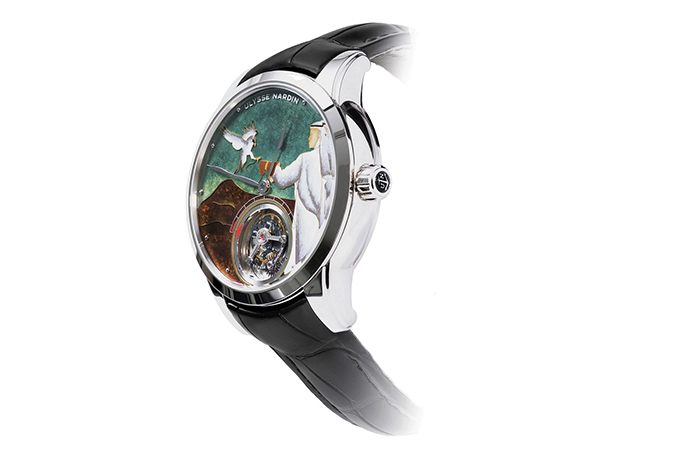 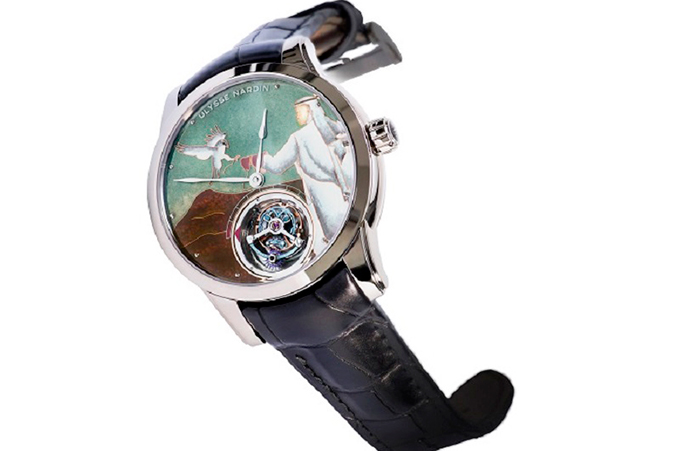 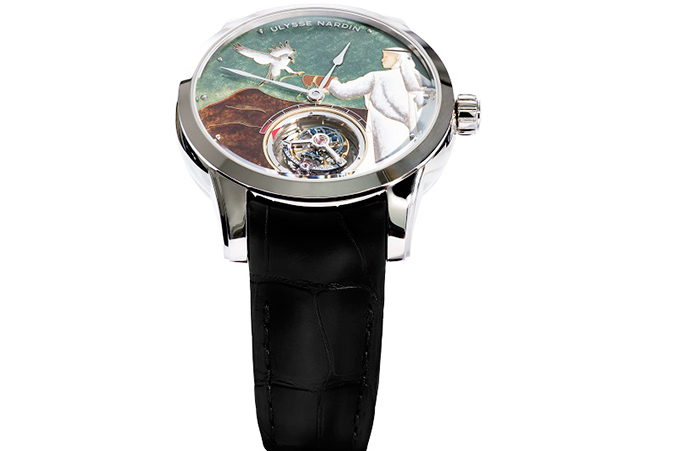