Breitling, the innovative Swiss watch brand, highlighted its bold new vision in Dubai recently at the launch of its new Navitimer 8 collection.

The brand’s global CEO Georges Kern introduced the new models along with the brand’s next chapter, dubbed its ‘legendary future’, during an event, part of Breitling’s international Roadshow which debuted in Shanghai in late January with further stopovers in Zurich, Munich, London, New York, Tokyo and Singapore.

Kern, who was named CEO of Breitling in the summer of 2017, discussed the brand’s rich heritage and the future direction it will take.

“I am very proud to have the chance to introduce the new Navitimer 8 collection here in the Middle East. It pays homage both to the brand’s innovations and its accomplishments in the pioneering days of aviation and is also an indication of what lies ahead,” he said.

Breitling certainly has one of the richest histories in watchmaking and it has had quite striking designs to offer in the past. Kern says the brand needs to enlarge its offering to reach global clients, including the Eastern markets.

“We want to be a globally successful brand. To do this, we need to enlarge our offering. This doesn’t mean we are going to have more references. On the contrary, we want to make far less number of references and make them more readable,” he said.

The brand will focus on three key pillars: Air, Sea and Land and have lines focused on these areas.

“We want to be an authentic brand for men and women of style and action. We want to be informal luxury and not exuberant. We want to be more stylish, elegant, still very powerful and more agile and certainly more contemporary,” he indicated.

Society is changing and consumers are looking for more traditional products with roots and DNA, he added. The new advertising campaigns of the brand will also reflect the changing attitudes, especially the young people.

People are looking for more discreet watches that add real value from brands with real history and DNA, he said.

Kern also announced that the brand will open a second Breitling Boutique in Dubai Mall, the world's largest shopping mall, later this year.

He said the Middle East is a key market for the brand. “The UAE and the whole Middle East is booming from an economic point of view and it has a rising population. It is one of the biggest and fastest growing regions in the world. There are three types of clients here: the local clients, the expats and the tourists.”

The company will focus more on digital – both in the way it communicates and interacts with the consumer and also in the way it sells the products, he added.

The Navitimer 8 family introduces five distinct models that are worthy heirs to watchmaking’s richest aviation tradition, drawing heavily on Breitling’s design DNA and the technical features of the first board clocks and pilot’s wristwatches as well as on the Huit Aviation Department’s commitment to quality.

The 8 in its name is a nod to the Huit Aviation Department, which was set up in 1938 to produce cockpit instruments as well as classic pilot watches for civilian and military use. At the time, Willy Breitling chose the name “Huit,” the French word for “eight”, as a reference to the eight-day power reserve offered by its storied cockpit instruments.

Each of the five new models in the collection expresses a design code – conceived down to the minutest detail – with a high recognition value.

Guy Bove, Creative Director at Breitling, described the inspiration behind the Navitimer 8’s exterior design cues as follows: “With the Navitimer 8, we wanted to create a watch that was in line with our vision for the brand’s future, but which would also pay tribute to the great Breitling watches of the early to mid-twentieth century. From a design perspective, it occupies a unique position between Huit’s onboard clocks and the Navitimer.” v 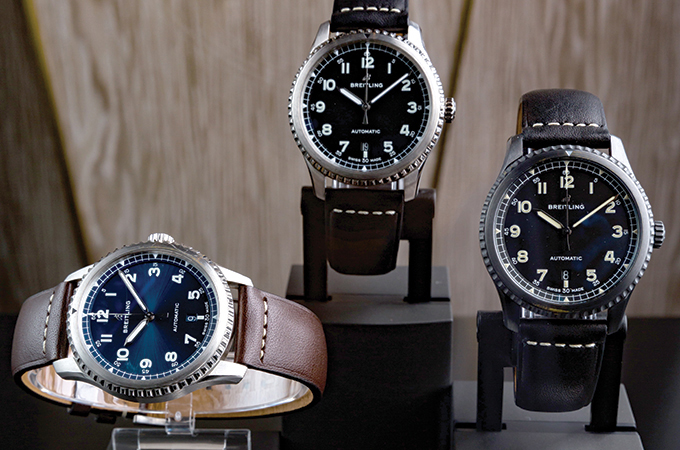 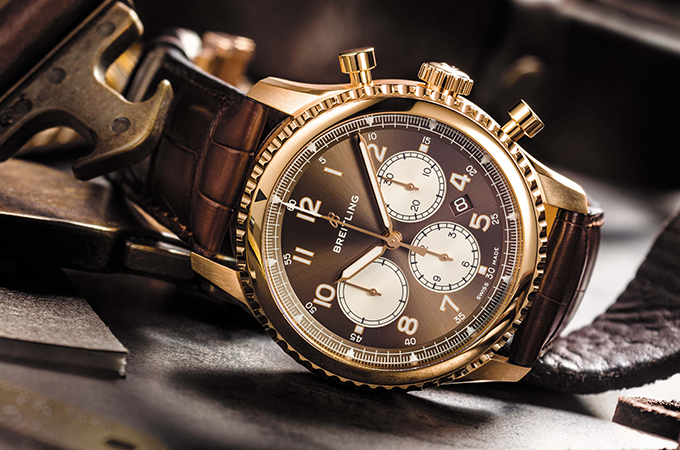