Luxury Goods, Jewellery & Watches
Speedmaster Dark Side of the Moon

Fifty years after the Apollo 8 mission, the first to orbit around the moon, Omega is releasing its newest Dark Side of the Moon timepiece. Unlike previous Dark Side models, this release houses a specially decorated version of Omega’s famous Moonwatch movement – a calibre that deserves to be seen!

To display the workings inside, the dial of this timepiece has been expertly skeletonised. Inside, laser ablation has been used to precisely decorate the bridges and main plate of the blackened movement, producing realistic imagery of the lunar surface. And like the moon, it reveals two unique sides. The dial-side is a light shade to represent our view of the moon’s surface from Earth, while the back of the watch delves into the dark side that only astronauts get to see.

In  this new creation, Omega has  again embraced its popular “Dark Side of the  Moon” innovation, producing the entire watch in black zirconium oxide ceramic. To contrast this dark tone, the brand has chosen a yellow colour coding.

“We’ll  see you on the other side” – the special words engraved on the caseback – were spoken by Command Module Pilot Jim Lovell on board the Apollo 8 mission at the start of the crew’s pioneering orbit to the dark side of the moon - a mysterious hemisphere never seen before by human eyes. Seconds before the spacecraft disappeared beyond the range of radio contact, Lovell spoke these final assuring words to ground control. 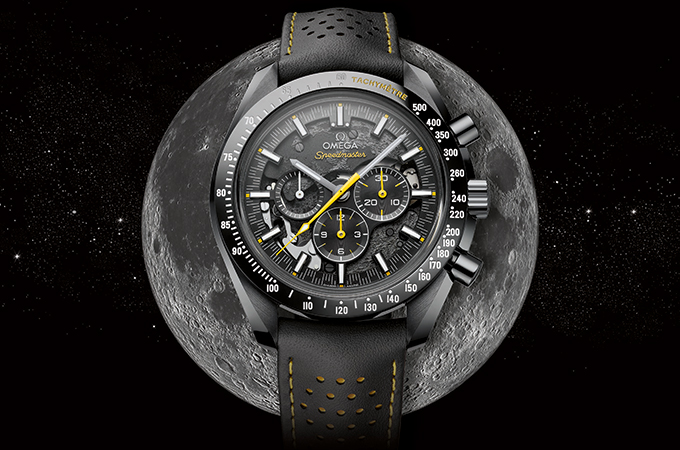