As the world gets ready to welcome 2015, Swiss luxury watch and jewellery maker Chopard has unveiled two watches that pay tribute to the Chinese New Year.

In one, Chopard uses the ancestral Japanese art of urushi to in create the LUC XP Urushi inspired by the Year of the Wood Goat, the most artistic of the Chinese zodiac signs.

In the other, Chopard’s classic Imperiale watch appears adorned with jade, an exceptional stone symbolising virtue and purity.

Chopard has established a tradition of celebrating each new cycle of the Chinese calendar. The Year of the Wood Goat begins on February 19, 2015 and will end on February 7.

The dial of the new LUC XP Urushi is entirely crafted by hand. It places Asia in the limelight by using urushi, a traditional Japanese lacquer technique.

The scene depicts a serene goat, viewed from the side. Portrayed on a bed of flowers beneath colourful stylised clouds, it inspires a sense of merriment and tranquillity.

As represented in the Chinese zodiac, the goat is a peaceful creature, even if it cannot bear injustice, which it is always keen to oppose. Endowed with a creative rather than a belligerent personality, it draws upon art to assert its point of view. Easy-going and generous by nature, it is the bearer of soothing virtues and heralds a sense of harmony associated with values relating to the land and to family.

The sap of urushi tree found in Japan and China secretes the varnish used for lacquerwork. Its resin is harvested once a year in extremely small quantities. Only after three to five years and a specific treatment will this resin become a highly resistant lacquer with a honey-like consistency.

maki-e, a technique stemming from the art of urushi, consists of sprinkling the lacquer with gold dust in order to create or accentuate a motif. The dust, applied using bamboo tubes or tiny natural bristle brushes, traces exquisitely fine lines. This art requires skill and a degree of meticulous care acquired only by a handful of urushi masters after years of assiduous practice.

A work of art such this dial could not be better served than by the refinement of the LUC XP, a elegant ultra-thin timepiece measuring 39.5 mm in diameter and a mere 6.8 mm thick.

It is a symbol of Chopard’s horological mastery as it is one of few manufactures capable of producing a mechanical self-winding calibre equipped with twin barrels ensuring a 65-hour power reserve.

The watchmakers of the manufacture in Fleurier have achieved this feat by means of an off-centred micro-rotor. The latter, instead of topping the movement in order to rewind it, is integrated into its overall thickness so as to keep the ensemble slim and ensure smooth and practical winding.

Entirely hand-decorated by Chopard’s artisans, the LUC Calibre 96.17-L may be admired through the transparent sapphire case-back.

The case comes in a choice of 18-carat rose gold or white gold. Fitted with a black alligator leather strap, the LUC XP Urushi Year of the Goat is delivered in a special presentation box, decorated to urushi techniques.

Black on the outside and adorned with maki-e on the inside, it is shaped like an octagon, the oriental symbol of joyfulness.

Meanwhile, the Imperiale watch is now adorned in jade to mark the Chinese New Year.

Born in the 1990s and entirely revisited in 2010, the Imperiale exudes an appeal stemming first and foremost from its harmonious proportions and refined details. Endowed with a powerful and symbolic character, it asserts itself as the natural choice for women impelled by an all-conquering spirit, says Chopard.

The serene strength of its details distils a wealth of characteristics that are all nods to the heyday of the imperial age, from the Roman numerals that punctuate the dial to the hands whose curves echo the tapered daggers used by sovereigns during battle.

This new model sees the appearance of jade, the ultimate symbol of imperial dynasties. By definition extremely fragile and complex to work with, a vividly coloured jade of exceptional quality enhances the dial with its gleaming radiance.

A crown delicately curved like a lotus flower and set with diamonds is fitted on the case’s middle with its pure, sleek sides designed to give the model a lighter touch and a more luminous glow. The shape of the lugs echoes the tradition of ancient columns that are famed for their perfectly balanced proportions.

The sheer wealth and finesse of its details make the Imperiale collection an eminently feminine model, and its timeless chic revives the spirit and the splendour of imperial classicism.

Chopard is a family business with a strongly ingrained philosophy of independence. The steps involved in making LUC watches are all performed in-house at the group’s Meyrin production sites. 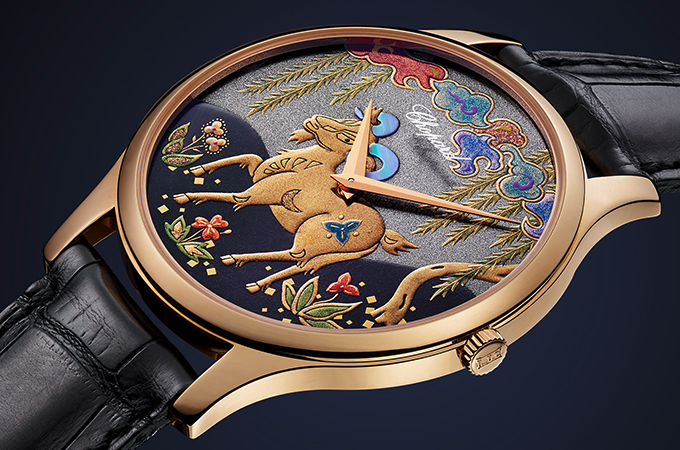 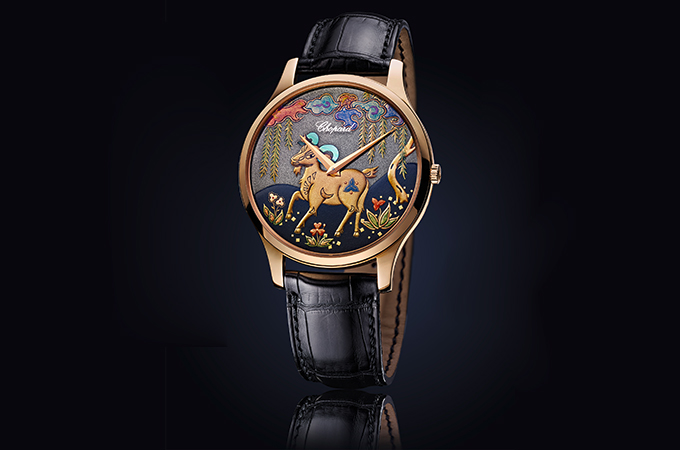 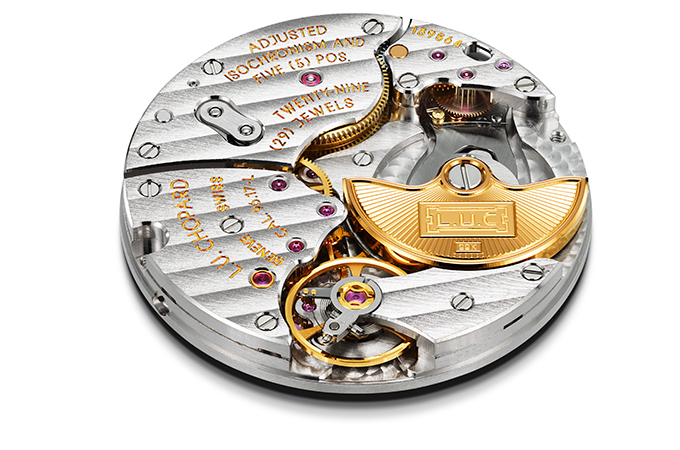 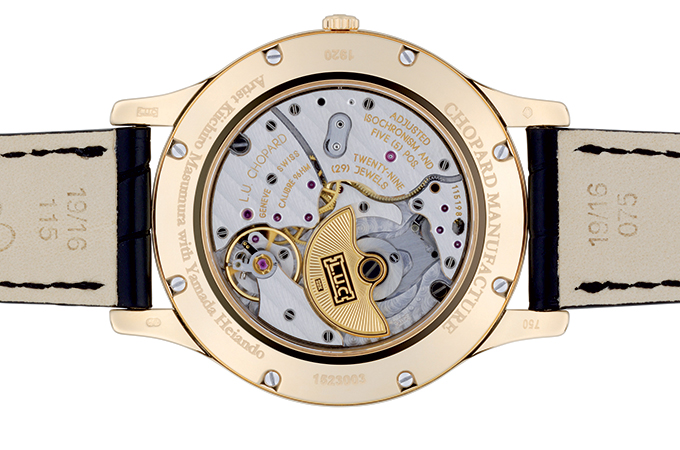 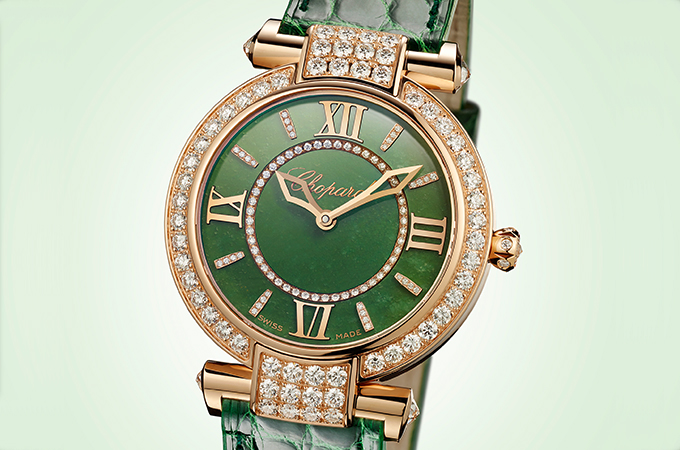 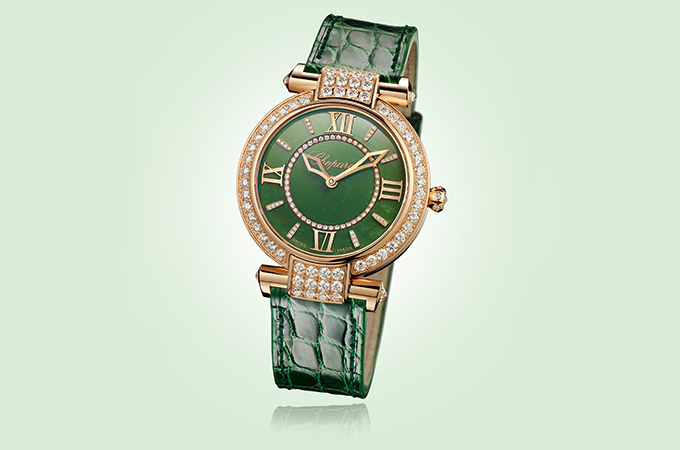