High flying shoppers at Heathrow can now buy their favourite Louis Vuitton bags to pack their duty free purchases in, following the launch of a new Louis Vuitton store at the UK airport.

Located at Heathrow Terminal 5, the 301-sq-m store is dedicated to Louis Vuitton’s travel heritage and welcomes the modern explorer to journey through an entirely new retail concept.

“With imminent journeys come a unique frame of mind; a feeling of excitement and the surprise of discovery, not only of foreign faraway lands but long before take off, a retail destination which offers an engaging shopping experience,” says a spokesman for the French luxury brand.  The store’s opening coincides with the arrival of Louis Vuitton’s Cruise 2015 collection, which was presented in Monaco, at Place du Palais by Nicolas Ghesquiere.

“Aquatic motifs abound, from cut out ‘portholes’ on navy sweaters to maritime flares to the rich embroideries depicting coral branches, this is a collection that calls to mind the Cote d’Azur, perfectly in tune with the house’s legendary roots in the art of travel,” he says.

The Heathrow store is flanked by an articulated series of metallic striped glass ‘fins’ finished in bronzed anodized aluminium. On the entire perimeter of the façade are a sequence of hanging transparent units hung by Louis Vuitton belts, recalling the artisan heritage of the maison, and allowing visibility straight into the store.

Inside, a considered open space makes the store’s offering of leather goods, women’s ready to wear and shoes, accessories, sunglasses, fine jewellery and watches easy to navigate. Look up to see 80 per cent of ceiling surface crafted from suspended aluminium blades ranging from a gold oak brushed veneer to others clad in hand crafted bronze and gold wallpaper. A feeling of warmth is felt throughout, communicated by sumptuous beige leathers, polished plaster in light gold, smoked teakwood and antique brass metalwork.

Always faithful to its heritage and commitment to fine craftsmanship, Louis Vuitton is renowned for its enduring relationships with artists and designers, from Richard Prince to Takashi Murakami to Charlotte Perriand and Yayoi Kusuma.

This store is no exception. The exterior will boast a mesmerising installation by Ange Leccia, the contemporary French painter, photographer and filmmaker whose renowned works are exhibited in international galleries and museums, from the Centre Georges Pompidou in Paris to the Gugghenheim Museum in New York – and now, inside Louis Vuitton Terminal 5.  A short film, Giraglia, will be presented on a digital screen set within the impressive 6-m façade of the store. The film follows a natural pattern: the Mediterranean Sea. The artwork presents a hypnotic maritime rhythm, an aquatic landscape of incessant swaying of coming and going. This quiet flow provokes thoughts of existence and of nature’s pulsations, and, of course, it neatly chimes with the idea of a voyage, travelling across oceans to adventures new, Louis Vuitton adds. 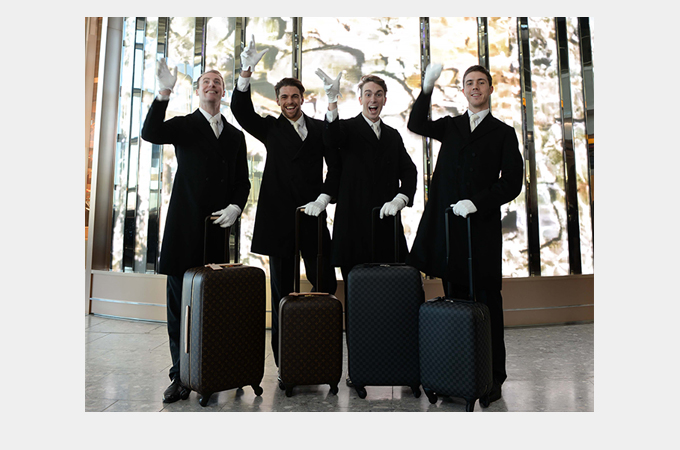