Motoring
New BMW M5 the most powerful yet

The 2018 BMW M5 saloon, billed as the fastest and most powerful M5 ever, goes on sale next February.

The sixth generation of the saloon comes equipped with an enhanced V8 engine, a new all-wheel drive system known as M xDrive and performance that surpass all previous incarnations, according to the German luxury carmaker.

Key to its heightened performance is the introduction of M xDrive and its adaptability thanks to a central control module and the variety of different dynamic modes that can be selected.

When first started, the car is in four-wheel-drive mode with the Dynamic Stability Control (DSC) switched on. But it comes with various driving dynamics modes, up to a track-friendly pure rear-wheel drive without DSC.

Power comes from the latest 4.4-litre V8 engine with BMW M TwinPower Turbo technology. It delivers a maximum torque of 750Nm, accelerating the new M5 from zero to 62 mph in just 3.4 seconds, making it the fastest M5 yet. Power is transferred to the road via a new eight-speed M Steptronic transmission with Drivelogic.

All of this performance is wrapped in a design that adheres to the form follows function mantra of all BMWs. The front design serves to splice the oncoming air in the most aerodynamic fashion while at the same time providing the breathing and cooling requirements for a 600 hp engine and its braking system, and the downforce required of a high performance saloon.

The 4.4-litre V8 M TwinPower Turbo develops a maximum torque of 750 Nm, a 70N m increase over the previous M5.

The engine characteristics can be changed by pushing the Drive Performance from the basic setting ‘Efficient’ to ‘Sport’ and ‘Sport Plus’, both of which provide a faster response.

BMW’s M engineers have developed new turbochargers and a higher injection pressure of up to 350 bar. This allows shorter injection times and better fuel atomisation, making it both faster and more efficient.

Improved lubrication and cooling systems include an oil pan with a small front silencer and an indirect charge air cooler, which is more powerful than its predecessor, despite its smaller size.

The exhaust manifolds have also been modified to ensure the best transfer of exhaust gas energy into the two turbochargers. Through the use of a resonator between the two rear silencers, the M engineers have also reduced the car’s mass. The exhaust note is flap-controlled and is influenced by the different driving modes to enhance the driving experience further.

An M Sound Control button allows the driver to reduce noise levels at the push of a button.

The new M xDrive all-wheel drive system brings the front wheels into play only when the rear wheels reach their limits of adhesion.

The main components of M xDrive are based on the intelligent all-wheel drive BMW xDrive system and Active M differential, controlled by a central M-specific vehicle dynamics control system

The Active M differential splits distribution of the drive between the rear wheels.

With M xDrive, the DSC intervenes only when necessary in extreme situations, so that the high engine power can be converted almost without power loss.

The rear-wheel-drive 2WD mode is designed for track use and is dedicated entirely to pure driving pleasure without restrictive control systems.

It allows fully automatic shifting in “D” mode and sequential switching in “S” mode. This is possible both with the new short gear selection switch on the centre console as well as via M-shift paddles on the steering wheel.

BMW’s M engineers made great driving dynamics and the best possible stability their goal in the chassis development of the new M5.

The electromechanical M Servotronic steering system provides the right steering torque for every driving situation. The new M5 has incredible turn-in, coupled to excellent steering feedback, yet in city and short-distance traffic it adapts to offer low steering forces during manoeuvring and parking.

The double crossbar axle, seen on the BMW 5 Series Saloon, was significantly revised for use in the M5.

The rear axle has an elastomer bearing, specially developed for the M5. An additional steel cross strut and an aluminium cross brace increase the stiffness of the rear axle and improve its response.

Also not visible from the outside, but still critical to the car’s handling, are other bodywork measures. For example, a domed aluminium front panel reinforces the front of the vehicle as well as the two front struts.

Brake pads have been developed using a special compound, characterised by significantly lower weight compared to conventional cast iron brakes. At the front and rear, perforated and internally ventilated brake discs are mounted within blue-painted six-piston callipers with a distinctive M logo designation.

M Carbon ceramic brakes are also available as an option.

The redesigned front bumper with its enlarged air openings has the task of supplying the cooling systems and brakes with sufficient cooling even in race track applications. The track width is greater than the car’s predecessor, and the front wings are aluminium for weight reduction.

The bonnet is also made of aluminium, while the roof consists of a very light and stable carbon fibre reinforced plastic (CFRP) - the first in a M5.

The rear diffuser was also redesigned, while the M-specific rear apron and the M rear spoiler, coupled to purposeful sill panels, all enhance the sporty and powerful appearance of the M5.

The interior focuses entirely on the driver but at the same time offers space for up to four passengers, a large boot and high levels of comfort akin to those of the 5-Series saloon.

The M5 enjoys tremendous levels of standard equipment, all geared towards driving dynamics. The focal point is the driver's seat, from which all switches and buttons can be operated in an ergonomically designed way.

All vehicle functions are located directly in the driver's field of vision. The large digital display from the BMW 5-Series was reconfigured specifically for M. It informs the driver about dynamic modes, the all-wheel drive M xDrive and the Drivelogic setting.

Almost all of the dynamics systems can be configured via the central touch- screen display, centre console button and M-Sport steering wheel. The central information display also has a gesture control.

The M5 is now started with a red start button, marking out its sporting intentions, while two red buttons M1 and M2 next to the shift paddles on the steering wheel control the driving settings, including xDrive and DSC, as well as engine, transmission, damper and steering characteristics, plus the head-up display.

The saloon is available in a variety of colours. A brand new shade is Marina Bay blue metallic. Also available on request are matt colours such as Frozen Dark Silver or Frozen Arctic Grey. 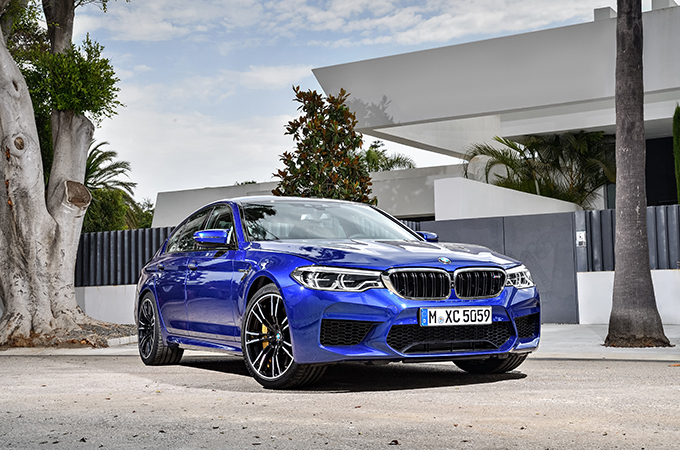 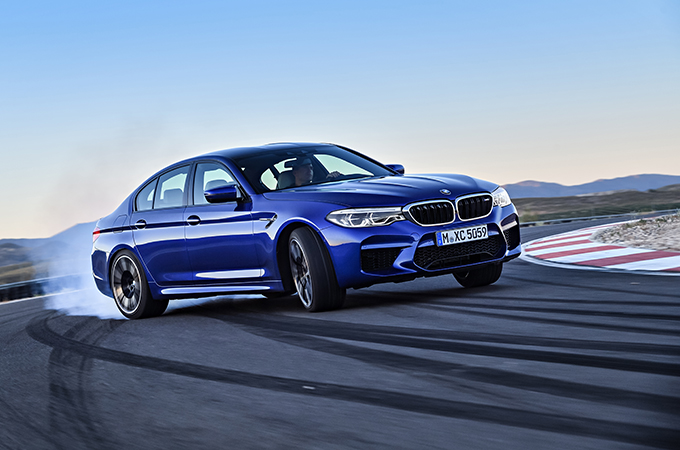 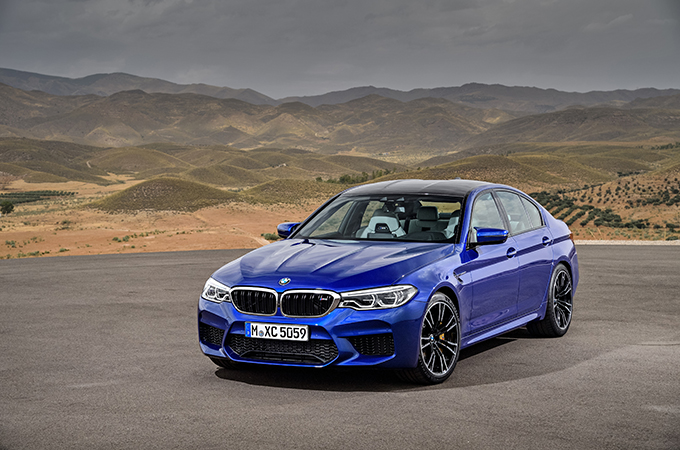 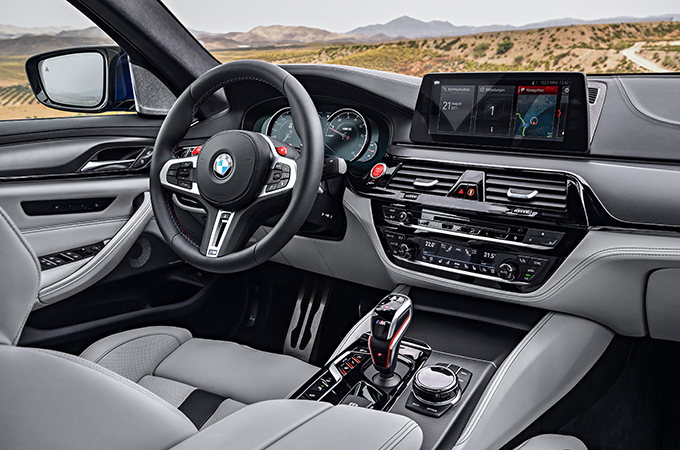 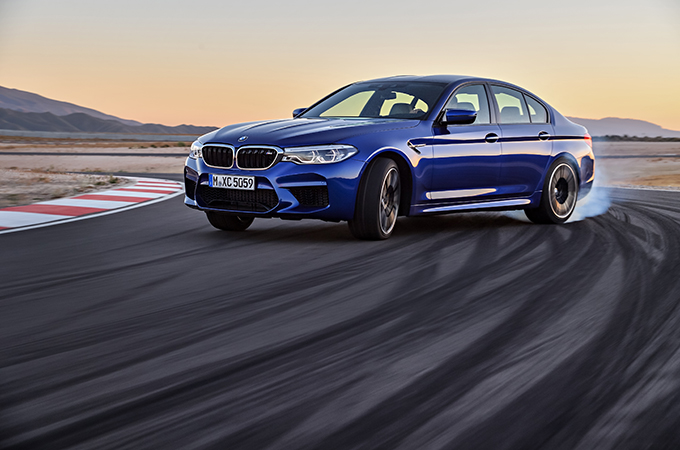 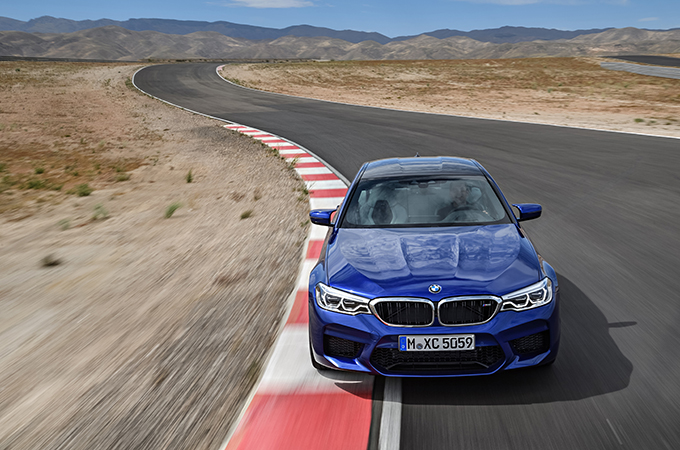 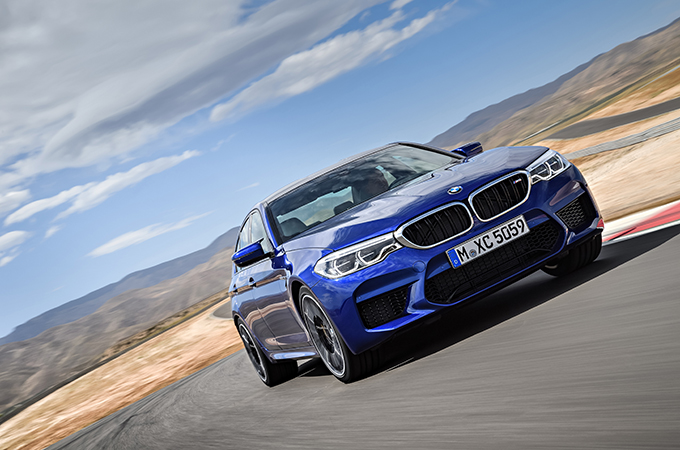 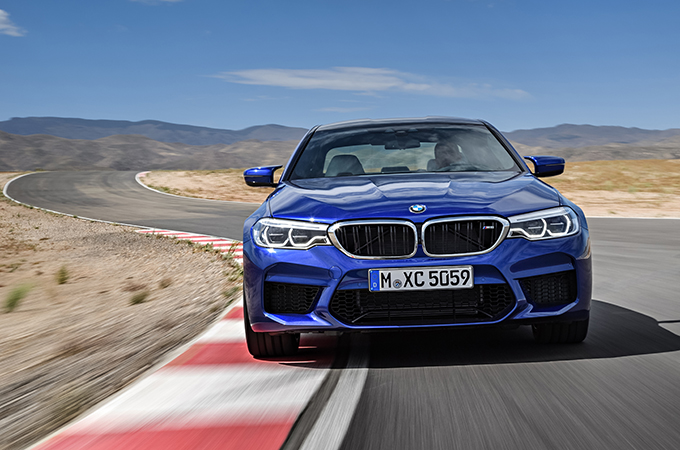