The growing popularity of green bonds will be in the spotlight at a prestigious financial conference in Edinburgh next month.

Now in its second edition, the 2017 Global Ethical Finance Forum (GEFF) will be held on September 13 and 14 at the Royal Bank of Scotland (RBS)’s conference centre in the Scottish capital.

It is being held under the theme Ethical Finance: Merging Profit & Purpose and is expected to attract more than 300 ethical finance experts.

One of its partners is the Bahrain Economic Development Board (EDB).

GEFF’s focus on green bonds comes as alarm bells continue to sound over global warming and more and more countries seek cleaner energy sources like solar power, according to Middle East Global Advisors, the organiser of the forum.

The National Oceanic and Atmospheric Administration (NOAA) and the National Aeronautics and Space Administration (Nasa) reported that 2016 was the hottest year on record, with the global sea ice cover at a record low and carbon dioxide levels passing the 400 ppm threshold, highlighting grim ramifications for the planet, it points out.

To keep the global temperature increase below 2 deg C and adapt to the impact of climate change, an urgent shift towards a more sustainable economy is the need of the hour, it says.

They bonds came into prominence in 2007 when they were launched by development banks such as the European Development Bank and World Bank. Since then, the appetite for green bonds has grown with the past four years proving to be a key period in the rapid development of the market, the organiser says.

While green bonds are most suited for long-term projects, they could also be used an instruments to steer capital for urgent environmental transitions. Preliminary estimates for green bond issuance in 2017 by HSBC, Moody’s & Climate Bonds Initiative are all in excess of $100 billion, signifying the massive opportunity this sector harbours, it says.

Interestingly, the green bond market has grown at an impressive 50 per cent compound growth rate, from close to zero at its inception in 2007 to $91 billion in 2015. However, this statistic still represents less than 0.1 per cent of the total global market for debt securities, it says, quoting a KPMG report.

However, despite the significant opportunities that lie in green financing, the sector faces a number of key obstacles. These include an extremely diversified market making it complicated to develop standards effectively, the mindset of bond issuers whereby they believe that meeting such standards could lead to additional costs and treating the relevant expertise, additional monitoring and reporting needed in such cases as a big burden, it says.

Another key instrument is green sukuk or shari’ah-compliant investments in renewable energy and other environmental assets which also address the shari’ah concern for protecting the environment. Proceeds from green sukuk are used to finance construction, to refinance construction debt, or to finance the payment of a government-granted green subsidy.

While there are significant opportunities for green sukuk in the solar energy plans of Gulf countries, there is however, a shortage of product. As per the Climate Bonds Initiative, an estimated 25-40 per cent of institutional investors’ assets under management are dedicated to fixed-income debt, including asset-backed securities.

The sukuk market is most suitable channel for the growing global pool of Shari’ah-compliant capital to fund renewable energy and climate change projects, it points out.

The GEFF 2017 session will focus on how green bonds and sukuk can go mainstream and look in-depth at decarbonising portfolios, the recent Paris climate change agreement, the investor pool for green sukuk in OIC & OECD markets, and challenges unique to green bonds and sukuk while delving into country-specific case studies.

A key issue that will be taken into account are the opportunities for green bond in the solar energy plans in the Gulf.

GEFF is organised by Middle East Global Advisors in partnership with the Islamic Finance Council UK (UKIFC), held under the patronage of the Scottish Government, and supported by the UK Government. 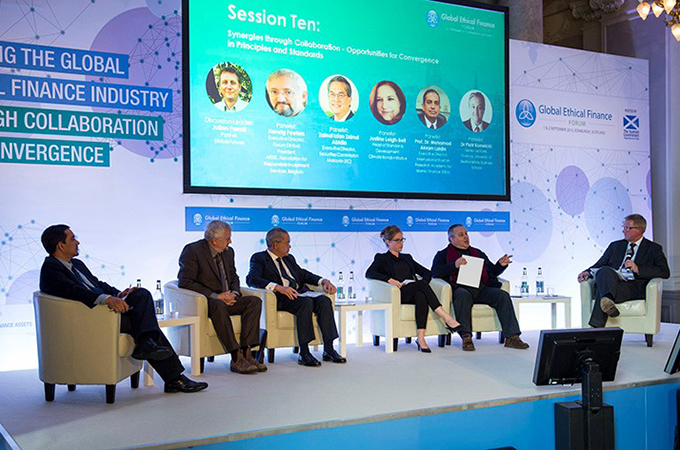