Art & Auctions
By George! Thanksgiving Proclamation worth millions is sold

An historic Thanksgiving Proclamation from George Washington, the first President of the US, has been sold to a private collector.

The only other known copy of Washington’s first Thanksgiving Proclamation resides in The Library of Congress.

This rare document, which was exhibited at Keno Auctions townhouse in New York, was offered at Private Treaty sale for $8.4 million.

The buyer requested that his identity and the final selling price remain confidential.

“It is a great pleasure to have handled this extraordinary document establishing a uniquely American celebration,” said Seth Kaller, an expert in acquiring, authenticating, and appraising rare historic documents who was involved with the sale.

“The new owner has agreed to share it with the public at an appropriate American cultural institution,” he added.

Leigh Keno, the founder of Leigh Keno American Antiques and Keno Auction, said: “It has been a great honour to have exhibited this iconic manuscript. The fact that it sold to a collector who believes in sharing with the public is the icing on the cake.”

In the Proclamation, issued on October 3, 1789, Washington designates “Thursday the 26th day of November next to be devoted by the People of these States to the service of that great and glorious Being . . . That we may then all unite in rendering unto him our sincere and humble thanks-for . . . the peaceable and rational manner in which we have been enabled to establish constitutions of government for our safety and happiness... for the civil and religious liberty with which we are blessed; and the means we have of acquiring and diffusing useful knowledge”.

On October 3, 1863, exactly 74 years after Washington’s Proclamation, Abraham Lincoln, the 16th President of the US, established the fourth Thursday in November as a national day of Thanksgiving, setting the precedent that remains to this day.

While the Proclamation will depart Keno Auctions Townhouse, the exhibition and sale of documents has been extended until December 5 and includes two important original documents:

A rare July 1776 broadside printing of the Declaration of Independence, attributed to a printer in Exeter, New Hampshire, priced at $1.2 million.

A highly personal letter handwritten and signed by George Washington in 1782, priced at $98,000. 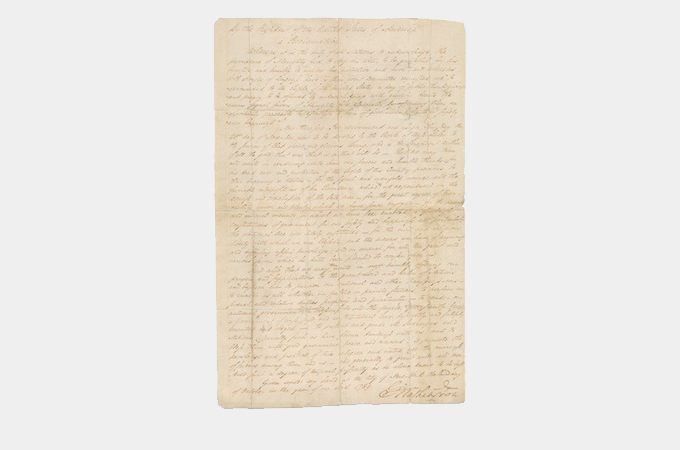