A rare red ruby sold for a record $8.6 million at Sotheby’s sale of Magnificent and Noble Jewels in Geneva, Switzerland.

The 8.62-carat cushion-shaped gemstone from the collection of Dimitri Mavrommatis soared above estimate and set a world auction record for a ruby at CHF8.28 million ($8.6 million), as well as a record price per carat for a ruby at $997,727.

The buyer, unsurprisingly, was none other jeweller Laurence Graff, who had first acquired it at a sale eight years ago and gave the ruby its name, before selling it to the Greek financier.

This spectacular gemstone displays the coveted “pigeon blood” red associated with the finest rubies from Mogok in Burma, arguably the rarest of all gemstones.

Another highlight of the evening was a natural pearl and diamond necklace formerly in the collection of Joséphine de Beauharnais, Queen of Sweden and Norway (1807-1876).

The necklace is believed to have once been owned by Joséphine de Beauharnais (1763-1814), the first wife of Napoleon Bonaparte and Empress of France.

The November 12 sale saw exceptional prices for fine diamonds, coloured gemstones and jewels signed by the world’s greatest makers, which brought the sale’s total to an outstanding CHF 91.77 million ($95.27 million).

David Bennett, Chairman of Sotheby’s Switzerland and of the Jewellery Department for Europe and the Middle East, said: “The Graff Ruby is quite simply the greatest ruby of its size I have ever seen. The record price is also a tribute to the discerning eye of Dimitri Mavrommatis and his intense passion for beauty in all its forms.”

Laurence Graff said: “Graff deals in the finest gemstones in the world and this is the finest ruby in the world. We are very proud to have it in our possession for the second time.”

At the heart of the sale was an ensemble of rare gemstones and beautiful jewels from the Mavrommatis Collection.

In addition to the Graff Ruby, the offering included a rare 27.54 carat step-cut Kashmir sapphire which exhibited a rich, saturated velvety blue colour and achieved CHF5.76 million ($5,98 million), a world auction record for a Kashmir sapphire.

Testament to the collector’s educated eye were also several beautiful creations by two of the most respected contemporary jewelers, Graff and JAR. JAR, the leading art jeweler of the last 50 years and an unrivalled master of colour was represented by a pair of superb sapphire, ruby and diamond earrings which sold for CHF557,000 ($578,205).

The auction also confirmed the strong demand for jewels of noble provenance and great historical importance among international collectors. In addition to Joséphine de Beauharnais’s necklace, the sale featured The “English Rose” diamond pendant, circa 1876, once the property of Queen Victoria of Great Britain, which made CHF68,750 ($71,367), above the estimate of CHF50,000-70,000/$52,000-73,000. 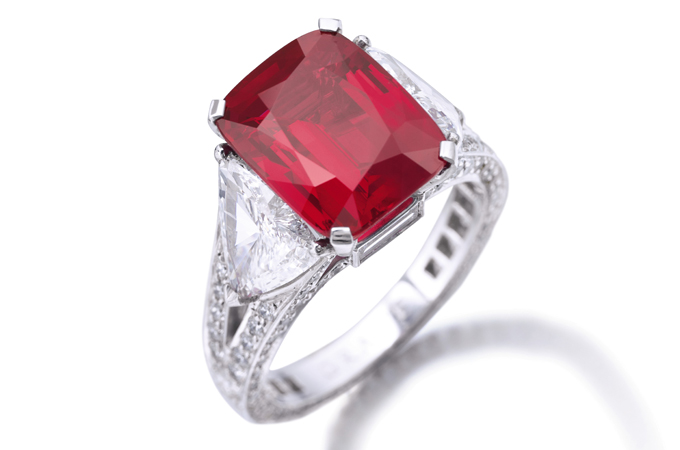