More than a thousand fans have already given McLaren’s new Sports Series the thumbs up on Facebook following yesterday’s launch of a social media blitz about its latest sports car.

Previously known as the P13, the entry-level Sports Series will be the third model to join the McLaren Automotive line-up.

It will, says McLaren, offer the driving experience and engagement all models that have worn the McLaren Speedmark over the past five decades are famous for.

Likening the new car to the discovery of black swans in the 17th century - which forever changed the belief that all swans are white – McLaren says the Sports Series will “challenge the accepted norm, deviating from what has gone before it, setting new benchmarks in the process”.

To reflect this, the launch campaign will plot the history of game-changing or ‘Back Swan’ moments from throughout history.

Over the coming weeks, McLaren Automotive will be using the hashtag #BlackSwanMoments through social media “to identify and uncover a range of discoveries and moments that have truly changed and challenged people’s beliefs”.

McLaren says the Sports Series will be very much a ‘pure’ McLaren, building on the strengths and learnings of the other models in the range, and embodying the core McLaren values.

Like the McLaren P1 and 650S alongside it, the Sports Series will provide class-leading driver engagement levels, and transfer Formula 1 technologies and know-how to a new segment, it adds.

It will have a carbon-fibre chassis and mid-mounted V8 engine.

Following the company’s global launch in 2010, McLaren launched the 12C and 12C Spider and followed this in 2013 with the limited-run McLaren P1. In keeping with its plan to introduce a new model each year, the company recently unveiled the 650S Coupe and 650S Spider. The brand continues to expand, operating through a global network of retailers. 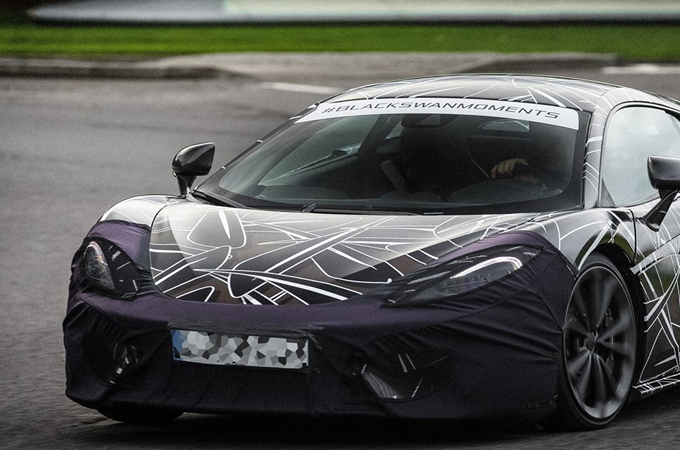