Swiss manufacture Zenith has unveiled what it calls the “ultimate sports watch” to commemorate its association with a top sailing team which is making waves across the world.

Based in France, Spindrift is a top yachting team dedicated to multihull racing. Founded in 2011 by  businesswoman Dona Bertarelli and veteran sailor Yann Guichard, Spindrift has three boats including the D35 Ladycat, the MOD70 Spindrift trimaran and the Spindrift 2 maxi-trimaran.

A trimaran is a multihull boat that comprises a main hull and two smaller outrigger hulls which are attached to the main hull with lateral beam.

This month, the team is hoping to help set a new record at a famous transatlantic race.

Zenith says it partnered with the team because Spindrift “epitomizes its spirit of adventure”.

“Our association with Spindrift racing is a logical step in the development of Zenith, which has been achieving steadily growing success over the past five years. Through this highly technological project, we clearly express our philosophy of looking higher and further, as well as that of the people who wear our watches. We enjoy focusing on projects and characters who make things happen. Dona, Yann and their teams have the stuff of those modern heroes who drive dreams and make the world go round. We are proud to associate our watches with their future performances,” says Zenith President and CEO Aldo Magada.

Designed to beat the most formidable crewed ocean records, maxi trimaran Spindrift 2 has already set 10 records around the world since its launch, including the Trophée Jules Verne.

Tomorrow (November 2), she will cross the start line of the Route du Rhum, the legendary solo transatlantic race that takes place every four years between Saint-Malo (mainland France) and Pointe-à-Pitre (Guadeloupe).

In its capacity as official timekeeper for the Spindrift team, notably during the 2014 Route du Rhum, Zenith says it was quite natural to enrich its El Primero line with a timepiece equipped with a chronograph function in tribute to this “exceptional human adventure”.

The understated yet technical dial of the El Primero Stratos Spindrift racing has two particularities. The first is the opening onto the escapement at 10 o’clock, making this watch the first Stratos to be equipped with this feature. The owner can thus admire the heart of his watch. The second characteristic lies on the inside face of the inner bezel ring bearing the inscription “Spindrift racing” at 12 o’clock. It consists of the telemetric scale serving to calculate the distance of a visible and audible phenomenon. The inscription and the team logo engraved on the oscillating weight bring to mind the connection between this top of the range sports watch and the forthcoming sailing challenges both on Lake Léman and on the oceans around the globe.

The automatic El Primero 4061 is equipped with a lever and escape-wheel in silicon, an avant-garde material that has resolved problems relating to lubrication. Silicon is much harder and lighter than steel, which makes it both resistant to wear and tear and less energy intensive, due to its low friction coefficient. It is also non-magnetic.

Equipped with a column wheel, this highly precise movement is fitted inside a case equipped with a rotating bezel and available in two different two-tone options – rose gold and DLC titanium, enhanced with a black dial – or completely black – the DLC variation with a carbon fibre dial. These two resolutely masculine versions are coated in DLC (diamond-like carbon), giving the watch its spectacular matt black colour as well as considerable hardness and resistance to scratches.

The flexibility of the strap stems from its design: a rubber core into which a thick, structured fibre fabric is inserted. The result: robustness, comfort and a firm hold suited to all situations and particularly sailing sports.

Founded in Le Locle in 1865 by a watchmaker Georges Favre-Jacot, Zenith has won 2,333 chronometry prizes in a century-and-a-half of existence.

Its legendary El Primero caliber, an integrated automatic column-wheel chronograph movement launched in 1969, is endowed with a high frequency of 36,000 vibrations per hour that ensures short-time measurements accurate to the nearest 1/10th of a second.

Zenith manufacture has since developed over 600 movement variations. 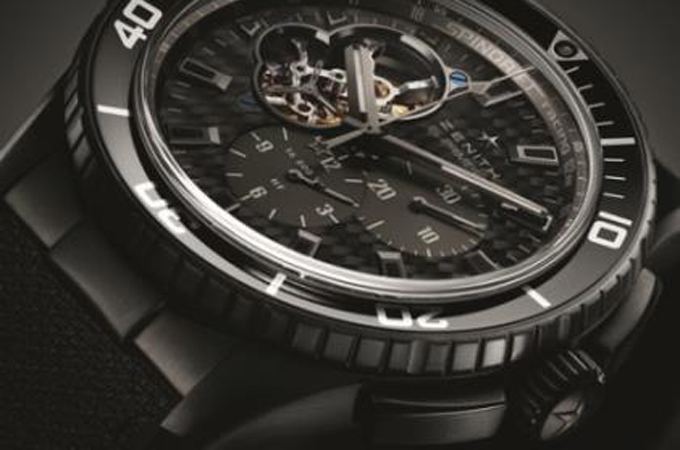 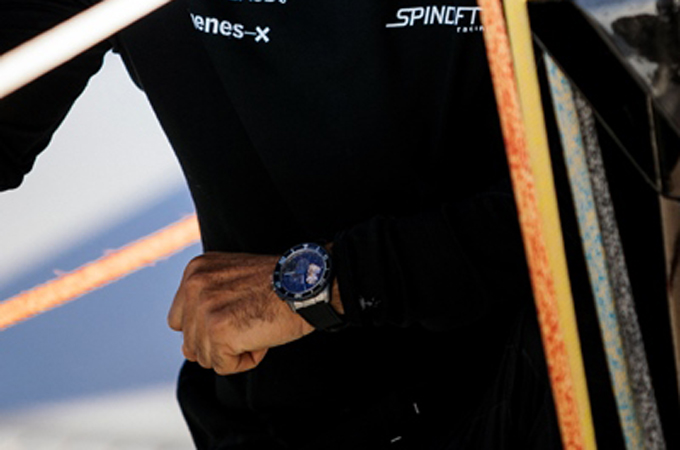 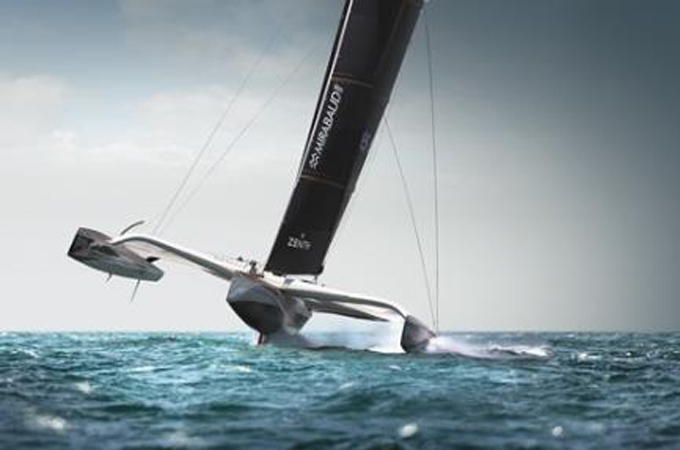