With its pristine surrounds and five-star service, the Bay La Sun Hotel & Marina at King Abdullah Economic City is positioning itself as a green destination of choice for both Saudi and international visitors

The history of the flagship Bay La Sun Hotel & Marina at King Abdullah Economic City (KAEC) reflects both the ambitions of its operator, Al Khozama Management Company, as well as the wider development of the hospitality sector in Saudi Arabia in general and the KAEC in particular, a key driver for the continuing economic transformation and diversification of the kingdom’s economy.

The prime location of the property close to the Red Sea is a master-planner’s dream made real. To its west lies a fabulous coastline fringed by fine yellow sand and to its east a natural lagoon, salt marshes and mangroves.

With KAEC located 100 km north of Jeddah, Bay La Sun is a relaxing 70-minute drive from the Saudi commercial hub along the main coastal highway northwards, almost akin to the Saudi riviera. One later passes the ultra-modern King Abdullah University for Science and Technology (KAUST) close to the south of the new city and northwards one can continue to Rabigh, Yanbu and Jordan.

Acknowledged as the world’s northernmost tropical sea, the Red Sea boasts a biologically diverse and precious living habitat with varied species of fish and marine life, and extensive coral reefs and shallow shelves that extend along its coastline.

The Red Sea’s coastal and marine littoral and its spectacular pristine waters is unparalleled as a rich and diverse ecosystem, making lifestyle and tourism development a natural and compelling vision and positioning it as an embryonic new destination for diving enthusiasts.

When the Haramain Railway is commissioned early next year, the cities of Makkah, Madinah and Jeddah with their combined population of 12 million will be connected with KAEC, which will then be a mere 24-minute rail journey away from the King Abdulaziz International Airport in Jeddah.

KAEC is almost at the epicentre of urban growth cascading through the Western Province with new roads, railways and sea ports under development.

Bay La Sun opened its doors in 2013 under the management of Al Khozama Management Company and has quickly set a standard as the ideal business and social venue with real style in the new city. Al Khozama has long built its reputation for hospitality across Saudi Arabia with a proven and undisputed tradition of creating superb guest experiences.

The stunning property is flanked by parks, greenery and delightful pathways with a host of recreational opportunities, and the Red Sea literally a short walk away.

Bay La Sun is also a district in its own right in the residential community of the new city with hospitality and an international business district close by, surrounded by leisure facilities including retail and restaurant outlets. There is a boardwalk on the coast as well as parks and gardens and open living spaces offering panoramic views of the marina and yacht club now being completed, with the indomitable Red Sea shimmering close by.

Hussein Ali Hatata, Vice President of Al Khozama’s hospitality division, is one of the architects of the company’s formidable reputation as a brand that excels in hospitality and creating lasting impressions through its operational flair, customer care, breadth of experience and continuous benchmarked training.

Over the past year, Al Khozama has taken a strategic position to manage all its various properties utilising its accumulated vast experience, as an integral part of the company’s long-term growth strategy.

Bay La Sun comprises 189 spacious deluxe rooms of 33 sq m each plus a further six suites. All rooms and suites have superior amenities, large 42-inch televisions and high-speed internet with the emphasis being on business and family visitors. All-day dining is available in the Seasons restaurant and there is an outdoor casual dining grill area. In addition, there are business lounges and the Corojo, the popular cigar lounge, with terraces overlooking the canal and marina.

Hailed as the travel industry’s equivalent to the Oscars, the World Travel Awards are considered as one of the most comprehensive and prestigious events in the global travel industry today. Each year the coveted awards attracts VIPs, senior tourism figures and international media, hitting a crescendo with the annual awards presentation ceremony.

“Our business propositions are increasing although it was tough at the beginning as we were building our reputation and value proposition,” says Bay La Sun General Manager Dr Nagy Arafat, pointing out that business is on the rise not just because of the new city’s expansion and growth but also as the development of Bay La Sun and the surrounding area is now complete, making it a destination in its own right, “thanks to the relentless support of our owners”.

“The city today is completely different to what it was three years ago when I came as pre-opening manager in March 2013,” he says.

Dr Arafat is a veteran of the hospitality sector with a doctorate in hotel and restaurant management and tourism, and a hotel management degree. His career extends over more than three decades and he has worked with Marriott, IHG and Radisson hotels in the US, Egypt and Saudi Arabia. Properties where he has served in top positions include the Marriott Riyadh, the Jeddah Marriott as well as the Crowne Plaza in Jeddah.

Dr Arafat is recording increasing interest in Bay La Sun Hotel & Marina from the business sector and tourism, which now constitutes about 20 per cent of occupancies.

The hotel is also benefiting from the demand in the Mice (meetings, incentives, conferences and exhibitions) sector with conferences, meetings and weddings on the rise.

“Bay La Sun is doing a great deal of convention and conference business as many corporates are looking at venues away from Jeddah,” he says. “These groups value the distance and the location of the new city and the separation so they can really concentrate and focus on their business. We are something of a retreat similar to destinations such as Sharm El Sheikh and Dubai but located in Saudi Arabia and easily accessible with our prime location.”

He continues: “We are winning business from Rabigh where the PetroRabigh refinery is based and our corporate customers now include KAUST, Emaar, the Economic Cities Authority (ECA) and Bechtel. More and more corporates are in the process of opening businesses in the new city including major names such as Pfizer and Mars, while several others are looking to invest in the area.”

The Bay La Sun’s top-class banqueting facilities include six multi-function meeting rooms, an executive board room, a 65-seat theatre and auditorium, a dedicated prayer room, and a 1,500-sq-m banquet hall and pre-function area with a separate entrance.

Elaborating on these facilities, Dr Arafat says the Bay La Sun can do it all – from the most discreet meetings to large social events.

“We can accommodate up to 800 people seated and host receptions for up to 1,200 people. This means we can also handle graduation ceremonies f or universities,” Dr Arafat says.

The opening of the Juman Garden Community Park, meanwhile, will encourage more leisure business to Bay La Sun over weekends and holidays as the recreational value proposition gets stronger, says Dr Arafat. 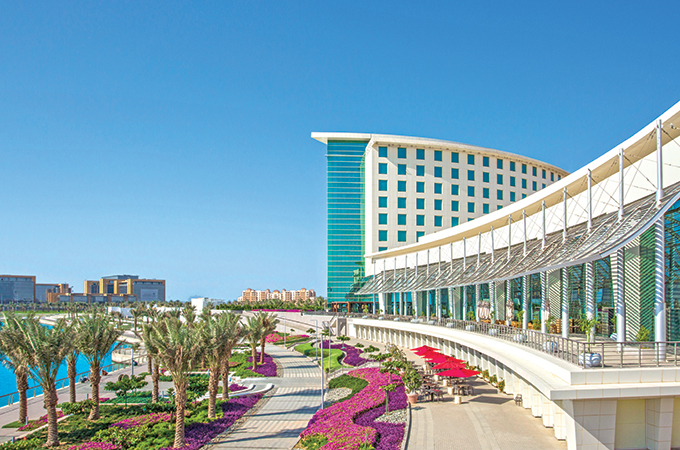 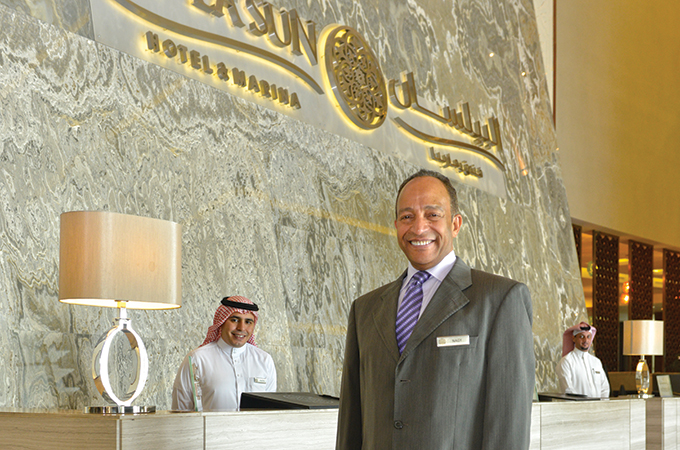 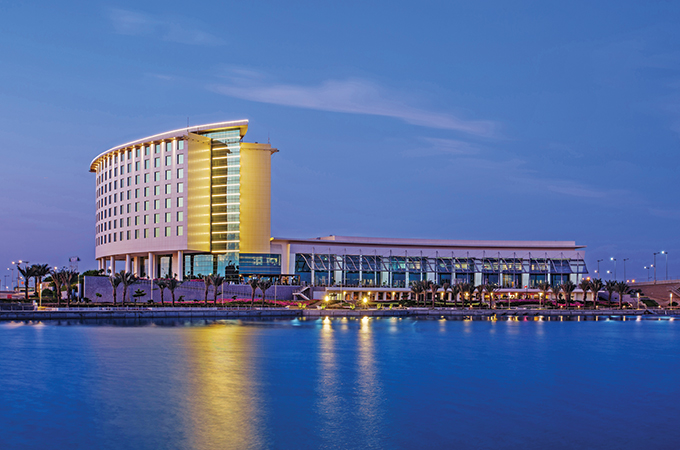 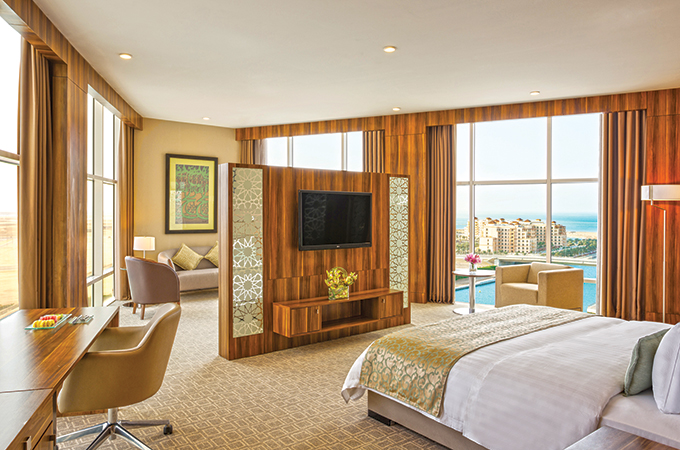 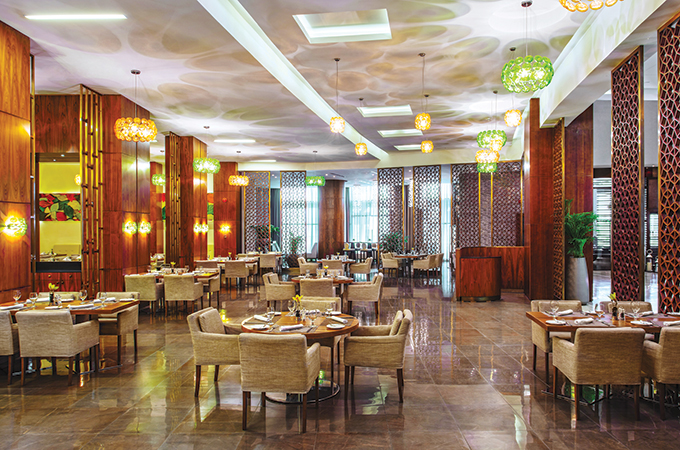 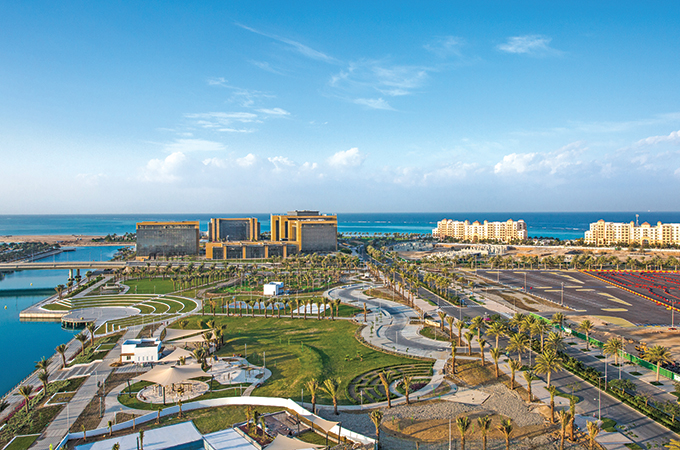 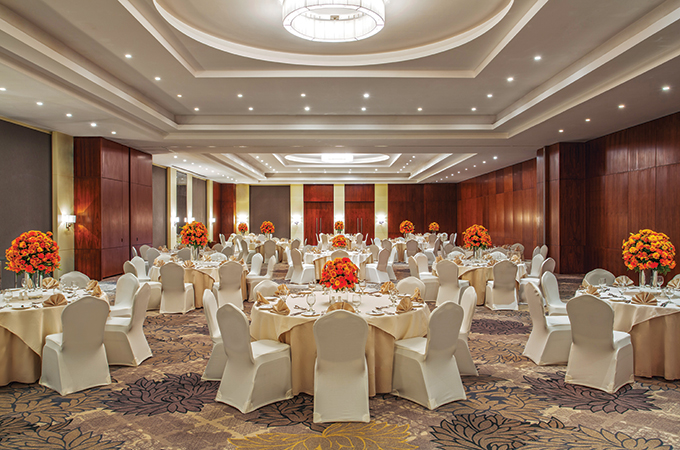 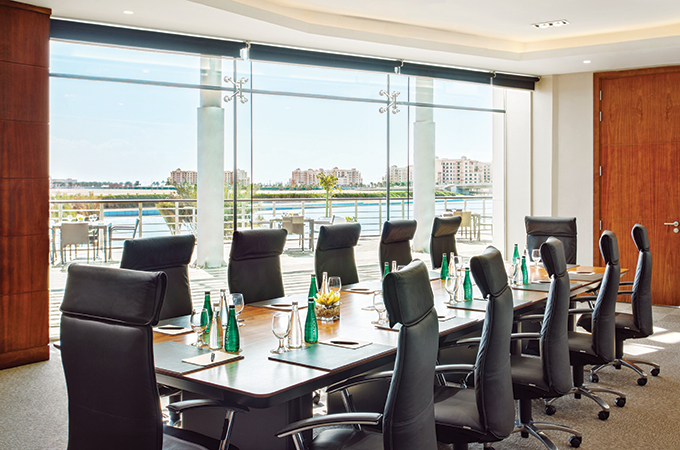