Daytona SP3, the Ferrari Icona unveiled today, takes its inspiration from the legendary 1-2-3 finish of Ferrari in 1967 and pays homage to the Ferrari sports prototypes that helped earn the marque its unparalleled motorsport status.

Presented at the Mugello Circuit during the 2021 Ferrari Finali Mondiali, Daytona SP3 is a limited edition that joins the Icona series which debuted in 2018 with the Ferrari Monza SP1 and SP2.

On February 6th 1967, Ferrari pulled off one of the most spectacular feats in its entire history when it took the top three places at the 24 Hours of Daytona in the first round of that year’s International World SportsCar Championship. The three cars that shot past the chequered flag in that legendary side-by-side finish on Ford’s home turf – in the first place a 330 P3/4, in second a 330 P4 and in third a 412 P – represented the pinnacle of development of the Ferrari 330 P3, a model that chief engineer Mauro Forghieri had significantly improved in each of the three racing car fundamentals: engine, chassis and aerodynamics. The 330 P3/4 perfectly encapsulated the spirit of the sports prototypes of the 1960s, a decade now considered the golden era of closed wheel racing and an enduring reference point for generations of engineers and designers.

The Daytona SP3’s design is a harmonious interplay of contrasts, sublimely sculptural, voluptuous surfaces alternating with the kind of sharper lines that revealed the burgeoning importance of aerodynamics in the design of racers such as the 330 P4, 350 Can-Am and 512 S. The bold choice of a ‘Targa’ body with a removable hardtop was also inspired by the sports prototype world: consequently, the Daytona SP3 not only delivers exhilarating driving pleasure but also usable performance.

The Daytona SP3 sports a naturally-aspirated V12, mid-rear-mounted in typical racing car style. Undisputedly the most iconic of all Maranello’s engines, this power unit delivers 840 cv – making it the most powerful engine ever built by Ferrari – along with 697 Nm of torque and maximum revs of 9500 rpm.

The chassis is built entirely from composite materials using Formula 1 technologies that have not been seen in a road car since the LaFerrari, Maranello’s last supercar. The seat is an integral part of the chassis to reduce weight and guarantee the driver a driving position similar to that of a competition car.

Lastly, just like the cars that inspired it, the aerodynamic research and design focused on achieving maximum efficiency purely using passive aero solutions. Thanks to unprecedented features, such as chimneys that extract low-pressure air from the underbody, the Daytona SP3 is the most aerodynamically efficient car ever built by Ferrari without resorting to active aero devices. Because of the clever integration of these technical innovations, the car can accelerate from zero to 100km/h in 2.85s and from zero to 200km/h in just 7.4s: exhilarating performance, an extreme set-up, and the intoxicating V12 soundtrack deliver completely unparalleled driving pleasure.

Although inspired by the stylistic language of 1960s racing cars, the Daytona SP3 is clothed in very undeniably original, modern forms. Its sculptural power celebrates and interprets the sensual volumes of sports prototypes to wholly contemporary effect. It goes without saying that a design this ambitious demanded a meticulously planned and executed strategy from Chief Design Officer Flavio Manzoni and his Styling Centre team.

From the wraparound windscreen back, the Daytona SP3’s cabin looks like a dome set into a sensual sculpture with sinuous wings emerging boldly either side. The car’s overall balance is underscored by monolithic volumes that are a powerful articulation of the long-appreciated skills of Italian coachbuilding at its finest. The fluidity of its masses melds effortlessly with sharper surfaces, to produce the sense of effortless aesthetic balance that has long been a signature of Maranello’s design history.

The front of the Daytona SP3 is dominated by two imposing wings that feature outer and inner crests: the latter dive into two air vents on the bonnet, making the wings look wider. The relationship between the perceived mass created by the outer crest and the aerodynamic role of the inner one underscores the way in which styling and technology are inextricably linked in this car. The front bumper has a generous central grille framed by two pillars and a series of stacked horizontal blades framed by the outer edge of the bumper. The headlight assemblies are characterised by an upper mobile panel that recalls the pop-up headlights of early supercars, a theme dear to Ferrari tradition that lends the car an aggressive, minimalist look. Two bumperettes, a reference to the aeroflicks featured on the 330 P4 and other sports prototypes, emerge from the outer edge of the headlights, adding a further expressiveness to the front of the car.

The rear bodywork highlights the powerful appearance of the wing by the repetition of the twin-crest theme and the aerodynamic vent that boosts its three-dimensional volume. The compact, tapered cockpit combines with the wings to create a powerful tail with a central backbone element inspired by the 330 P4. The naturally-aspirated V12, the living beating heart of the new Ferrari Icona, is revealed in all its glory at the end of this backbone.

A series of horizontal blades complete the rear, creating the impression of a light, radical, structured monolithic volume that lends the Daytona SP3 a look that is both futuristic and a nod to signatures from Ferrari’s DNA. The taillight assemblies are made up of a horizontal luminous bar beneath the spoiler and integrated into the first line of blades. The twin tailpipes are positioned centrally in the upper part of the diffuser, adding to its aggressive character and completing a design that visually broadens the car.

Even the Daytona SP3’s cockpit takes its inspiration from historic Ferraris such as the 330 P3/4, the 312 P and the 350 Can-Am. Starting with an idea of a high-performance chassis, the designers crafted a meticulously refined space that delivers the comfort and sophistication of a modern Grand Tourer whilst keeping the styling language quite minimalist. It retains the philosophy behind certain styling codes: the dash, for instance, is minimalist and functional yet also entirely contemporary in feel. The typical upholstered cushions that were directly attached to the chassis on sports prototypes have been transformed into modern seats integrated into the body, creating a seamless textural continuity with the surrounding trim.

Several exterior elements, including the windscreen, positively influenced the interior architecture. Seen from the side, the cut of the windscreen header rail creates a vertical plane that divides the cockpit in two, separating the functional area of the dashboard that hosts the instrumentation from the seating. This architecture neatly executes the difficult feat of being both extremely sporty and very elegant at the same time.

The Daytona SP3’s interior aims to guarantee both driver and passenger a snug driving environment by drawing on styling cues typical of competition cars. The main idea was to broaden the cabin visually by creating a clear break between the dash area and the two seats. The latter, in fact, are part of a seamless textural continuity, their trim extending all the way to the doors, reproducing the elegant functionality typical of sports prototypes. This same extension of the trim can also be seen on the sill area when the doors are open.

The dashboard follows the same philosophy: here the Daytona SP3’s structure means that the trim extends all the way to the quarterlights, hugging the entire area connecting with the windscreen. The slender, taut dashboard seems almost to float within the upholstery. Its styling theme develops on two levels: the upper trimmed shell, which has a clean, sculptural look, is separated from the lower one with a clear textural and functional dividing line. All of the Human-Machine Interface (HMI) touch controls are clustered below this line.

The seats are integrated into the chassis and thus have the ergonomic wraparound design typical of high-performance cars, but also the kind of meticulous detailing that sets them apart.

To give the Daytona SP3 the most exhilarating V12 on the market, Ferrari chose the 812 Competizione’s engine as its starting point, but relocated it to the mid-rear position to optimise the intake and exhaust layout as well as fluid-dynamic efficiency. The result is that the F140HC engine is the most powerful internal combustion engine ever built by Ferrari and deliver a massive 840 cv with the typical exhilarating power and sound of a Prancing Horse V12.

The engine has a 65° vee between its cylinder banks and retains the 6.5-litre capacity of its predecessor, the F140HB, sported by the 812 Competizione from which it inherits its upgrades. All the developments enhance the performance of a powertrain that sets the new benchmark for its category thanks to its astonishing soundtrack – obtained through targeted work on both the intake and exhaust lines – and the 7-speed gearbox, which is now even faster and more satisfying than ever thanks to the development of specific strategies.

Maximum revs of 9,500 rpm and a torque curve that rises rapidly all the way up to maximum revs gives occupants the feeling of boundless power and acceleration. Particular attention was lavished on reducing the engine’s weight and inertia by adopting titanium con rods, which are 40% lighter than steel, and the use of a different material for the pistons. The new piston pins have a Diamond-Like Carbon treatment (DLC), which reduces the coefficient of friction to improve performance and fuel consumption. The crankshaft has been rebalanced and is now also now 3% lighter. 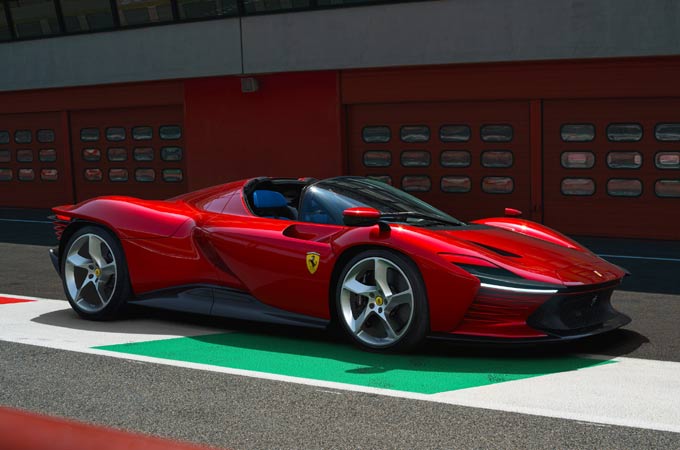 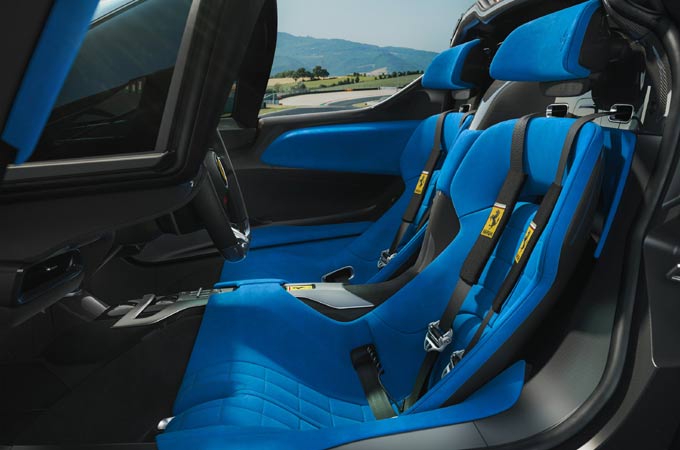 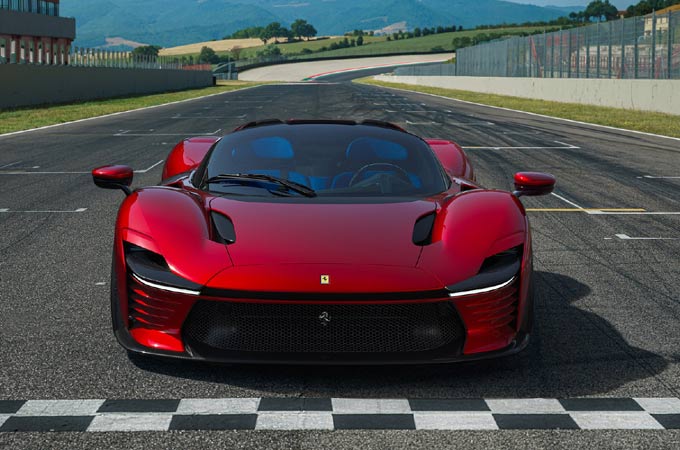