The EQS, the first all-electric luxury sedan from Mercedes-EQ, has marked its Middle East debut at the region’s biggest tech show, GITEX Global 2021.

With it, Mercedes-EQ is redefining the electric vehicle segment. The EQS is the first model to be based on the modular architecture for luxury and executive-class electric vehicles. Fusing technology, design, functionality and connectivity, the EQS delights both drivers and passengers, the company said.

As part of its Ambition 2039 initiative, Mercedes-Benz is working on offering a carbon-neutral new car fleet within 20 years from now. By as early as 2030, the company wants more than half the cars it sells to feature electric drive systems - this includes fully electric vehicles and plug-in hybrids, it said.

In many areas, Mercedes is already thinking about tomorrow: the new EQS is designed to be correspondingly sustainable. The vehicles are produced in a carbon-neutral manner, and resource-saving materials such as carpets made from recycled yarn are used.

“This is because Mercedes-Benz considers the entire value chain, from development and the supplier network to its own production. Mercedes-Benz AG has had its climate protection targets confirmed by the Science Based Targets Initiative (SBTI),” it said.

With a great deal of meticulous detailing and on the basis of the purpose design, the aerodynamicists, in close cooperation with the designers, were able to achieve a new cd best value of 0.20 . This makes the EQS the most aerodynamic production car in the world. The operating range particularly benefits from this. It is also among the best in terms of quiet running. The very low wind noise level contributes significantly to this.

With EQS 580 range of up to 702 km (WLTP) and an output of up to 385 kW the powertrain of the EQS also meets every expectation of a progressive sedan in the S-Class segment. The EQS 53 AMG 4MATIC is the performance version with up to 484kW and with DYNAMIC PLUS package, which is available as an option, the maximum output increases to up to 560 kW. All EQS models have an electric powertrain (eATS) at the rear axle, while the versions with 4MATIC also have an eATS at the front axle.

The EQS marks the launch of a new generation of batteries with significantly higher energy density. The larger of the two batteries has a usable energy content of 107.8 kWh. That is around 26 percent more than the EQC (EQC 400 4MATIC: combined electrical consumption: 21.5-20.1 kWh/100 km; CO2 emissions: 0 g/km) . The innovative battery management software, developed in-house, allows updates over the air (OTA). In this way, the energy management system remains up to date throughout the life cycle. In terms of the cell chemistry, the cobalt content of the cathodes has been reduced to ten percent.

The EQS can be charged with up to 200 kW at fast-charging stations with direct current. Power for up to another 300 km (WLTP) is recharged in just 15 minutes. The EQS can be conveniently charged with up to 22 kW with AC using the onboard charger, aside from various intelligent charging programs that can be activated automatically depending on the location, and functions such as particularly battery-saving charging.

Although the EQS is a close relative of the new S-Class, it is built on an all-electric architecture. This completely new concept made a rigorous Purpose Design possible: with its one-bow lines and cab-forward design with a fastback, the EQS is clearly distinguishable from vehicles with combustion engines even at first glance. The design philosophy of Sensual Purity, combined with Progressive Luxury, is reflected in generously sculpted surfaces, reduced joints and seamless transitions (seamless design).

The front is combined into a 'Black Panel' unit. Innovative headlights connected by a light band and the deep black radiator grille (Black Panel) form the distinctive face. The exclusive look of the Black Panel radiator grille with central Mercedes star can be enhanced still further: as an optional extra, they are also available with a three-dimensional star pattern. This Mercedes-Benz pattern is available in conjunction with AMG Line Exterior or Electric Art Exterior. The design picks up on the original star of the Daimler-Motorengesellschaft, which was registered as a trademark in 1911.

The EQS is the first Mercedes to offer the option of activating completely new vehicle functions via over-the-air updates (OTA) in many functional areas. Available from launch: two special driving programs for young drivers and service staff, some little games and the demo program "The Best or Nothing". This means that, following the purchase and the initial new-car configuration, some of the features of the EQS can be adapted according to personal preferences. It will also be possible to unlock the rear-axle steering with a larger steering angle of ten degrees. In addition to the classic purchase of individual functions, subscriptions, temporary activations and free test phases are also planned. 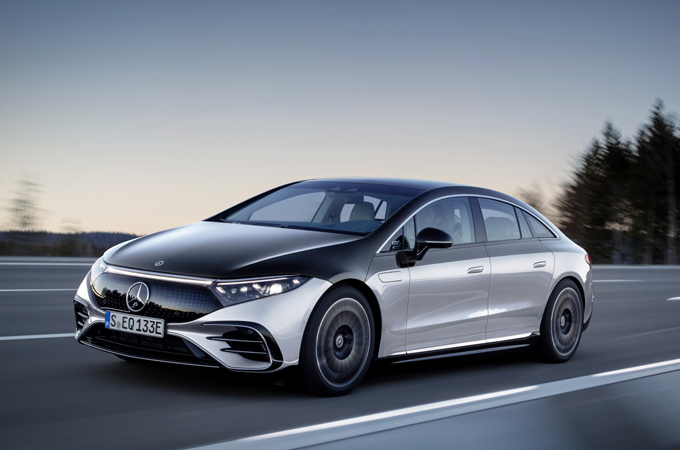 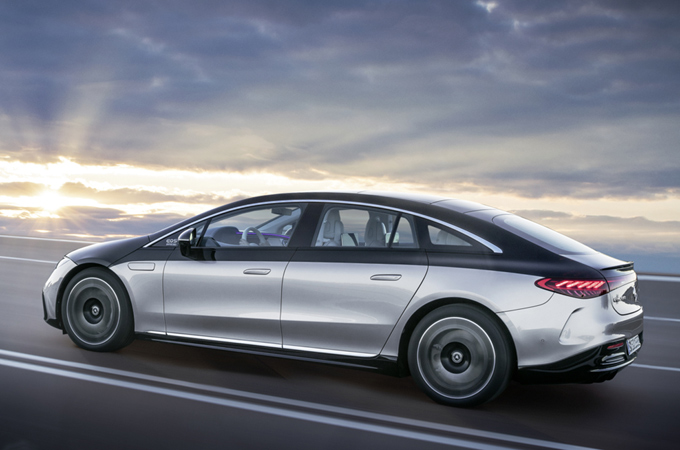 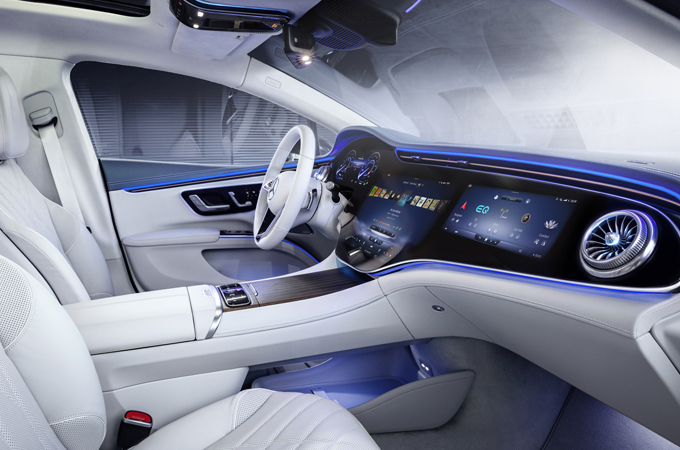