Blancpain’s initiatives to protect and preserve the world’s oceans will now be branded under a common theme.

Titled as the Blancpain’s Ocean Commitment, the concept was unveiled by Blancpain’s President and CEO Marc Hayek at an event held in Cap d’Antibes in France earlier this month, which was attend by dignitaries, members of the press and the brand’s partners.

At the event, the Swiss manufacturer of luxury watches also launched a new limited edition of timepieces named after the new concept, while unveiling a book on Blancpain’s diving watches and the history of underwater exploration, as well as a dedicated website for the new green theme.

The ideas and concepts woven into that first Fifty Fathoms have defined diving watches for the industry ever since, says Blancpain.

In recognition of its close links to diving and its Fifty Fathoms heritage, Blancpain has for many years been a fervent supporter of environmental initiatives to explore, preserve and protect the world’s oceans. Chief among its beneficiaries have been National Geographic Society’s Pristine Seas Expeditions, directed by Dr Enric Sala, and the Gombessa Project of Laurent Ballesta.

Blancpain is proud to have been the first key supporter of both of these initiatives, which are now branded as the Blancpain Ocean Commitment.

Other Blancpain initiatives include partnerships the History Diving Society for the Hans Hass Fifty Fathoms Award, famed free diver Gianluca Genoni, The Economist's World Ocean Summit as well as some of the world’s most renowned underwater photographers.

To call further attention to ocean preservation and protection, Blancpain also unveiled the first piece of a series of limited edition diving watches.

Blancpain has connected the new special limited edition to its global Ocean Commitment by making a charitable contribution in the amount of €1,000 ($1,282) for each watch in the limited series. The total funds of €250,000 ($320,649) will be added to Blancpain’s ongoing support of oceanic environmental causes. In addition, each purchaser of the watch will be enrolled in Blancpain’s Ocean Commitment Circle and given special advantages.

Blancpain also debuted a collectible volume entitled Fifty Fathoms - The Dive and Watch History 1953-2013. This 475-page book, destined to become a valuable and indispensable reference for both dive and watch historians, features more than 600 dazzling photographs and recounts the six decade history of Blancpain’s diving watches and the intertwined history of diving.

Another important introduction was the new Blancpain Ocean Commitment website which offers a unique platform for Blancpain's partners to report and share news and information about the oceans. Through its galleries of stunning high definition photographs, reports on scientific expeditions, news on initiatives and achievements, this new site has been conceived to further the public’s awareness of major environmental issues and to reinforce the importance of protection and preservation. 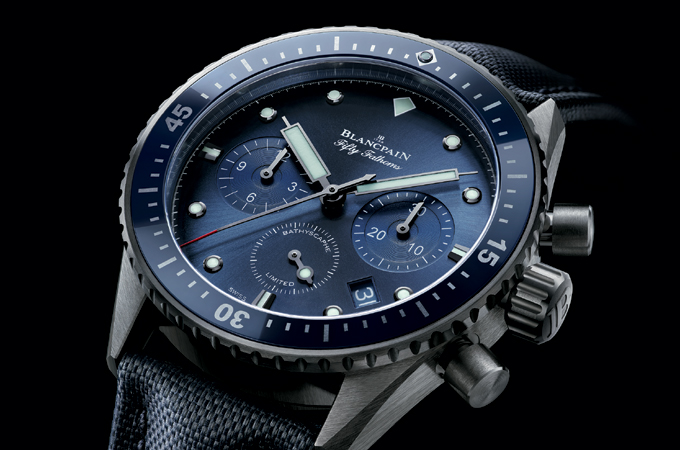