Dassault Aviation’s Falcon 7X has set a new transatlantic speed record, flying between Teterboro in the New York metropolitan area in the US and London City Airport in the UK at an average speed of Mach 0.88.

The 7X, serial number 207, took off from Teterboro Airport at 8.04 am local time on May 2 with test pilot Philippe Deleume and Dassault operational pilot Olivier Froment at the controls and three passengers on board. The aircraft was fully equipped for normal operation with HUD (heads-up display), EVS (enhanced vision system) and FalconCabin HD+ cabin management system. Five hours and 54 minutes later, it touched down on the short 4,000-ft runway at London City Airport.

For most of the 3,465 nm (6,452 km) trip, the 7X cruised at Mach 0.88. Both passengers and pilots reported a comfortable flight – testimony to the precision and smoothness of the 7X’s aerodynamic design and digital flight controls.

The record has been sent to the Fédération Aéronautique Internationale in Switzerland for recognition as an official world record.

“This marks a new achievement for the Falcon 7X, which has consistently set the pace since it was introduced in 2007,” says Chairman and Chief Executive Officer Eric Trappier. “No other large cabin business jet can match the combination of range, comfort, fuel efficiency and operating flexibility afforded by the 7X. No wonder it’s the fastest selling Falcon ever, with 250 produced to date.”

The remarkable efficiency of the 7X was underscored during the outbound flight from London City to Teterboro on April 30. The plane departed runway 27 with four passengers on board and, because of the airport’s short runway, carried a fuel load of 19,700 lbs – two-thirds of the 7X’s 31,940-lb fuel capacity. It reached Teterboro in 7 hours 35 minutes, flying at its optimum long-range speed setting of Mach 0.80. Landing was accomplished in IFR (instrument flight rules) conditions with 2,600 lbs of fuel remaining, more than sufficient to meet IFR reserves requirements.

With its Pratt & Whitney Canada PW307A power plant and ultra-efficient aerodynamic design, the 7X can fly 5,950 nm (11,020 km) non-stop at Mach 0.80. But over shorter distances, it can cruise at speeds up to its maximum operating limit of Mach 0.90.

Moreover, the 7X can fly into and out of airfields like London City, La Mole/St Tropez, France and Saanen, Switzerland that are typically inaccessible to large cabin business jets. The 7X provides the longest range of any business jet out of London City, allowing it to easily serve destinations as distant as New York or Dubai in the UAE.

Dassault Aviation is a leading aerospace company with a presence in over 80 countries across five continents. It produces the Rafale fighter jet as well as the complete line of Falcons. The company employs a workforce of over 11,000 and has assembly and production plants in both France and the US and service facilities around the globe. Since the rollout of the first Falcon 20 in 1963, over 2,250 Falcon jets have been delivered. The family of Falcon jets currently in production includes the tri-jets – the Falcon 900LX and the 7X – as well as the twin-engine 2000S, the Falcon 2000LXS and the new Falcon 5X.

Dassault Falcon Jet Corporation is a wholly owned US subsidiary of Dassault Aviation, France. Dassault Falcon Jet markets and supports the Falcon family of business jets throughout North America, South America and the Pacific Rim countries of Asia, including the People’s Republic of China. 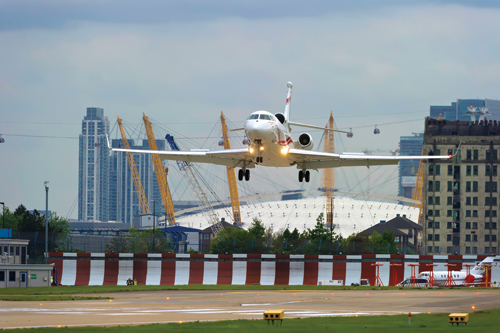 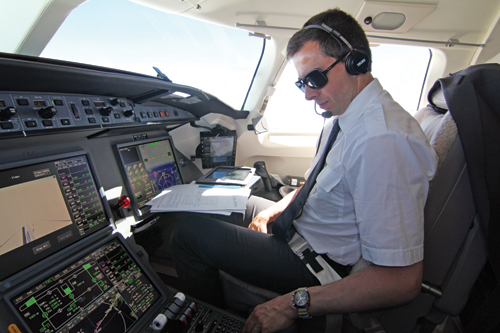