The 296 GTB, the latest evolution of Maranello’s mid-rear-engined two-seater berlinetta, was premiered last week during an online event broadcast on Ferrari’s social media and web channels.

The 296 GTB redefines the whole concept of fun behind the wheel, guaranteeing pure emotions not just when pushing the car to its limits, but also in day-to-day driving situations.

The 296 GTB ushers in an authentic revolution for Ferrari as it introduces a new engine type to flank the marque’s multi-award-winning 8- and 12-cylinder power units: a new 663 cv 120° V6 coupled with an electric motor capable of delivering a further 122 kW (167 cv). This is the first 6-cylinder engine installed on a road car sporting the Prancing Horse badge: it unleashes its massive 830 cv total power output to deliver previously unthinkable performance levels and an innovative, exhilarating and unique soundtrack.

The car’s name, which combines its total displacement (2.992 l) and number of cylinders with the GTB (Gran Turismo Berlinetta) acronym, in finest Ferrari tradition, was chosen to underscore this new engine’s epoch-changing importance to Maranello: it is not simply the living, beating heart of the 296 GTB but also ushers in a new V6 era that has its roots deep in Ferrari’s unparalleled 70-year-plus experience in motor sports.

The 296 GTB’s plug-in hybrid (PHEV) system guarantees it is an incredibly usable car as well as cutting pedal response times to zero and delivering a 25 km range in all-electric eDrive mode. The car’s compact dimensions and the introduction of innovative dynamic control systems as well as meticulously honed aero ensure that the driver will instantly experience its astonishing agility and responsiveness to commands. Its sporty, sinuous design and extremely compact dimensions also visually underscore its exceptional modernity, brilliantly referencing the likes of the 1963 250 LM, the perfect marriage of simplicity and functionality.

As was the case with the SF90 Stradale, for clients who want to exploit the car’s extreme power and performance to the utmost, particularly on the track, the 296 GTB is also available with the Assetto Fiorano package, which includes lightweight features and aero modifications.

The 296 GTB is the first Ferrari road car to sport a V6 turbo with a vee with an angle of 120° between the cylinder banks, coupled with a plug-in electric motor. This new V6 has been designed and engineered from a clean sheet by Ferrari’s engineers specifically for this installation and is the first Ferrari to feature the turbos installed inside the vee. Aside from bringing significant advantages in terms of packaging, lowering the centre of gravity and reducing engine mass, this particular architecture helps deliver extremely high levels of power. The result is that the new Ferrari V6 has set a new specific power output record for a production car of 221 cv/l.

As the V6 turbo is integrated with an electric motor at the rear, the 296 GTB’s combined maximum power output is 830 cv, putting it at the top of the rear-wheel-drive sports car segment as well as making it extremely flexible. This is true both in terms of day-to-day contexts (the 296 GTB has a full-electric mode range of 25 km), and in driving enjoyment (accelerator pedal response is instant and smooth at all engine speeds).

The powertrain assembly comprises a V6 turbo ICE, with the 8-speed DCT and E-Diff, and the MGU-K located between the engine and the gearbox. A clutch is set between the ICE and the electric motor to decouple them in electric-only eDrive mode. Lastly, there is a high-voltage battery and the inverter which controls the electric motors.

Thanks to its 663 cv and 221 cv/l, the 296 GTB’s ICE sets the new specific power output record for a production road car. Central to achieving this result was the introduction of the 120° vee configuration with equally-spaced firings as well as the positioning of the turbos inside the vee which produces a much more compact engine and optimally distributed masses.

Sound-wise, the 296 GTB rewrites the rulebook by harmoniously combining two characteristics that are normally diametrically opposed: the force of the turbos and the harmony of the high-frequency notes of a naturally-aspirated V12. Even at low revs, inside the cabin, the soundtrack features the pure V12 orders of harmonics which then, at higher revs, guarantee that typical high-frequency treble. This Ferrari’s soundtrack matches its performance, creating a sense of unprecedented involvement: a new page has been turned in Maranello’s berlinetta history.

Even to those outside the car, the shrill sound of the engine is instantly recognisable. The first in the F163 engine family, this V6 earned itself the nickname “piccolo V12” (little V12) during the development phase.

This is the first Ferrari with a rear-wheel drive-only PHEV (Plug-in Hybrid Electric Vehicle) architecture in which the ICE is integrated with a rear-mounted electric motor producing up to 122 kW (167 cv) derived from the Formula 1 application from which it also inherits the MGU-K (Motor Generator Unit, Kinetic) moniker. The electric motor and ICE communicate via the Transition Manager Actuator (TMA) which allows them to be used both together to produce a combined power output of 830 cv or decouples them to allow the electric motor to run solo.

Aside from the V6 turbo and the 8-speed DCT already adopted on the SF90 Stradale, Ferrari Roma, Portofino M and the SF90 Spider, the powertrain architecture also includes the MGU-K electric motor positioned between the engine and gearbox, the TMA to decouple the electric motor from the ICE, the 7.45 Kwh high voltage battery, and the inverter which controls the electric motors.

The MGU-K is a dual-rotor single-stator axial flux motor. Its compact size and its structure allowed the length of the powertrain to be reduced which, in the final analysis, helped shorten the 296 GTB’s wheelbase. The electric motor charges the high voltage battery, turns on the ICE, supplies it with additional torque and power (up to 167 cv) and allows the car to be driven in all-electric eDrive mode. The MGU-K’s improved design allows it to reach maximum torque of 315 Nm, around 20% more than previous applications.

The TMA (Transition Manager Actuator) allows very rapid static and dynamic transitions from electric to hybrid/ICE mode and viceversa, thereby guaranteeing smooth, progressive torque. Its control software, which was developed entirely in-house by Ferrari, dialogues with the DCT, motor and inverter software to more efficiently manage ICE ignition and its connection and disconnection to the transmission. Thanks to new generation components, the TMA allowed the design of an incredibly compact transmission: the system has an overall impact on the length of the powertrain of just 54.3 mm. Its architecture comprises a triple-plate dry clutch, a clutch command module in line with the driveline with a clutch control linkage, and ECUs.

The 296 GTB’s dynamic development focused around boosting the car’s pure performance, delivering class-leading levels of driver engagement making full use of the new architectural solutions (V6, hybrid powertrain, shorter wheelbase) as well as improving the usability and accessibility not just of the car’s performance, but also the functionalities afforded by the hybrid layout.

The targets were achieved by honing the architecture and keeping all the main vehicle components as compact as possible, as well as managing energy flows and their integration with the car’s vehicle dynamic controls. New components were developed specifically for the 296 GTB, not least the Transition Manager Actuator (TMA) and the 6-way Chassis Dynamic Sensor (6w-CDS) – a world-first for the automotive sector. There are also new functions, such as the ABS evo controller, which uses the data gathered by the 6w-CDS, and the grip estimation integrated with the EPS.

The Ferrari 296 GTB’s design is the result of the desire of the Ferrari Styling Centre to redefine the identity of the mid-rear-engined two-seater berlinetta by giving it an extremely compact line with an original, modern look. Thanks to its short wheelbase and its monolithic, sculpted structure, the 296 GTB is indeed the most compact berlinetta to emerge from Maranello in the last decade. The typical berlinetta fastback configuration has been abandoned in favour of creating a cabin architecture that visually seems set into an imposing volume – the combined effect of the short wheelbase and the composition of elements, such as very muscular wings, the visor-style windscreen, robust flying buttresses and a new vertical rear screen. These forms produce a highly original cabin silhouette that dominates the overall perception of the car.

The 296 GTB’s impeccably clean, simple architecture seems the work of a single pencil stroke. There are neither artificial optical effects designed to lighten the car’s volumes nor stark colour contrasts. Instead the designers chose the most convincing archetype to give the car a unique identity all of its own, so unique it rewrote the entire rulebook by rediscovering the most authentic principles of Italian car design.

One of the most recognisable aspects of the 296 GTB’s design is its cabin, which has a visor-style windscreen that wraps around onto the side windows. Already adopted on several limited-edition Ferraris, including the J50, and one-offs, such as the the P80/C, this theme has now reached its maximum expression on a road car. The wraparound theme at the front connects organically to the flying buttress theme at the rear, together with a transparent engine cover that showcases the engine.

The 296 GTB’s other rear-end styling feature is its Kamm tail, a surface carved out of a solid volume, that underscores the car’s compact volumes. The upper section of the tail also incorporates a horizontal element that incorporates the taillights and integrated retracting spoiler. With the lights off, a thin “black screen” line runs horizontally the entire width of the rear. When the taillights are on, two strips of light appear on either end of the rear.

The 296 GTB’s cockpit was developed around the new concept of an entirely digital interface which Ferrari first debuted on the SF90 Stradale. This interior layout draws on the latter’s stylistic coherence for its forms. While with the SF90 Stradale the designers wanted to highlight the presence of the advanced technology and underscore a clear break with the past, in the case of the 296 GTB, the idea was to clothe that technology in a sophisticated way. The result is a pure, minimalistic connotation characterised by a powerful elegance that, on an aesthetic level, perfectly mirrors the design of the exterior.

The 296 GTB’s cabin raises the concept of the formal purity of the functional elements to new heights. From a formal perspective, when the engine is off, the onboard instruments go black, enhancing the minimalist look of the cabin. Exclusive Italian leather trim to the seats and trim is further enhanced by the noble technical materials used on the functional components.

Once the Start Engine button is pressed, all of the components gradually spring to life and the 296 GTB reveals its technological glory in the form of an exceptionally modern, ergonomic and completely digital interface. The main instrument cluster is set into a deep cleft carved out of the dashboard trim, itself characterised by a deliberately clean, taut surface. From this styling solution emerges the steering wheel and the instrument cluster supported by two visible structural supports, which taper seamlessly into the dashboard. Completing the picture are two side satellites, each with its own capacitive touch area, and an air vent. The passenger side is very minimalistic with the standard passenger-side display, allowing them to live the driving experience very much as a participant, almost a co-driver. 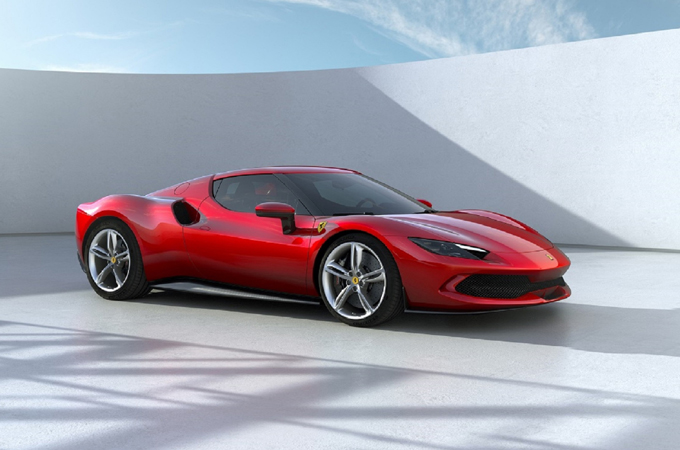 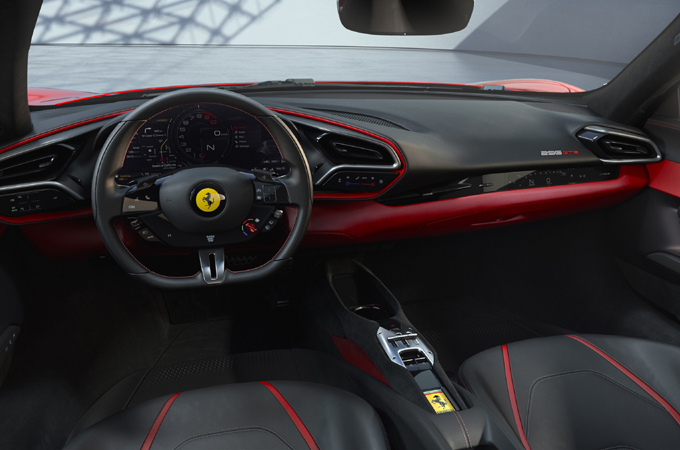 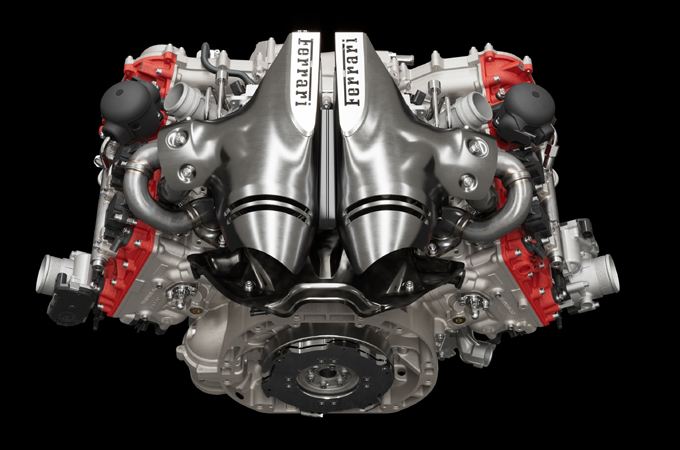 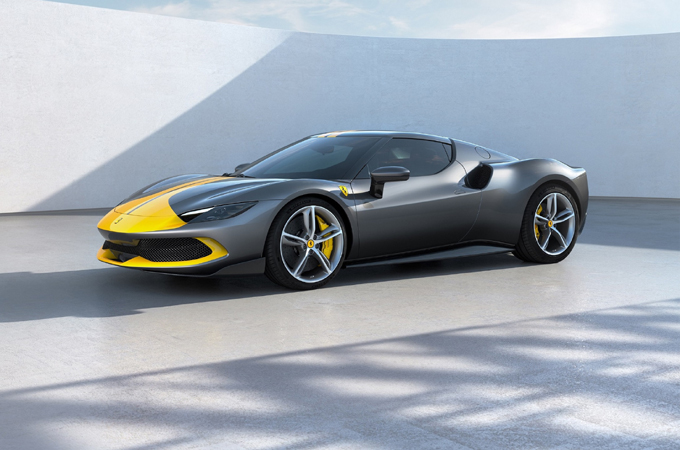 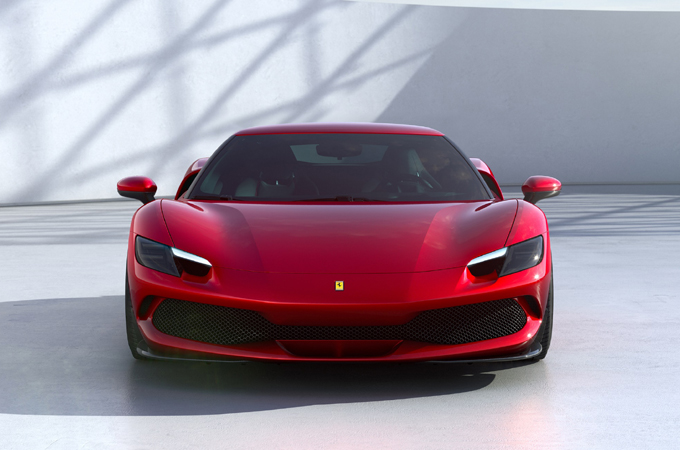