An array of the finest collectors’ watches in the world including what is described as the most important Rolex wristwatch ever made will go under the hammer this weekend in Geneva, Switzerland.

Phillips in association with Bacs & Russo will hold two auctions of these watches this May at the Hôtel La Réserve.

The first, Start Stop Reset, will be held on May 14 and is dedicated to stainless steel chronograph wristwatches of the highest quality and rarity – all produced by the most prestigious watch manufacturers of the last century.

Following the highly successful May 2015 thematic auction Glamorous Day-Date, Phillips is partnering once again with the watch scholar and author Pucci Papaleo for this thematic sale, where for the first time Phillips has produced the catalogue in collaboration with Papaleo and his team. This talented team already created some of the most important watch collectors’ books in recent years.

An event in its own right is the offering of a spectacular Rolex Ref 4113 Split-Seconds chronograph (estimate CHF 800,000-1.4 million/$821,000-1.44 million), for many collectors considered the most important Rolex wristwatch ever made by the firm. Scholarship tells us only twelve examples of reference 4113 were manufactured and all were encased in stainless steel. Never offered by Rolex for public sale, this rare model was presented to a select group of racing teams and their drivers by Rolex who were active in sponsoring racing events at the time. Manufactured in 1942 and mongst the world’s finest surviving examples in terms of originality and quality, this watch is presented in impressive overall condition and has remained virtually untouched.

An exciting selection of vintage stainless steel chronographs by Patek Philippe is also included in the sale. Highlights are, amongst others, the Ref 1463 “Freccero”, which could well be the best-preserved example of this reference known in stainless steel (estimate CHF350,000-550,000/$360,000-565,000). Since its launch in 1940, the desirability of the reference 1463 has never waned. Alongside its ultra-rare sister model, reference 1563, it is the only vintage chronograph model by Patek Philippe fitted with a water-resistant case and round chronograph pushers.

Another highlight of this sale is a historically important Longines A7 (estimate CHF50,000-100,000/$51,000,103,000). This oversized, rotated chrome-plated pilot’s chronograph wristwatch with black dial and military markings was made for the US Army in 1935. The Type A-7 'Avigation' watches were produced by Longines and Meylan in compliance to the US military’s specifications.  For a short period of time, the Type A-7 was also sold to the civilian aviation market due to its specialized technical functions. Featuring a single button pusher incorporated into the crown, this military tool watch allowed pilots to easily start, stop and reset the chronograph to zero. With a massive case measuring 51 mm in diameter, they are true trophy watches for collectors of military watches.

For car aficionados, there’s very rare and attractive Breitling Duograph, Ref. 791, formerly the property of the late Sir Jack Brabham, the three-time world champion of Formula 1 car racing. Brabham won the Formula One World Championships in 1959, 1960 and 1966.  He was the only man to win a championship on a car that he himself made, in 1966. The watch is accompanied by a signed poster by Sir Jack Brabham, along with a letter from his son David Brabham confirming the watch was presented to his father in 1960 after winning the 1960 World Driver’s Championship It carries an estimate of CHF 30,000-60,000/$31,000-62,000).

A final highlight for Start Stop Reset is a beautifully conceived Hublot stainless steel column wheel chronograph, entirely crafted within the Hublot manufacture workshops. This example stands out not only by its impressive skeleton dial, but also by its flyback Unico chronograph in-house movement. As a one-of-a-kind model, the Big Bang Unico timepiece will be sold at auction and all proceeds donated to a charity.

A leading highlight of this auction is one of the rarest and most desirable models of all perpetual calendar chronographs: a First Series Patek Philippe Ref 2499 that has never before appeared at auction. To get a precise idea of this model, one must go back to the reference 1518 from 1941 when Patek Philippe launched what was the world’s first perpetual calendar chronograph wristwatch produced in series. Reference 2499 replaced reference 1518 in 1951 and was made for a period of 34 years. What makes this lot especially exciting is its freshness to the market and its immaculate, hardly ever worn state of preservation. IT has an estimate of CHF800,000-1.5 million ($912,000-1.54 million).

Amongst the top lots of an exceptional selection of Rolex watches is an extremely rare Rolex Ref 6062 featuring a black lacquer, “Star” dial with an estimate of CHF500,000-1 million/$514,000-1.03 million). Reference 6062 is one of only two models ever made by Rolex featuring a full calendar and the phases of the moon, together with reference 8171. The rarest and most exclusive are examples featuring a black dial with eight, five-pointed faceted stars for hour markers. Reference 6062s with such coveted star-shaped hour markers were bestowed the delightful nickname, ‘Stelline’, which is Italian for starlet. Another desirable feature of this watch is the absolutely correct, matching moonphase disk with black sky rather than blue. To date, only four examples are known with this configuration.

This auction will also feature the only known example of a Vacheron Constantin Chronomètre Royal Ref 4907 in white gold (estimate CHF80,000-140,000/$82,000/143,000). Vintage Chronomètre Royal watches are considered to be amongst the finest ever made by any brand. In pristine condition, the case on the present example retains its original brushed and polished surfaces, strong hallmarks, and its crisp Chronomètre Royal engraving on its caseback. This model may be considered a masterpiece from the brand, and research shows that never before has a white metal reference 4907 appeared anywhere on the market.

Also offered at auction is a superb selection of watches with Royal provenance, each featuring the coveted khanjar on their dials, the national emblem of Oman. These include an extremely rare Patek Philippe Nautilus Ref 3700 in white gold – one of only two examples known, an Audemars Piguet Royal Oak A series Jumbo Ref 5402 in steel, a Rolex Daytona Ref 6265 in yellow gold with red khanjar, and a Rolex Submariner Ref 1680 in yellow gold with green khanjar. 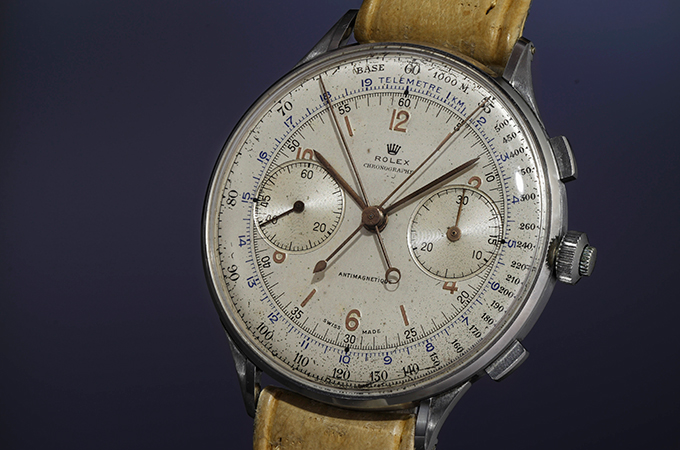 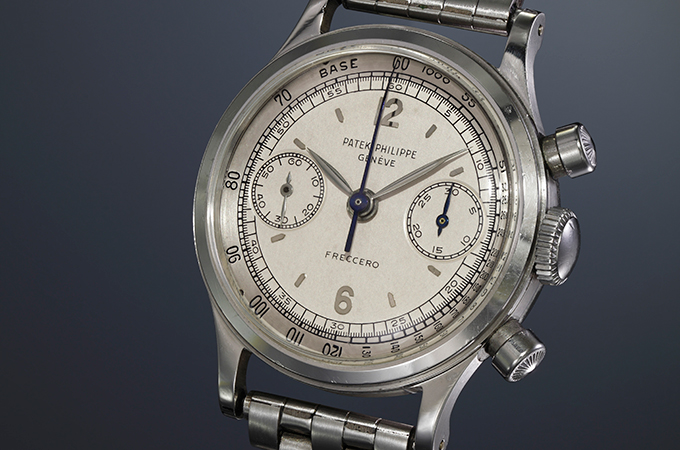 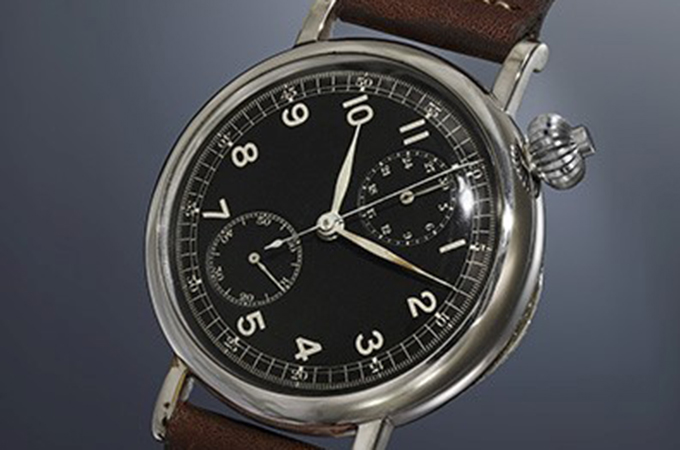 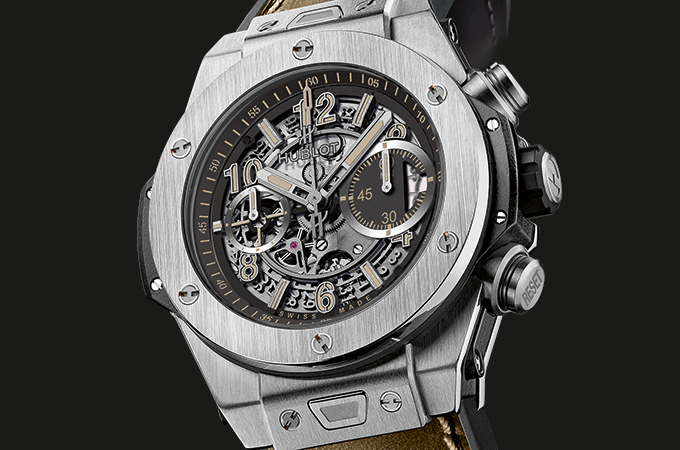 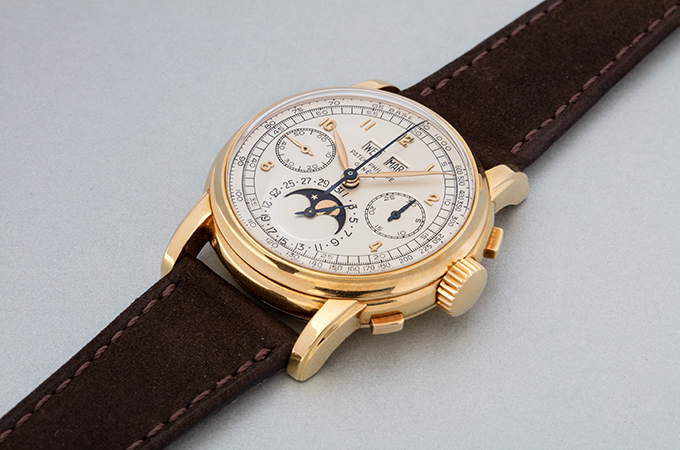 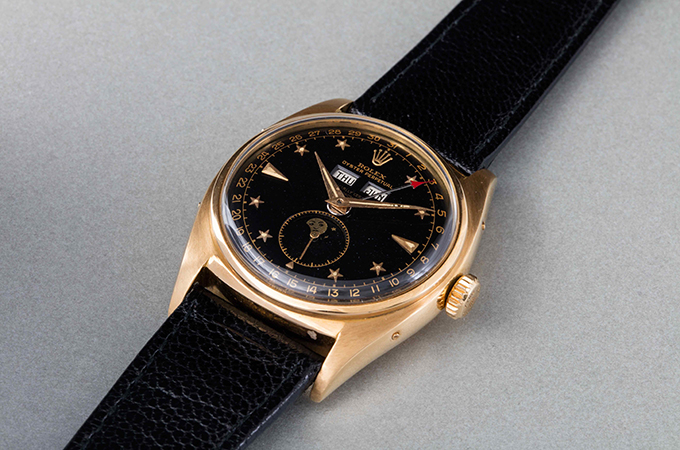 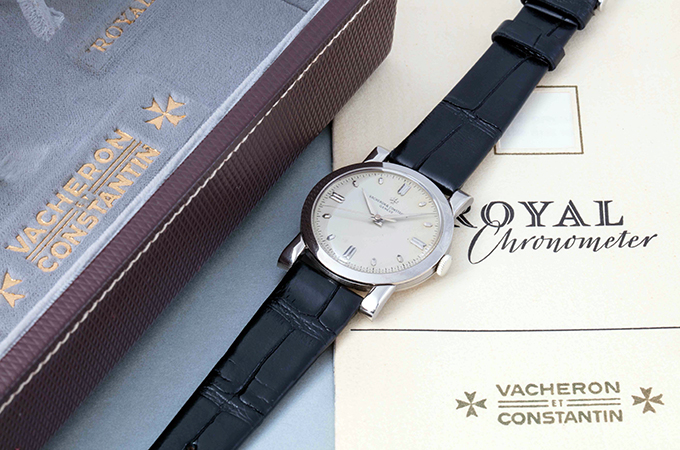 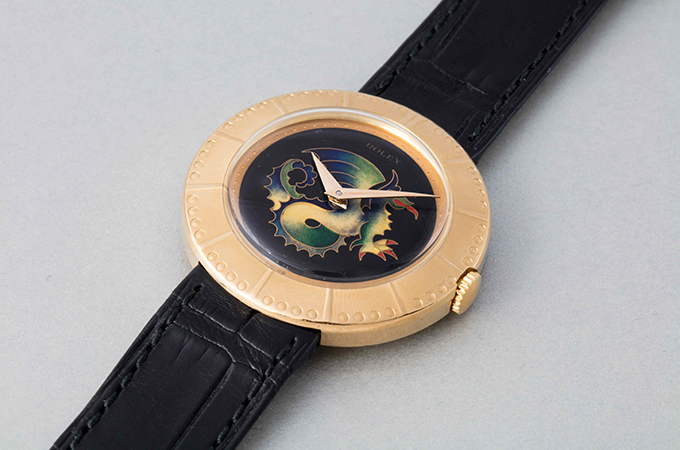