An exhibition of powerful and mesmeric paintings by famed Syrian artist Sara Shamma is set to open at the Art Satwa Gallery in Dubai, UAE.

Tiled Diaspora, the exhibition will run from October 27 to November 30 and feature selected paintings by Shamma from 2012 and 2013.

Shamma has been the recipient of major prizes in Britain and Australia and has participated in important international exhibitions in Britain, Germany and the UAE. In 2010 she was invited to become a United Nations World Food Programme ‘Celebrity Partner’.

The paintings on show at Diaspora possess a special resonance and are perhaps the most powerful works she has created in the course of an already distinguished career. Half of them were created in Syria whilst the rest were made in Lebanon, where she and her two small children now reside.

Shamma’s background makes her the prefect commentator for the troubled times in which she makes her work, and now based in the Lebanon having been displaced by the war from her native Damascus.

The style of the canvases show a masterly and bold approach to painting which is almost three dimensional, with swirls and distorted passages adding an often nightmarish quality to otherwise realistic portraits of subjects including her children.

One is immediately struck by an underlying and powerful sense of anxiety which pervades Shamma’s work and which is particularly pervasive when the paintings are viewed as a group.
In their construction and use of narrative, the paintings call to mind the works of Goya and Delacroix and particularly Fuseli with his celebrated painting The Nightmare. There is also the obvious connection with the great ‘masters of war’ and history paintings such as Delacroix’s The Massacres at Chios, but here there is a major difference - although Sara’s work is rooted in the effects  of war her paintings are avowedly not ‘war paintings’.

“Shamma has had the courage to react to and comment upon what is happening now, particularly the tragedy now unfolding in her native Syria. Her recent paintings are not in any way journalistic, but they resonate with the tragedy of the current situation in her country,” comments art historian Edward Lucie Smith.

Shamma’s influences go far beyond both the current political situation and the tradition of western painting however, Lucie-Smith said, also noting influences from both Latin American Art and the Sufi tradition of the Whirling Dervishes which are evoked in the swirling movement and distortion found in many of the works shown at Diaspora.

In essence, Shamma’s paintings take us on a journey of displacement in an almost cinematic sense, conjuring up the films of Surrealist artists such as Dali and Brunel as they do so. One experiences this perhaps most powerfully in Shamma’s monumental series Q from 2011, that was exhibited in the Royal College of Art in London in November 2013, where the line of paintings which make up this series suggest both a queue of displaced people and the cells from the celluloid of  a moving picture.

These are paintings which have the power to draw you in, to move and unsettle you and as Lucie-Smith comments: “Most people know the much-quoted Chinese malediction: ‘May you live in interesting times’. The impressive images exhibited demonstrate that personal and public misfortunes, the high drama of those ‘interesting times’, do have the power to provoke the creation of major art.

A vernissage will take place on October 27 at 7 pm and will conclude with a curator’s talk with Lucie-Smith and Shamma at 8.30 pm.

A fully illustrated catalogue with Essays by Lucie-Smith will accompany the exhibition. 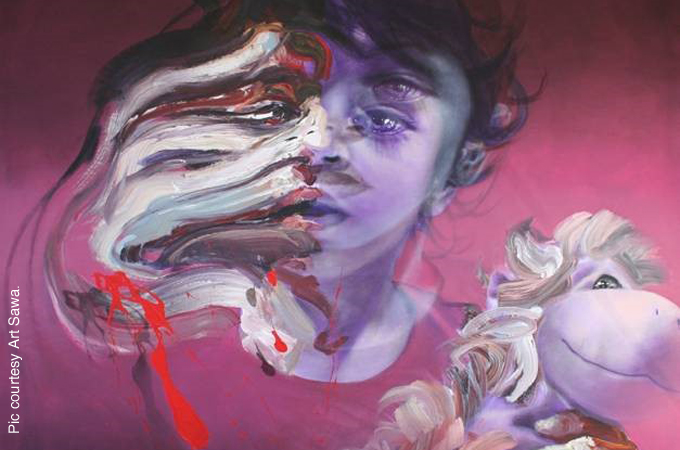